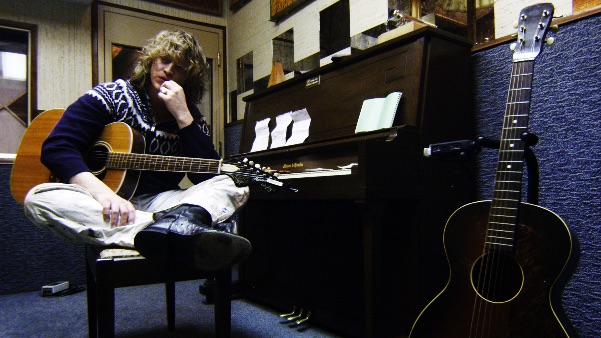 ‘The Mother Stone’is brilliantly ostentatious and psychedelic, built from abrupt detours and schizoid shifts of voice. Shaped by the influence of Jones’ formative encounters with the Beatles’ White Album and Syd Barrett’s solo work, ‘The Mother Stone’ is a parade led by multiple unhinged narrators who rail against the universe, profess their love and vacate the stage before we can ask them a question.

Born in Garland, TX, Jones has been writing and recording music since age 16, around the same time he started acting professionally (Get Out, Stonewall, X Men: First Class, Three Billboards Outside Ebbing, Missouri, Twin Peaks, The Florida Project, Friday Night Lights, etc). He played in a band called Robert Jones briefly, but it was following a breakup that the songs really started coming hard and fast. In the ensuing years he’d spend a lot of time carrying unrecorded songs around in his head, waiting for a chance to record them in marathon sessions in his parents’ barn. “I started writing record after record after record after record, because I didn’t know what to do with myself,” says Jones. “It was a good way of healing. And it felt like as soon as I started doing it, it felt like it needed to happen all the time.” Sometimes the ideas fused together, one chapter to the next; this is how songs grew into seven-plus-minute epics like the ones on ‘The Mother Stone’. His back catalogue is around seven hundred songs deep— a whole discography of full albums, most of them unheard outside the barn, at least for now, thanks to a pivotal meeting with Jim Jarmusch.

“I was a big fan of his work,” Jones says, “Instead of wanting to talk, I thought I’d write him a piece that would somehow let him know who I was.” He spent a few nights composing a new instrumental work for solo piano and showed up ready to play it for the director at their meeting— which turned out to be at a diner where the amenities did not include a piano, so they had a conversation instead. Jones slipped Jarmusch two collections of songs from the barn, most of them up to eight years old at that point. Jarmusch liked what he heard, told Jones he should talk to Sacred Bones founder Caleb Braaten, and before long Jones was making ‘The Mother Stone’ — whose brassy and theatrical “Flag Day/The Mother Stone” incorporates that piano piece Jones wrote to explain himself to Jarmusch.

“I had no idea what an astounding and unusual musician Caleb Landry Jones was until he gave me some of his music to listen to two years ago” says Jarmusch. ” Oh man, I don’t even know how to describe it!  But I asked Caleb if we could get it to Caleb Braaten at Sacred Bones!  And now, thanks to these two Calebs it’s being delivered to the world – a strange and beautiful gift!”

Soon after coming together with Sacred Bones, Jones ventured to Valentine Recording Studios, where everyone from Bing Crosby to Frank Zappa once logged time, to record with producer Nic Jodoin. Jones brought his collection of battered Yamahas and Casios up from the barn and played them alongside vintage equipment from Jodoin’s collection. Working in a real studio for the first time gave Jones a chance to finally slow his creative process down. They built the songs up from acoustic guitar, let them sit a while, circled back.

So here Sacred Bones present the first glimpse into the barn; a collection of fifteen songs that shoot into outer space and back again, flitting from the grand to the obscure. Bringing together wholly contrasting worlds of sound and colour, Caleb Landry Jones journeys through a kaleidoscopic world of his own creation – full of imagination, inspiration, drama and emotion. It makes for a thrilling and exhilarating ride.

‘The Mother Stone’ will be released on May 1st via Sacred Bones. Pre-order here.