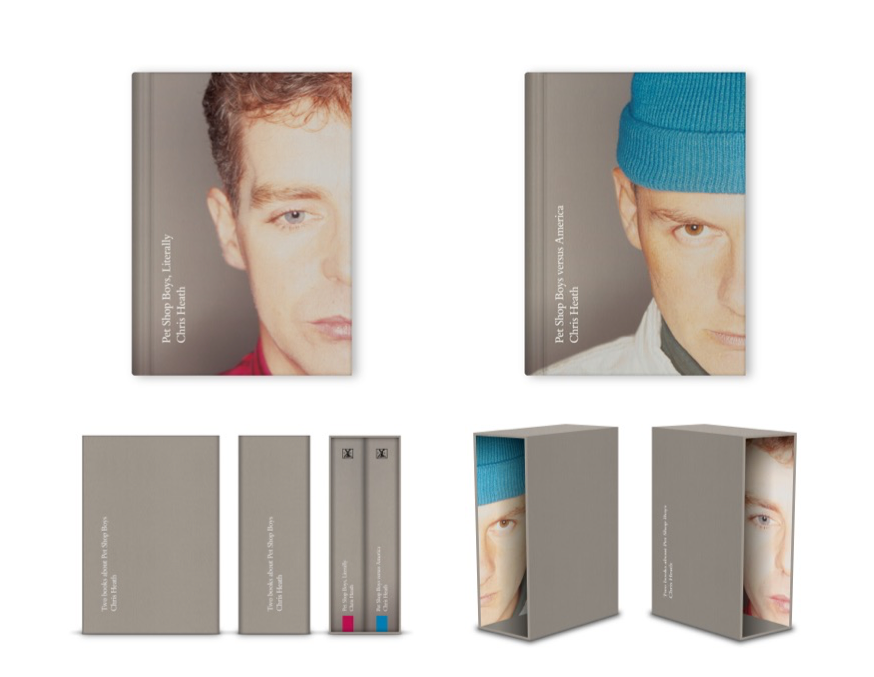 Two books by Chris Heath from the early 90s, which document the rise of PSB and give behind-the-scenes access to their first experiences of touring are soon to be reissued. Pet Shop Boys, Literally and Pet Shop Boys Versus America will be published in hardback on March 19th by William Heinemann. These reissues have been redesigned with new cover artwork by Farrow and include new introductions by Neil Tennant and Chris Lowe and new afterwords by Chris Heath. A limited-edition slip-case with both books included, is available exclusively for pre-order on the PSB website here. Standard editions also available to pre-order here: Literally / Versus America. A limited number of signed copies of both books will also be available to pre-order in selected stores:

In 1989, for Pet Shop Boys, Literally Neil Tennant and Chris Lowe invited journalist Chris Heath and photographer Lawrence Watson to shadow them around Hong Kong, Japan and the UK, as they embarked on their first-ever tour. Then in 1991, for Pet Shop Boys Versus America, the duo toured North America for the first time, taking with them a sizeable, theatrical production. Chris Heath again accompanied them, as did the legendary rock photographer Pennie Smith.

The BFI has announced it is to release a restored version of Pet Shop Boys’ 1988 feature film, It Couldn’t Happen Here, directed by Jack Bond and starring Neil Tennant and Chris Lowe alongside Joss Ackland and Barbara Windsor. Unavailable worldwide for the last thirty years, the film has been newly remastered by the BFI from a 4K scan, for release as a limited-edition Blu-ray/DVD set on June 15th. The Blu-ray/DVD is available to pre-order here.

The re-release will be launched with a special preview screening at BFI Southbank on April 3rd, 2020, preceded by an on-stage Q&A with Neil Tennant, Jack Bond and choreographer Arlene Phillips. Tickets will be listed at www.bfi.org.uk/southbank on February 24th and will be on sale as follows.

It Couldn’t Happen Here was released in UK cinemas in July 1988 and subsequently on VHS video, but has never had a DVD or Blu-ray release before. As well as a 48-page book containing new writing, the discs will be accompanied by a collection of extras, including a brand-new feature commentary with Jack Bond, co-writer James Dillon and cinematographer Simon Archer.

Pet Shop Boys recently released their fourteenth studio album ‘Hotspot’. The album was released on January 24th and charted at number 3 in the UK, German and Spanish album charts. They kick off their 2020 world tour, Dreamworld: The Greatest Hits Live, on May 1st in Berlin.