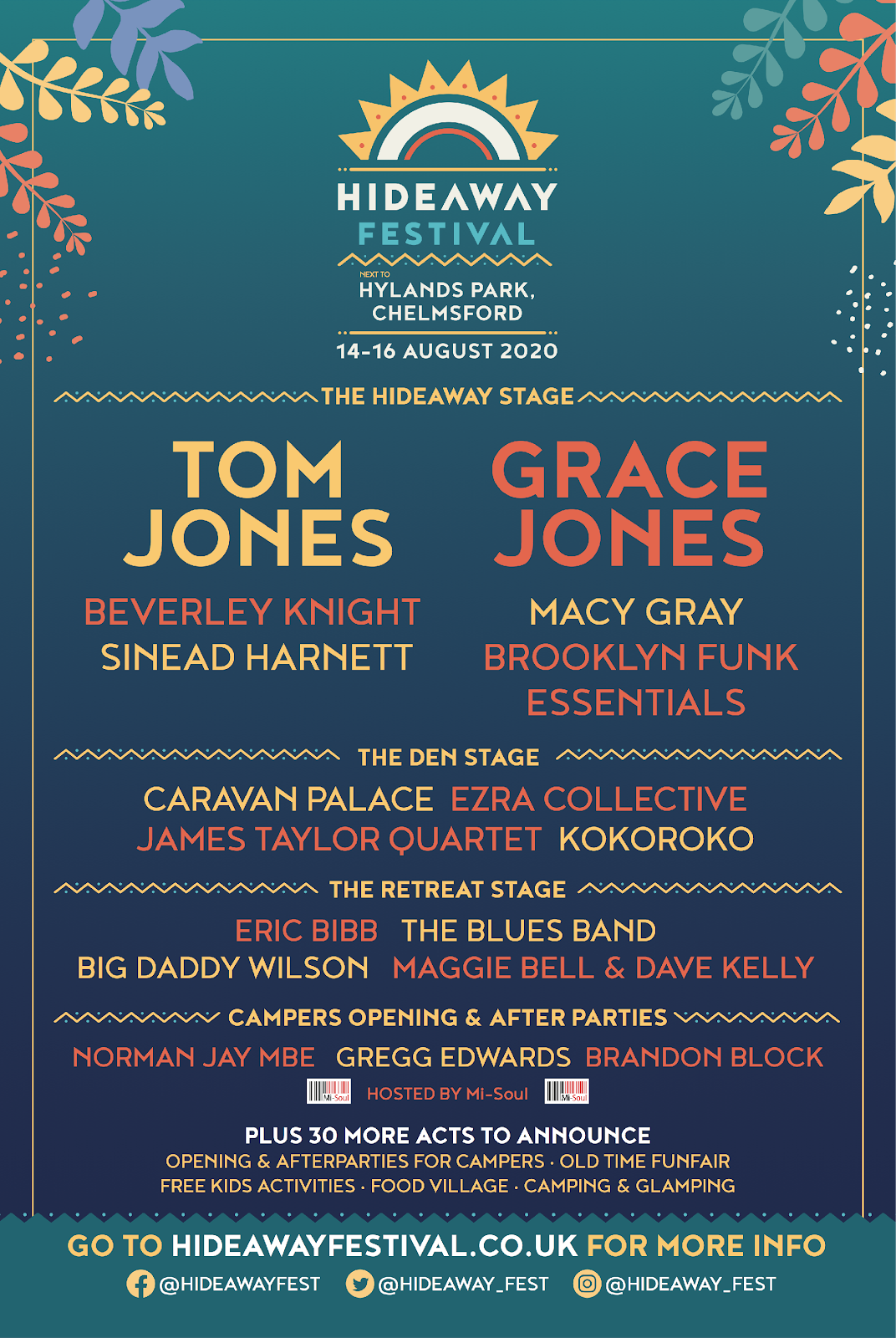 Today sees the announcement of Hideaway Festival, a brand new festival for 2020 in the heart of Essex. Taking place next to Chelmsford’s Hylands Park, Hideaway is a weekend of amazing music and family fun that changes everything you know about festivals, making it an unmissable weekend in the summer calendar.

Kicking off strong, the festival has announced its headliners with none other than the legendary Tom Jones headlining Saturday night, and cultural superstar Grace Jones topping the bill on Sunday.

One of the most iconic voices to ever grace the music business, Tom Jones is an artist like no other, and looks set to set the stage alight on the first night of Hideaway 2020. Fresh from his current role as superstar coach on The Voice, fans old and new can expect a wealth of hits from his back catalogue, including ‘What’s New Pussycat?’, ‘Delilah’, ‘It’s Not Unusual’, ‘Sex Bomb’ and many many more. A true original, Tom Jones has one of the most celebrated careers in music, not to mention his unmistakable voice and cracking stage banter. Expect a suitably mammoth performance from the Welsh icon.

In what is set to be a rare opportunity to delve into the mind of one of the world’s true cultural superstars, Grace Jones‘ set at Hideaway is destined to be a true landmark moment. Celebrating fashion, artistry and a sense of extravagance not seen in modern pop, her influence remains as powerful as ever, and is an immeasurable force of nature in modern culture.  One of the first artists to vigorously morph and bend genres to her will, Jones’ landmark release ‘Slave To The Rhythm’ remains one of the most critically revered and beloved albums of all time – straddling concept, style and glamour into a mix that’s not been bettered to this day. Needless to say, Grace Jones‘ headline set is set to be one that’ll be talked about for years to come.

Hideaway is also honoured to add whisky-voiced titan Macy Gray to the lineup, for what promises to be a stunning rare performance, treating fans to hits from her expansive repertoire.

Fresh from the West End, the incomparable Beverley Knight also joins the lineup complete with her undeniable powerhouse vocals, her set is bound to be unmissable and perfect for an August weekend.

The Den Stage is going to be the place at Hideaway to catch some of the hottest Jazz talent across the weekend, with a host of incredible names joining the line-up. Taking the jazz world by storm and opening up the genre to a new audience, the outstanding Ezra Collective will make their mark at the very first Hideaway fresh from sell out shows across the globe – helping to redefine a new exciting wave of jazz sweeping culture as a whole. Modern afrobeat pioneers KOKOROKO look set to claim their spot as one of the festival’s favourites, blending style and charisma into one magical mix on The Den Stage. Representing the bustling world of electro-swing, the incomparable Caravan Palace also join the list of names for Hideaway 2020, alongside The James Taylor Quartet.

Offering festival-goers the chance to get away from it all, The Retreat Stage lives up to its name, and will be a sanctuary on the festival site playing host to a wealth of legends. Leading the charge is blues legend Eric Bibb, who is making a rare stop off in Chelmsford for what promises to be a stunning performance. Alongside him will be another icon, Big Daddy Wilson, whose emotive blues songs will no doubt resonate greatly with the Hideaway audience. Maggie Bell and Dave Kelly will also play over the weekend, both as a duo and as part of The Blues Band, which looks set to be nothing short of incredible.

Hideaway is an invitation for everyone to escape reality for a weekend of infectious fun, community spirit and proper weekend festival experiences, and for those deciding to camp, the legendary Norman Jay MBE will be hosting a campers only opening party on the Friday night, kicking the weekend off in style.

Bringing together world-renowned headliners and exciting new talent, Hideaway boasts a diverse and thrilling lineup, guaranteed to make this festival truly unforgettable. With ticket prices starting as low as £42.50, and the best value for money family festival ticket on the market, it’s a festival perfect for both the local community and those from further afield.

Speaking about the first ever Hideaway Festival, organiser Roy Trickett said: “
Hideaway Festival has been in the planning process for 2 years and I felt that there was a need and a gap in the market for Essex. We’ve worked hard to create a festival that is friendly to all with a relaxing and entertaining vibe perfect for families. This is a labour of love that we can’t wait to show off this August.
Split between three stage areas, the Main Stage being more Soulful, The Den Stage focusing on Jazz and lastly the Retreat Stage focusing on Blues – there’s a truly a whole range to explore at Hideaway. We are delighted that Tom Jones, Grace Jones, Macy Gray and Beverley Knight to name but a few will all be joining us for our inaugural weekend, bringing some incredible performances that I know we’ll be talking about for years to come. See you all there!”

Hideaway is bringing together huge headliners, a wealth of new talent, and a keen eye for family fun, and looks set  to be a  truly remarkable weekend – the start  of something truly incredible in the Essex festival scene.