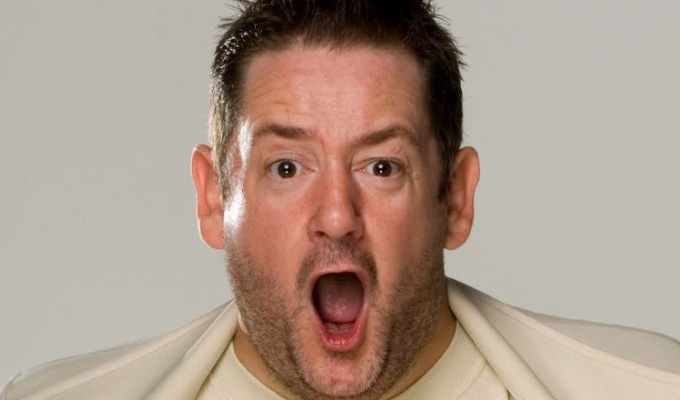 King of British comedy Johnny Vegas is to make a momentous return to the stand up circuit later this year with a live tour. Johnny has rescheduled his original dates to later this year. It is hoped the event will be something for fans to look forward to once the UK is over the coronavirus.

To acknowledge the amazing job the NHS is currently doing, promoters M&B have worked with Johnny to offer 1000 FREE tickets for NHS workers in areas where he is performing.

Vegas has long been a huge supporter of the NHS. He has also teamed up with a number of local charities to help get essentials to those to vulnerable residents and NHS staff during the coronavirus outbreak.

This is the first time Johnny has toured with a live stand up show in over 10 years. Tickets are on sale now via www.easyticketing.co.uk.

Dates for the tour are:

From BBC Dickens adaptations to Benidorm and Ideal to the PG Tips ads, Johnny Vegas has become one of Britain’s best-loved comic actors. But before he’d ever drank tea with a knitted monkey or made himself the exception that proves the rule in terms of the predictability of TV panel game regulars, Johnny Vegas was perhaps the most fearlessly confessional stand-up comedian this country has ever produced. This show marks a return to his roots and is an incredible opportunity to witness one of the finest stand-ups of all time.

Johnny’s unique abilities as a live performer are the stuff of legend. With his trademark potter’s wheel and Butlin’s style singalongs, Johnny has created a sensation wherever he has played, winning the acclaimed Festival Critics’ Award at the 1997 Edinburgh Festival, and being nominated for the Perrier Award.

Vegas quit stand up over 10 years ago stating at the time that he was disillusioned with touring as the more famous he became, the less of a challenge it was to win over audiences, He hinted he might return to the comedy circuit with a new show at some point because he needed ‘closure’ on his stand-up.

Since then Johnny has been a regular in front and behind the camera as an actor, writer, director and comedian known for his alter-egos, surreal humour and unique voice.   He has appeared in programmes like Benidorm, Bleak House and, Mr Stink. and played drug dealer Moz in the BBC black comedy Ideal. Johnny has also written and directed series 4 and 5 of Moving On. Other notable roles include Geoff Maltby in the ITV comedy series Benidorm and Eric Agnew in the BBC sitcom Still Open All Hours.

Angelos Epithemiou is the creation of critically-acclaimed performer, Dan Renton Skinner, who has starred in blockbuster films such as The Spy Who Dumped Me, High Rise, and Swallows and Amazons for BBC Films and such TV serial-classics as The Tracey Ullman Show, Friday Night Dinner, and The Wrong Mans.

He got his break in 2009, when he became a permanent team member on the revival of Shooting Stars, replacing Johnny Vegas on Ulrika Jonsson’s Team B, before becoming the scorer.

NHS workers can apply for a free ticket by emailing proof of NHS employment to info@easyticketing.co.uk