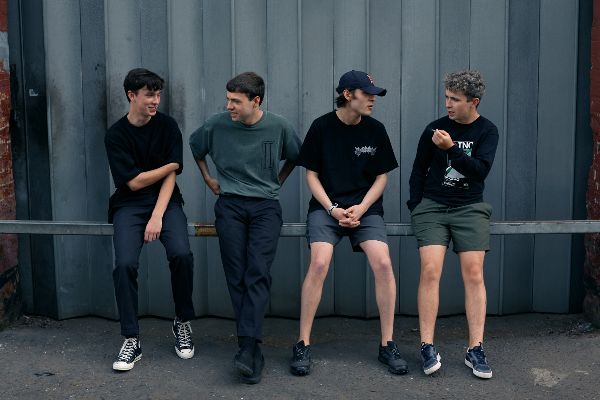 The Night Café have shared a new video for ‘Please’, filmed in isolation.

‘Please’ is taken from the Liverpool quartet’s acclaimed debut album 0151, which was released in August 2019 and featured the singles ‘Mixed Signals’,  ‘Turn’ and ‘Addicted’.

The album is without a doubt the perfect encapsulation of The Night Café’s development as a band, embracing the nuances that drew fans to them in the first place, whilst also bringing deeper, darker elements into play. It’s an accomplished, forward thinking debut that came to define the alternative landscape in 2019.

Speaking about the new video for ‘Please’, frontman Sean Martin said: “The idea for to film the video on our webcams came from that we obviously can’t see each other at the moment, but mainly because wanted to have something to give/show people who are losing their minds having to isolate due to Covid-19 and it felt like a much more personal way to shoot a video.

It kind of worked out perfectly to suit the song though, I always thought ‘Please’ would be fun to make a video for. I felt so invested in the idea from the moment I thought of it, I just dropped everything else and focused solely on the video. The boys sent me clips of them playing the song a few times and it just went from there. Really funny way to make a video though, makes you miss seeing each other more in these weird times. I’ve never made a video before though so this was a fun challenge for myself. Josh is usually the man for that, he made all our earlier vids plus a heavy merch ad which is still my favourite TNC vid to this day, even though it’s not for a song.”

The video comes in the wake of some rescheduled headline tour dates with the band now set to hit the road in September/October for a run of shows including London’s Electric Ballroom, tickets are on sale now.

The Night Café will play live on the following dates…