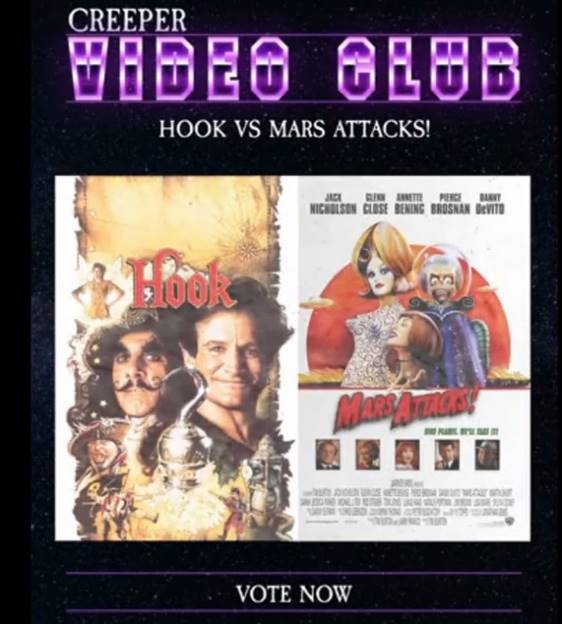 CREEPER invite their fans to join them at the inaugural CREEPER Video Club, which commences today at 8pm UK time.

The CREEPER Video Club will see all six band members host a film via the Netflix Party app. It offers the chance for CREEPER and fans to simultaneously watch a film while using the group chat to discuss the movie, the band or anything they fancy.

What’s more, fans get to vote for their choice of film via the band’s social media accounts. A poll ran until 5pm yesterday, which offered the choice between Hook or Mars Attacks! The films are:

Hook: Stephen Spielberg’s fantastical adventure from 1991 stars Robin Williams as a Peter Pan with a twist. In this update on J.M. Barrie’s timeless tale, Peter Pan is now an adult who has forgotten about his childhood escapades. But circumstances quickly force him to return to Neverland.

Mars Attacks!: When the world is circled by flying saucers, everyone is relieved to hear that the Martians have “come in peace.” Yet the reality is somewhat different. As the tagline states, “Nice planet. We’ll take it!” Tim Burton’s 1996 sci-fi comedy features an all-star cast, plus a score courtesy of Danny Elfman.

Further CREEPER Video Club events will be announced in the near future.