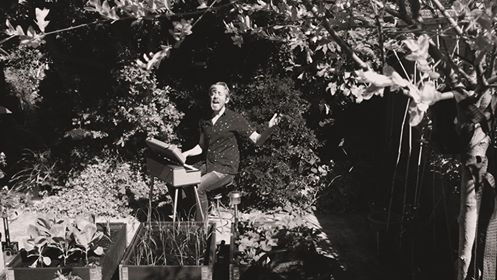 INTERVIEW – DAVID DEVANT AND HIS SPIRIT WIFE ON BRIGHTON, BRITPOP AND THEIR FIRST ALBUM FOR 15 YEARS.

David Devant & His Spirit Wife have always been outsiders.  Originally coming to the fore in the mid-90s, their theatrical live shows and tongue-in-cheek lyrics meant they never quite fitted into the Britpop pigeonhole, despite a sharing a similar love of Bowie, The Kinks and shining a light into the more eccentric corners of English life with their songs.  They’ve never stopped gigging, but their new album ‘Cut Out and Keep Me’ is their first for 15 years.  We decided to quiz the band’s frontman Vessel and drummer Professor Rimshcott on their return.

Hi there David Devant & His Spirit Wife…  Introduce yourselves and tell us what you all do.

Prof: I’m Professor Rimshcott and I play the drums and Casio keyboard – sometimes at the same time.

Vessel: Hi, I’m the Vessel, are you in yet? I facilitate vitality and cosmic entanglement through the medium of song.

Obvious one to start with – how are you all coping in lockdown?  Any ludicrous DIY haircuts worthy of mention?

Prof: Lockdown is ok. Unlocking could prove tricky. We’ve been broadcasting the spirit of kindness.

Vessel: Wise words from theProf there. As you may know we have always been curious about reversing the effects of linear time. Most obviously in the song ‘Parallel Universe’, which predicted the existence of a universe where time runs in reverse. This was due largely to our love of rhyme. Rhyme is an embodied way of feeling meaning. Sounds silly but it’s actually very serious because feeling is what will make unlocking easier. We have experienced the curious freedom of having restrictions during lockdown and creating in this realm leads to remarkable aesthetic discoveries. I call this backwards causality because feeling or aesthetic (as opposed to anaesthetic) is more intelligent that data processing. We need Foz? (guitarist James Foster) here to talk about haircuts as he has been very experimental over the years. I prefer a wig. Wigs are fun but having said that a lot of our lockdown performance videos have seen the wig left on the bench.

You released ‘Cut Out and Keep Me’ recently, your first album for 15 years.  Why such a gap?

Prof: An absence of global pandemics over the last 15 years has meant that we’ve been running around doing lots of other things as well as the band. Building empires and conducting independent studies. Continuously gigging.

Vessel: I think we’ve all been doing stuff but we’ve always been close as a band. Deciding to make the album was just a practical step. Creative collaboration is so important and to be able to do this with people you trust is to good a thing to pass by.

Why did you go for that title?  What does it mean?

Vessel: Right from the beginning Devant have loved creating printed ephemera – the stuff that fans love to collect. We used to make a programme for every gig with the songs listed in advance and these came with a pair of cardboard spirit specs. There can be something thrilling about a printed cut out paper doll of a pop star. ‘Cut out and keep me’ is a phrase that captures the longing we can’t quite pin down and that can be a useful feeling if you don’t unpack it. It’s what Eliot calls the unremembered gate.

Talk us through the album, what you were trying to achieve, what are the key songs?

The Vessel: The main concern was seeing what happens when we make a record together. Let the magic happen. For me it’s not about my taste or opinion its more about the wonder of letting something emerge. Happy accidents that you take care of and apply conviction to. ‘Sublime’ is a good example of this. We arrived at Foz’s house and he had a tiny toy piano that played a wonky scale. We played around trying to match this and that became the verse.

After a while of playing in quite a trance-like way the chorus arose in the ether. I had been mulling over the idea of the sublime (a phrase I have ambivalent feelings about) and it became totally edifying. I love how a song can take a phrase and make it feel resonant in a way that thinking alone can’t do. As the song says we’re right over the hill and it’s making me feel sublime.

The first song was ‘Cut Out and Keep Me’ which was an old song but I had never finished the lyrics and so didn’t like playing it although we had played it live without me knowing what I was going to sing. Now that it’s finished I’m much happier playing it live.

‘Sally’ was written in a great band jam kind of way. I felt like a real beat group creating it, we all literally wrote a little part of it. I had the lyrics in about four notebooks and spliced them together very quickly.

‘Here I Am’ is one that I wrote in my personal lockdown realm, which is when songs tend to emerge for me. That’s to say when I’m not in the realm of everyday time. I was sitting in the backroom and I had left a Monochrome Set album playing in the other room. It felt sumptuous and as I’m hard of hearing anyway I kind of wrote an idea of what the music might sound like. That song is the one that looks at memory and tries to ask if that is really what we are or are we something more emergent? Or a constant flow? I wanted to celebrate my relations a bit though. My Aunty May was a real warrior nursing sister who got pleasure from her collection of glass paper weights and played a home organ, which she taught herself after she won it in a competition.

You’ve also just made a lockdown single with two songs, ’Taking My Time’ and ‘When Nature Calls’.  What difficulties did making them and the accompanying videos present under these restrictions?  What are they about?

Prof: I think we are always interested in the effect of strange parameters on the creative process so this has been a good thing to get to grips with. It’s only technology and time and space. Just like playing together with different amounts of each. Answering the challenge has revealed some intriguing results. It’s helped in shaping new meanings from familiar things.

Vessel: They were both really great to record in a remote way. ‘Taking My Time’ is one of our earliest songs, which only existed as a demo and ‘When Nature Calls’ is our newest song. I loved working on the video for ‘When Nature Calls’ as Professor has such an expertise in photography. He sent his initial version, which was beautiful and I filmed myself in the garden and tried to harness the same kind of precision. There was a nice happy accident in that we had a night cam that had filmed some foxes and this led to me using a much wider shot.

The process of collaboration is sublime because it’s a chance to keep on learning from each other and from your surroundings. The foxes had a role in the cinematography but Prof’s eye for sumptuous imagery is something I also learnt from. We both love a film called ‘Meshes of the Afternoon’, which Prof mentioned led to him using black and white. That film, by the way, is on the cover of Velocity Girl by Primal Scream and as a film has the ultimate lockdown aesthetic – so creative and darkly playful.

You’re often mentioned in the same breath as Britpop – even though you’ve outlived it by two decades are so.  Does that bother you?

Prof: Someone actually said to me after the last broadcast show that we sounded Britpop, which is the first time I remember that accusation. I feel like Britpop was a short but vivid memory that flittered into view for a while then went. But as Vessel so eloquently says, “what is memory?”

Vessel: Like bands and music itself Britpop was originally a much more fluid and emergent phrase. It incorporated Goldie and Minty but then became Cast and Oasis. I don’t think we’ve ever really successfully been part of a movement but have been entangled with a few such as Romo (remember that?). ‘Autumn Almanac’ by The Kinks is a great example of Britpop, so surely it’s not all bad.

You’re based in Brighton, which must be a pretty lovely place to be during an idle summer.  What influence has the city had on you as a band and as people?

Prof: It is delightful, but it feels a million miles away.

Vessel: On the new album there’s a song called ‘Miracles Happen’ which is about the spell binding effect of my first visit to New York. Before I went Prof told me about Rem Koolhaas’ book ‘Delirious New York’ so that when I actually got there it was beyond my wildest dreams. That song is essentially just a list of real-life events but feels magical. Our first single ‘Pimlico’ is about the kaleidoscopic experience of living in the city which can be troubling but also incredibly sexy because of the intensity of creativity around you.

What’s the first thing you’re all looking forward to doing when lockdown ends?  And as a band, what will you be planning for the post-madness period?!

Prof: To play all the gigs that got cancelled. Making new records and making new films. After the gigs share a beer with some of our loyal followers and maybe try to figure out what this was all about.

Vessel: Yes, I think we’ll continue at our gentle pace and enjoy making music and art together. Hopefully contribute in a small way to a shift towards a kinder creative culture before the drive to define relations in economic terms returns in full on armoured water-canon style. All done by kindness.