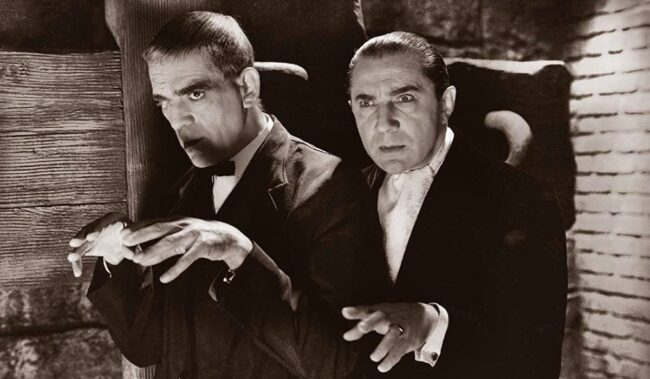 For a horror fan like myself, the latest release of three Universal Edgar Allan Poe adaptations starring Bela Lugosi is very welcome. The early 1930s and the spate of films that followed (in the first wave of horror films) until 1936 are rightly often referred to as the Golden Age of horror movies. All the films were made by Universal Studios with a couple of exceptions including Rouben Mamoulian’s Dr. Jekyll and Mr. Hyde (1932) for Paramount and Mad Love (1935) for MGM. Otherwise, the majority were made by Universal with the first being an adaptation of Dracula (1931) starring Hungarian stage actor Bela Lugosi. The next film, made a few months after was James Whale’s Frankenstein starring Boris Karloff. Both are classic gothic treatments by key 19th century Gothic writers Bram Stoker and Mary Shelley respectively; other monsters such as the mummy, the invisible man and werewolf were still to be made. Inevitable, therefore, that other gothic writers would get the treatment and equally inevitably the source would be Edgar Allan Poe. None of the three films included in the Eureka Entertainment collection are what could be called faithful treatments of Poe’s writing, unlike say the iconic and relatively faithful interpretations of Dracula and Frankenstein. What all three films have though is the star of Dracula himself: Bela Lugosi. Bela brought with him a mittel Europe style to all the roles.

The first of the films made in late 1931 is Murders in the Rue Morgue (1932). It was Lugosi’s first horror film since he was in Dracula, but is also an apology to Lugosi (rejected by Lugosi himself) and Florey for not having been the star and director respectively in the big hit that was Frankenstein (1931). It is a mixed bag and a loose adaptation of Poe other than the phorensic aspect and ape story. It is a bizarre tale from Poe that has a Dr. Mirakle (Lugosi), a sideshow performer with Erik the ape who he tries to find a female mate for the ape, a human one. Of course when the story was written, it played with Darwin’s evolutionary theory but unsurprisingly caused upset with the censors and the powerful Catholic League of Decency in this pre-code film (something it would not have gotten away with a couple of years later). In the rest of the film Lugosi’s mad monobrowed, curly haired Mirakle seeks and tortures female victims until he can get the ‘right’ mate, namely Camille (Sidney Box, bizarrely billed above Lugosi. But she was after all producer Carl Laemmle’s lover).

Murders in the Rue Morgue is pure German Expressionism with its extraordinary sets depicting a pre-Hausmann Paris and with chiarascuro cinemaphotography by Karl Freund who would go on to direct The Mummy (1932) with Karloff and Mad Love (1935) adds a great deal of atmosphere. Freund had shot such German Expressionist classics as The Golem (1920), Tartuffe and Metropolis (both 1926) (all have been released bu Eureka Entertainment) among others, Dracula and would go on to shoot such gangster classics as Key Largo (1948). This was Florey’s only horror film until The Beast with Five Fingers (1946) with Peter Lorre.

The middle of the three films is The Black Cat (1934) is the best sparring feature between Lugosi and Karloff of the eight films they appeared in together. As with the other two included in the collection, the subject matter is quite sadistic, although perhaps has less to do with Poe, beyond containing the “spirit of Poe”. Poe’s black cat story involves an uncovered murder behind a bricked up wall in which a suggested ghost of a cat reveals the corpse. There were several remakes or versions of Poe’s story in later years including a 1941 version (with little in common, other than co-starring Lugosi), more closely, a 1966 B movie, an episode in the anthology Roger Corman film, Tales of Terror (1962), Lucio Fulci’s 1981 take, while another anthology, Two Evil Eyes (1990) had Dario Argento’s direct his interpretation. In this 1934 film, a car crash leaves a doctor (Lugosi) and a young couple stranded at the Modernist house of the mysterious Hjalmar Poelzig (Karloff). It transpires that Lugosi’s Dr. Werdegast and Poelzig are old rivals with Poelzig responsible for the possible murder of the doctor’s wife and daughter. Let’s just say that Poelzig’s basement contain a chamber of horrors of a Poe level.

The third film is The Raven (1935), again re-teaming Karloff (who gets a single name credit again, as with The Black Cat) with Lugosi. Although not a direct translation of Poe’s famous poem, even though there is dance interpretation on stage, it is about a Poe superfan in surgeon Dr. Vollin (Lugosi) that takes his obsession with the writer to the point that he keeps a dungeon with swinging pendulums and other Poe torture devices. Naturally, as you’d expect from any Poe superfan, he also obsesses over an unobtainable woman (Irene Ware). Vollin is interrupted by a wanted fellon, Edmond Bateman (Karloff) who demands that the surgeon changes his face, as his ugly face makes him mean. This gives Vollin a lightbulb moment in distorting Bateman’s face to do his bidding against Judge Thatcher (Samuel S. Hinds), the object of his affection’s father who has forbidden any relationship between the two. Of course Poe would have another phase in which filmmakers took the “spirit of Poe” in at least 10 of his stories for the Roger Corman AIP films in the early 1960s, most of which starred Vincent Price. This is an indication of how effective as property Poe was and still is, more so than say other contempories as H.P. Lovecraft.

As already stated, all these films have what many have said contain the ‘spirit of Poe’ – this is undeniable. Poe does not really have monsters in his stories, but instead they contain strong dark aspects of the human psyche which each of these films made an effort to demonstrate. The bonus material on these two discs contain is also nicely done from the multiple audio commentaries to Kat Ellinger’s contextual understanding of gothic tales in both literature and cinema starting with Horace Walpole’s book, ‘The Castle of Otranto’ (1764). Among the other superb extras, Kim Newman gives a usually insightful overview of both these films, as well as a radio presentation of Lugosi narrating Poe’s ‘The Tell Tale Heart’, narrated with the Hungarian’s usual wonderful accent with the expected gravitas, Karloff doing ‘The Tell Tale Heart’ and Peter Lorre doing ‘The Black Cat’. What is evident is what superb accents or voices all these actors had, as iconic as the horror characters they created. Asides from a 48 page booklet, there is also a featurette on ‘Cats in Horror’ narrated by Lee Gambin that spends some time discussing the Pet Semetary films, but surprisingly glosses over Cat People and Corman’s Tales of Terror (1962).