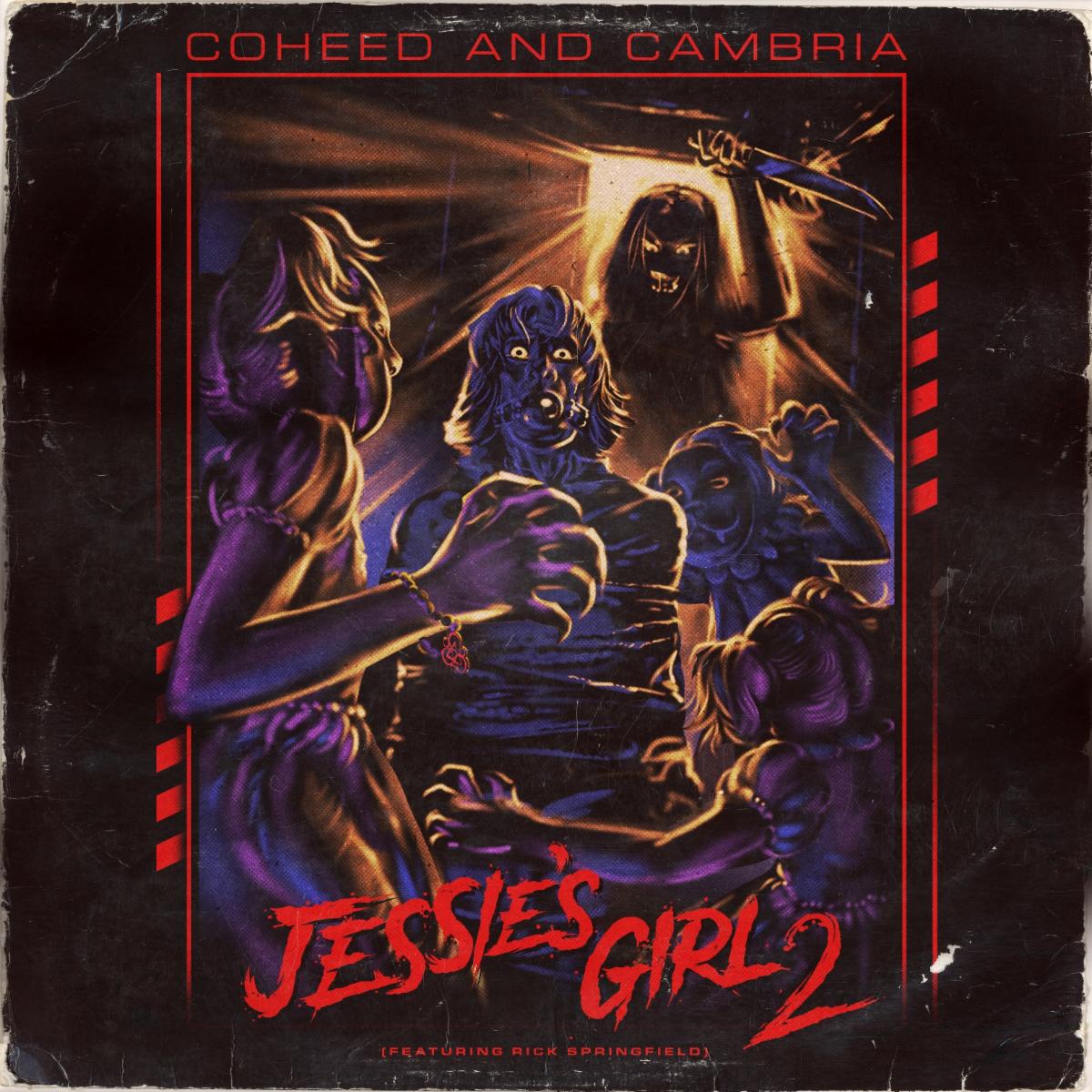 Modern rock storytellers Coheed and Cambria have teamed up with GRAMMY Award-winning singer Rick Springfield in the sequel to one of the most iconic stories in rock ‘n’ roll history with “Jessie’s Girl 2.” The track, which finds the two extending the narrative of the 1980’s smash hit “Jessie’s Girl” with some unexpected twists, is available now on all streaming platforms and is joined by an official music video (directed by Craig Bernard and Cully Bunker). Featuring both Springfield and the band, the video comically explores the unexpected and diabolical nature of Jessie’s girl, proving that things are not always as they seem.

Coheed and Cambria – Jessie’s Girl 2 (feat.Rick Springfield)
Coheed and Cambria vocalist / guitarist Claudio Sanchez wonders, “has anyone ever written a sequel to another artist’s song?” He continues, “I don’t think so. As a fan of movies, it just seemed like a really interesting idea.” The song’s concept evolves around the premise that ‘he got the girl’ and asks, ‘where are they now?’ Let’s just say it’s not a fairytale ending, as Sanchez surmises, “it’s kind of like a National Lampoon’s movie meets So I Married an Axe Murderer.”

The genesis of “Jessie’s Girl 2” dates back to Coheed and Cambria studio sessions from 2019, when the band began riffing on an idea as Sanchez extemporaneously sang the hook from Springfield’s 1981 Billboard Hot 100 #1 smash. A germ of an idea was planted as Sanchez pondered, “what if a band created a sequel for a song that wasn’t originally theirs?” After fleshing out new lyrics and tinkering with the concept (even considering a future album of likeminded material called “Sequels”), the band revisited the idea during their time spent at home quarantining during the COVID-19 pandemic, and Sanchez pitched the idea to Springfield on IG Live. As the song started coming together, they sent it off to Springfield and upon hearing it, the legendary singer agreed to pick up where he left off almost forty years ago, and feature on the song. “Jessie’s Girl 2” looks at what could have been by flipping the timeless anthem of unrequited love on its head, further broadening the legacy of this songbook essential which earned Springfield the 1982 GRAMMY® Award in the category of “Best Rock Male Vocal Performance.”

To celebrate “Jessie’s Girl 2” (Feat. Rick Springfield), Coheed and Cambria have launched a special webstore pre-order for a 7” vinyl release of the single which will arrive on September 4th. The webstore exclusive vinyl includes a Side B “Jessie’s Girl 2” (Directors Cut) version of the song and is available for pre-order alongside limited edition “Jessie’s Girl 2” merch items including: a t-shirt, trucker hat, button-set, and poster.

Furthermore, Sanchez recently made headlines when he joined forces with Danny Carey of Tool, Bill Kelliher of Mastodon, Les Claypool of Primus, and Stephen Brodsky of Mutoid Man as part of Gwarsenio Hall’s “Two Minutes to Late Night” series. Together, this all-star collective performed an at-home quarantine cover of the Rush classic “Anthem” ZOOM-style, which garnered widespread acclaim with Rolling Stone noting, “The virtuosity is intense, including Kelliher’s wild solo and Sanchez’s wailing choruses.” Proceeds from the cover benefit the Cancer Research Institute.

Coheed and Cambria have a handful of tour dates scheduled for 2021, including a gig with Blink-182 in Milwaukee, WI on July 2nd, Riot Fest in Chicago, IL on September 16th, and their very own S.S. Neverender Cruise setting sail from Miami, FL on October 26th. For tickets and more information on Coheed and Cambria’s tour dates please visit their official site.

Comprised of Claudio Sanchez (Vocals / Guitar), Travis Stever (Guitar), Josh Eppard (Drums) and Zach Cooper (Bass), COHEED AND CAMBRIA have gripped listeners and press around the globe with their visionary compositions and conceptual mastery. This past October COHEED AND CAMBRIA made a stunning return with their new album THE UNHEAVENLY CREATURES, which debuted at #1 on Billboard’s “Hard Rock Albums” chart, #6 current sales and Top 15 on the “Billboard 200” chart. Boasting 15 songs over 78 minutes, THE UNHEAVENLY CREATURES marked COHEED AND CAMBRIA’s furious return to concept albums, the ‘First Act’ in a brand-new story arc set within the backdrop of The Amory Wars universe. The acclaimed record is highlighted by standout tracks “The Gutter,” “Unheavenly Creatures,” “The Dark Sentencer” (premiered by Marvel Studios) and “Old Flames,” the latter of which features an official music video directed by Charles “Chas” Todd. The cinematic clip features striking choreography masterminded by Broadway luminary Jon Rua who is known for his roles in the 12-time Tony nominated Spongebob Squarepants and the Tony & Grammy Award Winning hit musical Hamilton. Sanchez also announced in an interview with Kerrang! that he had just inked a collaboration with Neca Toys for a line of action figures featuring characters from The Amory Wars universe.