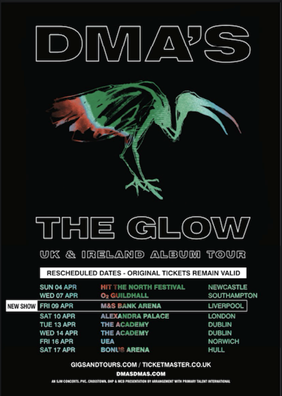 DMA’S have today announced a new Liverpool M&S Bank Arena date for 9th April 2021. They’ve also announced that they will reschedule their planned UK Headline October tour to April 2021 (full dates below). DMA’S are renowned for their euphoric live performances, having previously sold out both Manchester’s Castlefield Bowl & the O2 Brixton Academy in less than 24 hours. Now fans have the opportunity to purchase tickets for their April UK headline tour including their biggest UK Headline show to date at Alexandra Palace. Tickets will be available from Friday 28th August at 9am.

DMA’S critically acclaimed 3rd studio album ‘THE GLOW’ was released last month and charted at an impressive #4 in the official UK chart, #2 in Australia and #1 in Scotland.

DMA’S new album ‘THE GLOW’ is a mission statement that the trio immediately encapsulate within the opening two tracks. A swaggering mash-up of Screamadelica-era attitude, big beat dynamics and modern alt-pop flair, ‘Never Before’ immediately sets the tone. The title track then keeps that energy firing, a rapid-rush of melodic energy, joyous optimism and a new-found confidence in Tommy O’Dell’s vocals. As suggested by single ‘Silver’ DMA’S are expanding the scale of their sound. ‘Life Is A Game Of Changing’ adds an exhilarating rush of big beat dynamics, sun-kissed Balearic dance vibes and the guitar-meets-electro hybrid of latter day New Order. It furthers the DMA’S incorporation of digital beats and sequencers in their songwriting process. And yet DMA’S save the biggest surprise for last. ‘Cobracaine’ is a celebration of everything the band can be. It’s a maximalist melting pot of sounds: an escalating wall of guitars the foundation for a tense, almost trancelike beat with vocals filtered through harmonies and vocoders. And as it hurtles to its mesmerising conclusion, one thing is certain: this is the most fully realised of the band’s three albums to date.

‘THE GLOW’ was produced and mixed by Grammy award winning producer Stuart Price (Madonna, The Killers, New Order) in the historic Westlake Recording Studios, a long way from the band’s early days in Sydney. From their emotive heart to their towering hooks, the core traits that have earned DMA’S a huge following are still prominent in new album ‘THE GLOW’, but now their anthemic sound is infused with a euphoric flood of alt-pop flair with pulsating synths and taut beats.  While the huge choruses will prove to be electrifying highlights of future live shows.

‘THE GLOW’ isavailable to purchase in heavy weight vinyl as well as a limited edition heavyweight tri colour vinyl available through HMV and independent record stores. Exclusive merchandise bundles are available through the band’s official store.