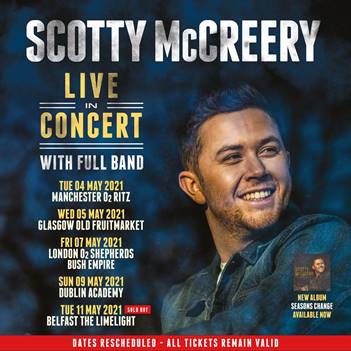 Due to the ongoing global pandemic and the government measures implemented to limit its spread, multi-platinum country star Scotty McCreery‘s highly anticipated return to the UK – and his first trip to Ireland / Northern Ireland – has been postponed again, from October to May 2021. In a statement to fans, Scotty said: “I am so disappointed that we have to postpone our UK and Ireland tour yet again, but the safety of my fans, the venue workers, and my band and crew remains my first priority. I cannot wait until May 2021 to get there! We had so much fun in England on the last trip, and I cannot wait to visit Scotland, Ireland and Northern Ireland for the first time. Until then, I send much love to all of you there and hope everyone stays safe.”

Customers are advised to keep hold of their tickets as they will be valid for the new rescheduled dates with limited tickets still available for shows in Manchester, London, Glasgow, and Dublin; (Belfast date sold out):

Tickets for the UK shows are available via Gigs and Tours; tickets for Dublin via Ticketmaster.

CMT & ACM award winner McCreery recently gained his third consecutive US #1 radio single with ‘In Between‘, following previous hits ‘Five More Minutes‘ and ‘This Is It‘, all taken from his latest album Seasons Change. At the start of the year, acoustic versions of all three singles appeared on a digital-only EP, The Soundcheck Sessions, along with a fan-favourite from the album ‘Still’.

Earlier this month, Scotty also performed an exclusive session for the Country Show with Bob Harris on BBC Radio 2, recorded from his home – listen here.