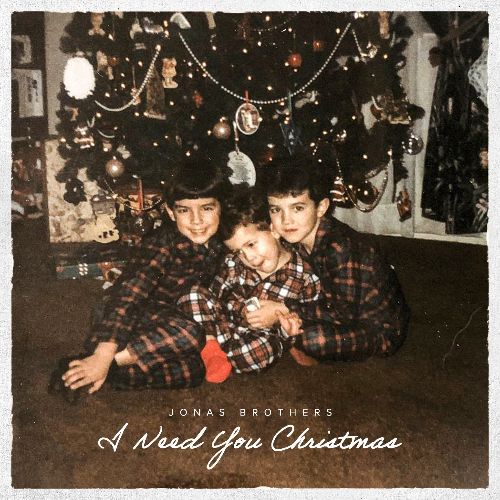 JONAS BROTHERS RELEASE VIDEO FOR “I NEED YOU CHRISTMAS”

Jonas Brothers first began their Christmas takeover with the release of last year’s upbeat original song “Like It’s Christmas,” which reached #1 Billboard’s Adult Contemporary chart, becoming a fan favourite and mainstay on Holiday playlists. Since last year, “Like It’s Christmas” has already racked up over 130 million global streams, in addition, to praise from Rolling Stone, Billboard, and Vulture who claimed, “With all this comeback success, every day feels ‘like it’s Christmas’ for the brothers.”  The band recently performed “Like It’s Christmas” for the first time on NETFLIX’s Dash & Lily, which was executive produced by Nick Jonas.

Get ready for more soon! For now, enjoy Christmas with Jonas Brothers.

Following a six-year hiatus, Jonas Brothers took the world by storm in 2019 with the surprise release of their critically acclaimed and widely successful single “Sucker.” The triple-platinum single debuted at #1 on Billboard’s Hot 100, becoming the first #1 for the band and the first #1 debut from a group this century.  The band went on to release Chasing Happiness, an Amazon Original film documenting the brothers rise and return to music, before going on to deliver their third #1 album debut with the release of their platinum-selling album Happiness Begins (Republic Records). The band continued to soar with their sold-out “Happiness Begins Tour,” with over 1.2 million tickets sold.

Continuing the journey that began with last year’s Amazon Original documentary Chasing Happiness, Happiness Continues captures the band’s live concert experience and provides an exclusive look into the Jonas Brothers’ lives on the road.  Happiness Continues is available to stream now exclusively on Amazon Prime Video, in more than 200 countries and territories worldwide.