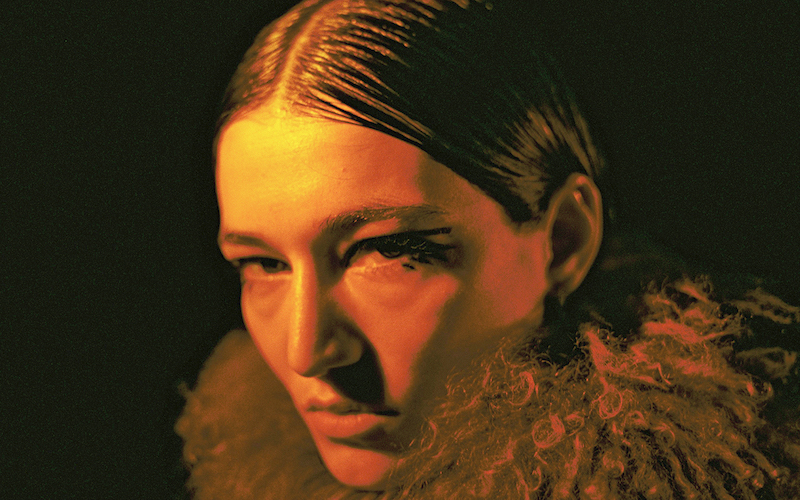 New Zealand-born, London-based singer, songwriter and producer October and The Eyes will release her debut EP, Dogs and Gods, on KRO Records this Friday, November 20th. Today, she shares “Dark Dog,” the first track that she wrote for the EP.

Speaking about the track, October said “It’s about the uneasy feeling of being watched, that at any moment something bad could happen. There’s an anecdotal malformed dog who’s always near – limping, snarling, growling and drooling. It’s one you feel equally sorry for as you do fear it. You cannot outrun this dark dog, so you decide to make peace.”

October is no new-comer to music – despite only being 23, the New Zealand born musician has been involved in musical pursuits since she was a child. Heralding from a musical family, the prospect of pursuing music in one form or another was almost inescapable: A classical pianist mother, fanatic music fan father, and two older multi-instrumentalist brothers who were always holding their band practices in the family playroom. October’s childhood was that of a humble upbringing; having grown up in a small rural town in New Zealand’s wine country, she turned to songwriting as a means to stave the boredom away. She taught herself how to record and produce her own music aged 12, locking herself away in her bedroom for hours on end, and hasn’t looked back since. Claiming the internet raised her, it’s clear she had her sights set on broader horizons and bigger cities.

Having moved half way across the world to her new home in East London, October has remained true to her traditional isolated writing style by holing up in her East London flat for several months and writing a small collection of songs that can be described as dizzying, darkly kaleidoscopic, and dauntless above all. Impressively, October produced the ‘Dogs and Gods’ EP herself, creating a sonic universe that heralds her heroes of yesteryear, whilst never losing sight of the future.

October describes her musical style as ‘collage-rock’ (not the be confused with college rock). Pulling musical inspiration from the likes of Bauhaus, Bowie, Siouxsie Sioux and Suicide, she then squeezes her influences through the gauze of modernity and electronics, thus creating something entirely of her own.

Thematically the ‘Dogs and Gods’ EP explores the complex dynamics of love, lust and infidelity in the 21st century.  Her first single “Playing God”  is laced with irony and humour – her vocals boldly proclaiming “I enjoy playing The God” with unabashed hubris, whilst later insisting “poor little old me!”.

‘Dogs and Gods‘ appears an exercise in contrasts and contradictions; the second track “All My Love” lures you into a warm embrace of October’s coy and breathy sweet-nothings, only to push you away again on “You Deserve it”, with the venomous delivery of the opening line “Do what you want, you deserve it! I’m only thinking just the same”.

Witnessing a live performance from October And The Eyes is equal parts bewildering as it is uncomfortable. October is not afraid to isolate a lucky (or unlucky) member of the audience with her penetrating stare, and simply hold them at ransom with unwavering black eyes. Cutting her teeth within the Auckland music scene of NZ, October And The Eyes’ live shows effortlessly command trance like engagement from her audience. October And The Eyes was supposed to join Yves Tumor on selected European tour dates, but due to certain pandemic circumstances, will sadly be no more.

Covid-19 may have put a hold on the live music scene for 2020, but all going well, October And The Eyes will surely be back with a roaring vengeance with come 2021 – fully fleshed five piece band and all.

With ‘Dogs and Gods‘ EP set for release Nov 20th via KRO Records, it’s hard not to be intrigued about what October might do next. Best you keep all ears and eyes on October And The Eyes.