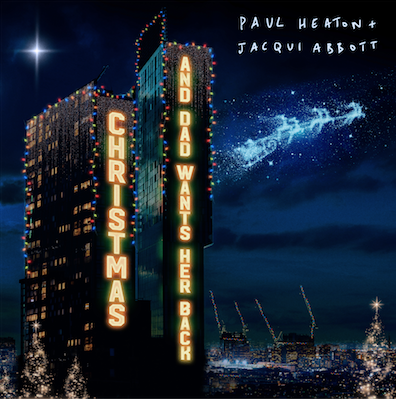 Paul Heaton & Jacqui Abbott have taken a break from the 24 hour news feed of misery and despair to record a seasonal song to put a smile on our faces.  Entitled ‘Christmas (And Dad Wants Her Back)’ it’s available today (Nov 19th) on the EMI label.  The song, written by Paul Heaton (Q’s All-Time Classic Songwriter!), is a typically wry take on a relationship in turmoil during the festive season and features a rollicking brass band section arranged and composed by Guy Barker.

Says Paul Heaton: “I wanted to write a song, outside the usual cosiness that bedecks most Christmas singles. Perhaps a song that records some of the calamities that certain single parents face on the day itself; burnt dinners, toppled trees, disappointed children, and most importantly, loneliness.”

1.  The Only Exercise I Get Is You

2.  If You Could See Your Faults

4.  Big News In A Little World

6.  The Outskirts Of The Dancefloor

Paul Heaton & Jacqui Abbott‘s fourth studio album ‘Manchester Calling’ which was released on Friday 6th March, entered the UK official album chart at No 1, Paul & Jacqui’s first No 1 album as a duo. As members of the Beautiful South they reached the No 1 slot in the albums chart three times with Carry On Up The Charts: The Best Of (’94), Blue Is The Colour (’96), and Quench (’98).

Paul Heaton is one of the UK’s most consistently successful songwriters. His total sales across his catalogue (The Housemartins, The Beautiful South, Solo, and Paul Heaton & Jacqui Abbott) is 8.7 million in the UK, and 12 million globally.  Paul Heaton & Jacqui Abbott‘s previously announced tour of the UK and Ireland, including three free shows for NHS and care workers, has been rescheduled to 2021.  As with the previous live shows, Paul & Jacqui have requested that the ticket price for the tour remains at £30. A full list of all tour dates is below.

Remaining tickets for the tour are available from www.gigsandtours.com