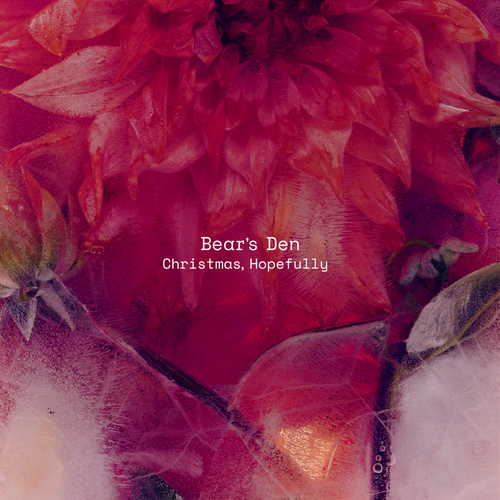 Following on from the release of their critically-acclaimed record ‘Fragments’ in September, a collaborative release with noted producer and composer Paul Frith, Bear’s Den have now capped off their 2020 with the release of a brand new EP ‘Christmas, Hopefully’.

Featuring the previously shared title-track, alongside the newly unveiled single ‘Favourite Patient’, ‘Christmas, Hopefully’ becomes the third in a series of festive and winter releases by the band, which kicked off in 2016 with the stand alone single ‘Berlin’ and was followed by last year’s ‘Only Son of The Falling Snow’ EP.

This new offering features three new songs from the group; The title-track focuses on spending Christmas apart from loved ones, whilst the single ‘Favourite Patient’ is about Andrew Davie’s fiancé, a doctor who has been dramatically affected by the events of this year, and finally ‘Berlin Pt II’, a direct sequel to their 2019 Christmas song, which has now been streamed more than 20 million times.

Speaking about the new track ‘Favourite Patient’, the band said, “I wrote this song about my fiancée, she’s a junior doctor. The last couple of years of her training has involved working everywhere from A & E to Psychiatry Wards. I wrote this song one night after she told me that her favourite patient she’d been looking after for a while had passed away while at work that day. How it affected her, really got me thinking about the emotional and mental toll that doctors, nurses and healthcare professionals all go through every day, how crucially important they are and how this year has highlighted how much we all rely on them. Given that the NHS is criminally underfunded by this Conservative Government – we as a band wanted to show our solidarity, gratitude and support especially with the cases rising going into the Winter months. All proceeds from pre-orders of the E.P will be going to the fantastic NHS Charities Together who are helping to support NHS staff and volunteers during the Covid-19 Crisis.”

A limited run of 500 EP bundles will be made available globally exclusively on bearsdenmusic.co.uk as of 6pm GMT today, December 1st, with profits going to NHS Charities Together – https://www.nhscharitiestogether.co.uk/what-we-do/
Each exclusive bundle will come with a CD copy of the EP stamped with a potato print, hand-carved by Bear’s Den, a hoodie – designed by Studio Juice, and a special, limited edition scarf made in collaboration with UK fashion brand Gresham Blake. This special edition set will cost £60 and orders will be shipped from the 4th Dec. Bear’s Den hopes to raise over £10,000 for the charity, through this special edition bundle.

Since the release of their breakthrough debut album ‘Islands’ in 2014, Bear’s Den have quickly grown to become one of the UKs most loved outfits. With their follow-up LPs ‘Red Earth & Pouring Rain’ and ‘So that you might hear me’ both landing in the UK Top 20 album charts upon their release, the band’s profile has grown from strength to strength in the last few years.
The band’s most recent album ‘Fragments’ was recorded in collaboration with composer/arranger Paul Frith, the mind behind arrangements for music giants including The xx and Radiohead, and has seen them grow to more than 425 million streams online and 500K album sales equivalents since they first began.

Following on from the release of their third album ‘So that you might hear me’ last year, the band conducted huge sell out tours of the UK, North America and arena shows in Europe, as well as a jam-packed summer festival season, an intimate ‘Highlands and Islands’ tour of the Scottish Highlands, and a run of shows supporting Neil Young in Germany bringing their total headline tour ticket sales tally to nearly quarter of a million worldwide. They also released a two-series podcast delving into ‘So that you might hear me’ and rounded off the year with a Christmas EP with lead track ‘Only Son Of The Fallen Snow’.