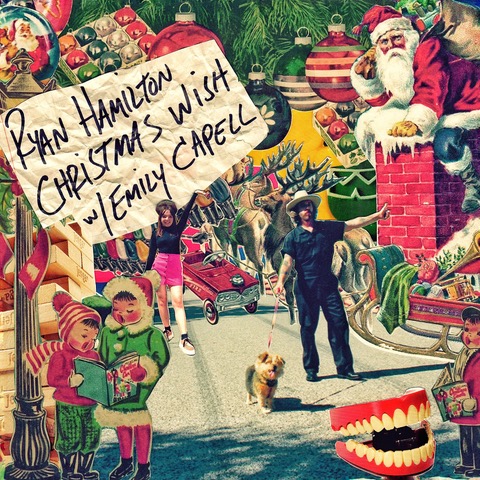 “Christmas Wish” is a fictional story of a separated couple yearning to repair their relationship over the holiday season.  As fragile as a snowflake, but with a warming message of peace, goodwill and love at its core, it’s a song that will inevitably melt the hearts of the many who are contemplating a Christmas apart from loved ones this year.

Speaking of the concept behind the song, Hamilton says:
“Writing an original Christmas song is not easy. I guess it’s why most artists just cover older ones! Haha. But, like some sort of unexpected Christmas magic, this idea appeared. A guy, alone at Christmas, with a gift under the tree for his lost love. That part comes from a very personal place. But, I took it upon myself to rewrite the story, and give it a beautiful, heartwarming ending. I mean, it’s Christmas after-all!”

Soothing guest vocals on the new single come from U.K. artist, Emily Capell, herself recently celebrating the one year anniversary of her debut album ‘Combat Frock’. Longtime fans of each other’s music, Ryan & Emily previously collaborated on a cover of Wham!’s ‘Wake Me Up Before You Go Go‘, recorded in lockdown between Texas & the U.K. While we might have to wait a little longer for a version of “Last Christmas”, a festive tune between the two was surely written in the stars from then on. As Hamilton says of the collaboration:

“Emily and I have been talking about doing something together for a while. We struck up a friendship earlier this year. I fell in love with her voice the first time I heard it. She’s the perfect addition to this song, and story.”

And on tackling the obstacles of the recording “Christmas Wish” thousands of miles apart, Capell adds: “Recording from home has not been without its challenges but you just have to get on with it! Ryan has been great and super supportive and patient with me and my terrible knowledge of technology! I can’t wait for everyone to hear the track. Also let’s hope we continue making great songs together!”

Suitably mirroring Christmas as both a time for reflection, but also one for fun, the single sees the delicate “Christmas Wish” backed by a rollicking version of the Loretta Lynn cracker: “To Heck With Ole Santa Claus” on the B-side. “This is one of my all time favorite Country Christmas songs. So much fun.” says Hamilton.

Set for release on 27th November via Stevie Van Zandt’s Wicked Cool label, “Christmas Wish” swiftly follows the release of Hamilton’s acclaimed album: ‘Nowhere to Go but Everywhere’, which broke the Top 10 in both the Record Store and the Indie Album Breakers charts earlier in 2020. “Christmas Wish” will be available on all digital platforms and as a physical CD single. Purchase / Pre Save the record here: https://orcd.co/christmaswish

While a vaccine is surely top of everyone’s wish list this Christmas, Ryan Hamilton & Emily Capell hope this little gift from them to the world can at least pass a little of the time while we wait for it. As Hamiton says:
“This year has been so awful, on so many levels. I can’t wait to see the other side of it. A big reason I wanted to do a Christmas song this year, is because I hoped it would bring some joy during a difficult time.”