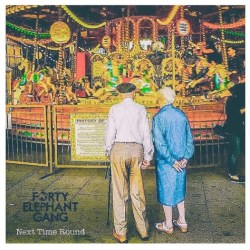 Forty Elephant Gang – Next Time Round

London’s Forty Elephant Gang are already building a fine reputation for themselves. Their melodic mixture of folk and blues features some lovely instrumental work based mainly around acoustic guitar and mandolin, with strong vocals presenting their emotional and poetic songs. Next Time Round is a fine first release and shows real promise from a band that is easy to listen to.

Forty Elephant Gang takes its unusual name from a notorious gang of female pickpockets who operated from the Elephant & Castle area of London. Although the bands sound is varied and expansive, there are only three core members: Andrew White (lead vocal and guitar) Sean Mannion (mandolin and backing vocals) and James Bachmann (guitar and backing vocals).

The album opens with debut single Songs Of Praise, a search for redemption that sees someone at a low point seeking a way forward. It is dark, yet there is a strong sense of hope for the future. Jealousy is another highlight, with an opening burst of guitar that gives way to an intricate melody in a song that never quite settles. The gentle love songs Strange Times and the quite beautiful Sweet Marie are more straightforward in their emotions.

Young Man’s Game has closer to a traditional folk feel than most, with just a touch of the sixties in its harmony vocals, and has a Mersey rather than a London sound. Light On Water is slow and atmospheric, a cello adding depth to the sound. Hollow Man Blues starts slowly and builds to a joyful conclusion.

Drunken Promise Song offers exactly what its name implies. We’ve all been there, right? I’ll do better, sort things out, be the man you want. The strongest vocal performance on the album gives the track a contradictory feel: the guarantees offered up sound sincere but there is doubt there too. It’s a very clever piece of songwriting.

Next Time Round is a good collection of songs that announces a new name on the recording scene. The band’s ability to craft songs that have a traditional feel yet also sound contemporary is a neat trick. Combining emotional lyrics with radio friendly melodies is also a good recipe for success.