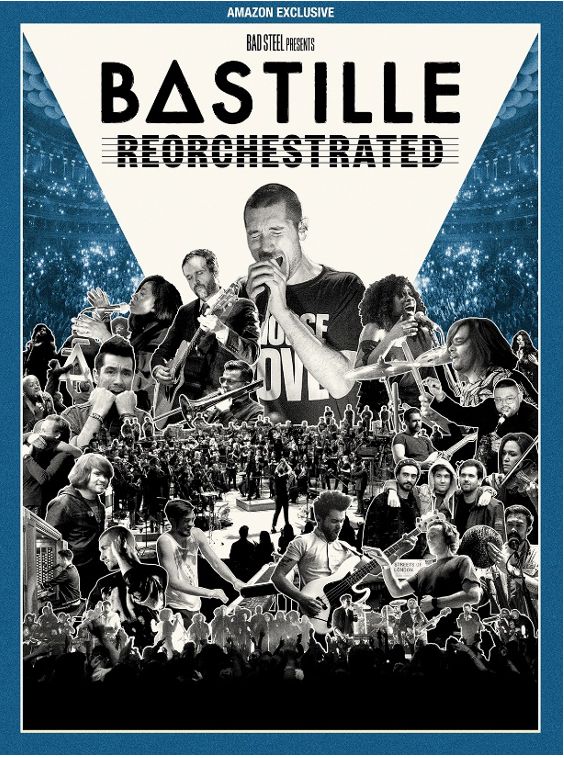 From humble underdog origins, through to a number one debut album, BRITs and Grammy nods, and huge crowds in arenas and festivals all over the world, Bastille’s story pivoted with a career-shifting show at London’s Union Chapel during 2017.

In an intimate appearance for charity, rather than simply presenting the band as it was then, Dan Smith, Kyle Simmons, Will Farquarson and Woody enlisted a choir and strings and brass ensemble, rearranging and reinventing their entire set-list for the occasion.

Unknowingly at the time, what was to spring from that performance was to flip the band’s perspective forever—igniting an insatiable desire to collaborate with an ever-evolving cast of world-class, classically trained musicians across a series of increasingly high profile appearances in globally revered venues.

Exploring themes of drive, motivation, anxiety, and imposter syndrome, ReOrchestrated is a revelatory and inspiring watch for anyone that wishes to understand what it takes to keep things gripping within the construct of a band format, and the risk-taking required to surprise and enchant both the members involved as well as an audience alike.

Sourced from hundreds of hours of unseen archive and all-new conversations recently captured during the pandemic, the film features bracingly honest insights from all four band members plus characters inextricably linked to the group’s time thus far. It charts the very beginning of the band’s foundations all the way through their three albums to date, via landmark, full orchestra appearances at Royal Albert Hall in London, Elbphilharmonie in Hamburg, and The London Palladium, not to mention the inevitable tensions encountered en route.

The film is co-directed by long-time band collaborator Tom Middleton and Toby L (Foals – Rip Up The Road), an Up The Game film produced in association with Crooked Cynics, EMI and Amazon Music.

Fans can also listen to Bastille’s Amazon Original, orchestral version of their song “Million Pieces” with The Chamber Orchestra of London, which was recorded at the prestigious Abbey Road studios for Amazon Music. Listen HERE.