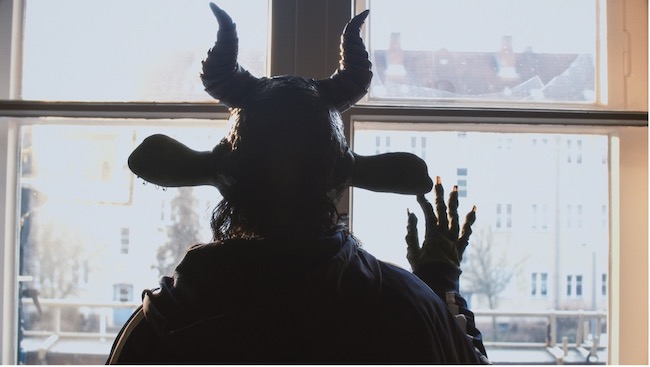 Just in time for Valentine’s Day, composer, singer and songwriter Danny Elfman is sharing his new song ‘Love In The Time Of Covid’. The short film accompanying the track is directed by German filmmaker and photographer Sven Gutjahr and Elfman’s creative director Berit Gilma. It tells a somewhat bizarre story of longing for intimacy in today’s socially isolated world in a very unique way.

Filmed in Berlin, the video’s main character is played by Scottish transgender performer Shrek 666 who wears extensive makeup and prosthetics. The non-human form echoes the universal surrealism of life during lockdown. Elfman also appears in a few surprise cameos in the video.

“There’s certainly nothing light-hearted or funny about Covid, but I can still poke a little fun at the crazy way social isolation has changed our lives in every way shape and form, and that’s what “Love In The Time of Covid” is about,” Elfman explains. “An expression of the borderline madness that so many of us have been experiencing. Lord knows I have. I wrote it from the viewpoint of a young man going crazy in his apartment. Creators Gutjahr and Gilma had the idea to turn the lead character into a green-skinned animal-like creature. As many us feel completely alienated in this insane new world we live in, and I thought it was an interesting idea”.

‘Love In The Time Of Covid’ features vocals, guitars and synths by Elfman, drums by Josh Freese, guitars by Nili Brosh, bass by Stu Brooks, percussion by Sidney Hopson and strings by the Lyris Quartet. It was executive produced by Laura Engel and the project producer was Melisa McGregor.

Throughout this year Elfman will continue to release songs on the eleventh day of the month. The number 11 has always had significance to Elfman, with his name Elf meaning “eleven” in German. Last month Elfman released “Sorry”. “The anger-fueled track pulls from industrial and prog-rock influences to create an uneasy atmosphere that’s made even more unnerving with a jarring video animated by Jesse Kanda,” said SPIN. Kanda (Arca, FKA Twigs, Bjork) originally created the video’s intricate animation as a visual backdrop for Elfman’s live performance of the song for the now postponed Coachella 2020. Watch it HERE.