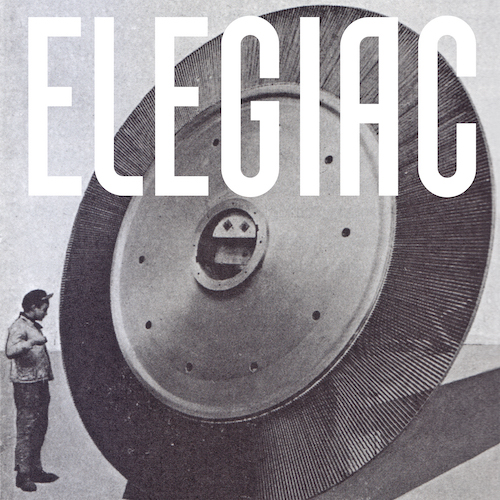 ELEGIAC is the collaborative project of Edvard Graham Lewis (Wire, He Said) and poet Ted Milton (Blurt). The pair have joined forces, alongside sound artist Sam Brittion, who mixed the record for their debut self-titled album, which is due out March 26th via Upp Records. Today they are sharing the first single from the record “Vous Et Ici” online.

Ted Milton is a prolific poet, with several volumes under his belt, as well as an avant-garde puppeteer. Yet he’s probably best known as vocalist/saxophonist with psycho-funk afro punk fake no-wave pogo jazz trio Blurt. Milton’s group has produced an impressive string of albums, not to mention his numerous solo recordings.

Meanwhile, Edvard Graham Lewis has a history of strong solo releases, both under his own name and as He Said. And of course, as bassist, lyricist and sometime vocalist with post punk innovators Wire, he’s been responsible for numerous landmark releases, from 1977’s Pink Flag, to 2003’s Send, to 2020’s Mind Hive.

There’s a definite sense that Milton and Lewis were born to collaborate. Both are idiosyncratic sonic stylists: bullish outsiders with a Dadaist’s ear for unexpected rhythms and ear-catching turns of phrase. Now, ‘ELEGIAC‘ sees them melding their considerable talents to produce an album of arresting intensity.

What started out as a one off joint composition, proved to be such a fruitful exercise it soon developed into a stream of new work.  Album opener ‘Vous Et Ici’ is a twisted tale of unrequited love, set atop skittering rhythms and curlicues of bass, whilst, ‘Vancouver Slim‘ is a dialogue between nervously looping electronics and a mournfully wayward sax solo.  Meanwhile ‘So Far’ comes across like Michael Nyman trapped in some strange break-beat bordello, as Milton recites information regarding the ‘planking’ of a boat. It’s a bizarre yet perfect fit.

The album has been arranged and mixed by electronic composer and sound artist Sam Britton. Britton’s sure touch ensures that the various elements work together to create something quite unique. For whilst ‘ELEGIAC‘ is a collection that foregrounds its off-centre and experimental aspects, it’s also blessed with plenty of hooks and seductive grooves. This is exemplified by ‘Swish‘, which, with its shuffling drums and reverberating guitar traces, sounds like a sublime out-take from Can’s ‘Tago Mago’.

Bristling with ideas and exploratory sounds ‘ELEGIAC‘ bounds into 2021 with a supreme confidence. It’s unlikely you’ll have heard anything quite like this before…