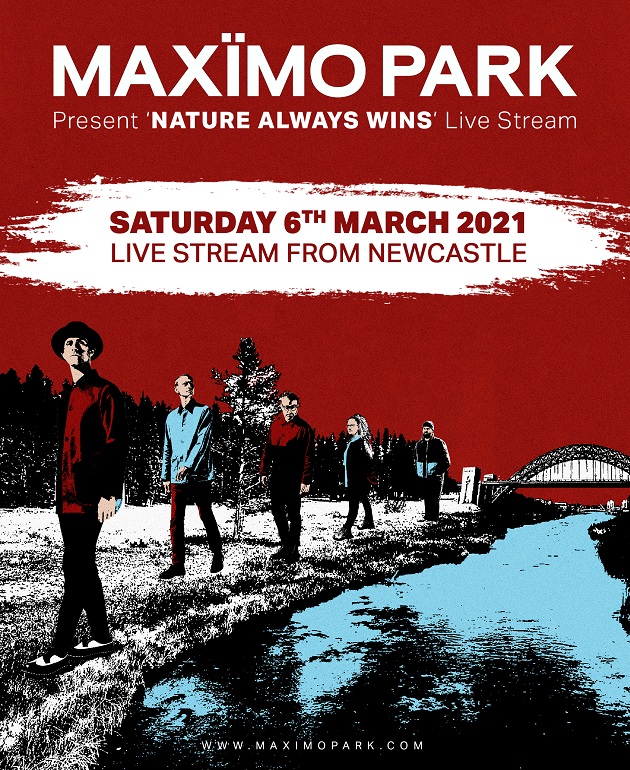 As the release of Maxïmo Park’s highly-anticipated new album “Nature Always Wins” draws ever closer, today they are confirming news of an exclusive online live-streamed show. The performance will celebrate the release of the album, and take place on Saturday March 6th, live from the Riverside, Newcastle. The band will play songs from the new album live for the very first time, as well as a selection of their biggest hits.

Fans can get access to the live stream buy purchasing an album bundle with ticket HERE.

“Since we can’t play live in front of a crowd at the moment, we’ve decided to give a live, streamed broadcast from an (almost) empty Riverside venue in Newcastle. We’re excited to be introducing some songs from our new album, ‘Nature Always Wins’, as well as blasting through some old favourites. Join us at 8.30pm GMT on Saturday March 6th…”

The band also play a run of album launch shows which will kick off in April, in conjunction with some of the country’s best-loved record stores. Tickets are on sale now HERE. Full dates below.

Headline UK tour dates are as follows, and on sale HERE.

The news comes as the band are sharing new single All Of Me, which this week jumps straight onto the BBC 6 Music playlist. It is a song that comes to exemplify the approach that Grammy-winning producer Ben Allen (Animal Collective, Deer Hunter) instilled into the recording process. Making use of the quiet and the space, it unfolds into an expansive offering to match their most widescreen outings. Lead singer Paul Smith details the song:

“It’s a love song about the power of song itself, buoyed by the uplifting music in the chorus. It’s also about domesticity and family life being valid subject matter for a pop song. The more intimate verses are bits of advice to someone who has changed your perspective on life. Big themes!”

Of the accompanying video he continues: “Both the quiet verses and the anthemic choruses are reflected (pun intended) in the video, which was influenced by an intimate film of Arthur Russell playing cello, as well as Bruce Lee flighting within a hall of mirrors in Enter The Dragon!”