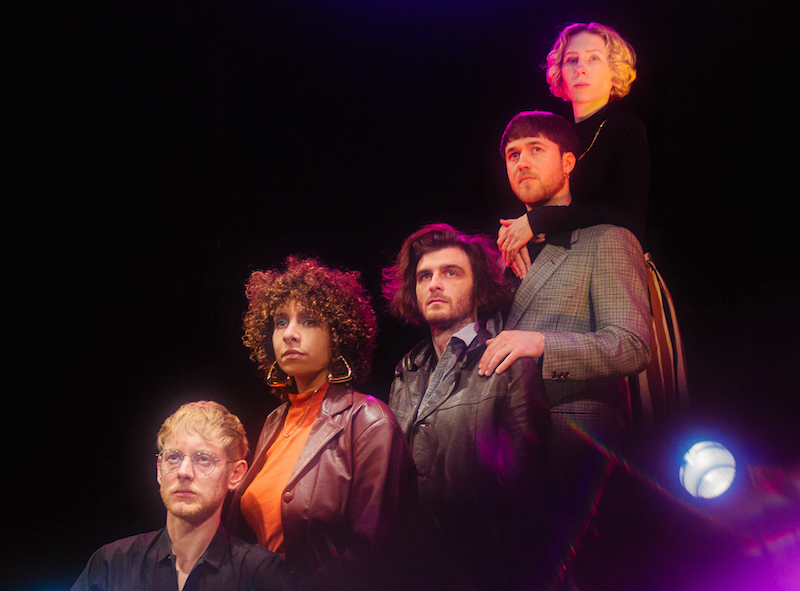 Berlin-based indie-soul five-piece, People Club, announce their new EP ‘Take Me Home’, which is due May 7th and today the band are sharing the title-track & new video.

The title track “Take Me Home” is a song about the realisation of mortality in old age and the cynicism that often plights the elderly after losing their loved ones and being left alone with their regrets.

It is accompanied by a music video shot by long standing collaborator, Felix Spitta. Speaking of the process the band say, “Once again we worked with our very talented friend, Felix Spitta, who also shot the video for our last single Francine.  We basically spent a day fooling around at his house with a smoke machine and an old tape TV camera with a red filter.  The result is hazy and disorientating, just like this year has been so far.”

The Take Me Home EP was written over the course of 2019, almost exclusively in their studio in East Berlin.  The songs tackle various themes – addiction, death, lovelessness. According to the band, “What the songs have in common is a distillation of 21st century malaise, and all the psychic entanglements that comfort and haunt us everyday”.

The songs were recorded at Bewake studios in Kreuzberg, Berlin in November 2019 with Martin ‘Lucky’ Waschkowitsch and mixed by Joe Harling. “We had these tracks earmarked for release in 2020, but unfortunately we were held back from our plans by the pandemic, along with so many other artists.  It’s deeply cathartic for us to finally be able to release these songs”.

Forming in Berlin in the sticky summer of 2018, the band met online over the seedy pages of craigslist. Guitarist Saxon Gable had placed an ad amongst the foot fetishists, looking for like-minded individuals to start a serious musical project. Uniquely, none of the five (soon to be band members) were German, they were all immigrants who had either just moved to the city, or were in the process of doing so when they responded to the ad.

Saxon and bassist Ray Sonder had just left their lives in Sydney, Australia to return to Berlin where they had spent a summer previously. Shortly afterwards, they met keyboardist Pete Costello, a no-nonsense northerner from Leeds, leaving his life as a club promoter behind him in London. In the following months, they were joined by drummer Drew Deal, a Kiwi from the North Island who was producing records in Capgun studios there and finally, singer Sarah Martin from Boston, Massachusetts who was getting frustrated with her life in NYC. Sarah felt forced out of the USA, becoming increasingly disillusioned and frustrated by her country and its politics.

It soon became clear that all five members shared a common vision and a desire for their music to say something. Built on a love of the traditions and recording techniques of the great American records of the 1970s and the artistry of Marvin Gaye, and Gil Scott Heron in particular, the band started to write songs with a message.

The band spent their first year locked in their studio, writing and discarding over 40 songs before emerging with their first release, the split 12″ ‘Lonesome/Better’. Met immediately with positive acclaim, the tracks were played extensively on BBC radio 1, with Lonesome picked by Jack Saunders as one of his coveted “Next Wave” tracks.

After impressive sell out first headline shows in London and Berlin, the band started to attract industry attention. Signing with ie:music, legendary London based management company and Sarah Besnard at ATC- Live, renowned for breaking Fontaines DC, the band were poised for a huge year in 2020. Confirmed shows at The Great Escape, Electric Picnic and many more were all wiped out by COVID-19. Not to be deterred, the band capitalised on the lockdown, using the lack of gigs to focus on writing.

Take Me Home is due for release on May 7th, distributed through Kartel Music Group, the record will be available through all good stores or through the band’s website.