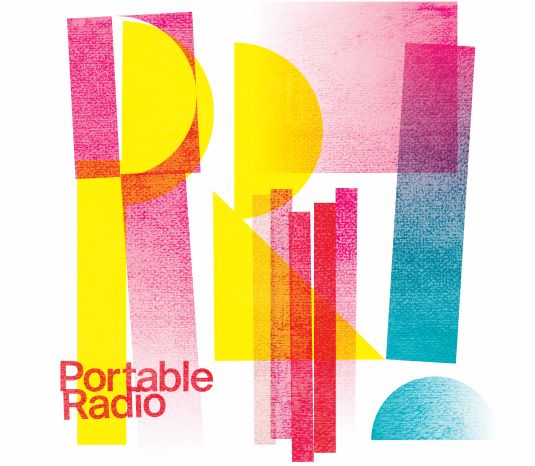 The self titled debut album from Manchester trio Portable Radio is best described as bright and cheerful. It’s exactly what we all need right now: a collection of uplifting music to raise our moods. Portable Radio is generally filed under power pop, and the eleven tracks here provide a good introduction to a band with the ability to craft short and melodic songs that have a distinctly vintage feel.

The trio – Phil Anderson, Mof Gimmers & Robyn Gibson – open the album with lead single Hot Toddy, the subject being musician Todd Rundgren. Right away the band’s musical approach is clear, with the piano leading in a track full of hooks and big vocal harmonies. The slightly slower Darling Hold On is very good, with a more strident sound and the vocals slightly less distinct. Worst Case Scenario is one of several tracks that use clever wordplay. This one has a very sixties sound, like much of the album, with some nice guitar work on display.

Rise Above is very positive, both lyrically and in tone, with the introduction of what sounds like a trombone underscoring its message. The short And I clocks in at less than two minutes long, but stands out, with two complementary synth parts giving real depth to the sound. Colour Me Impressed (not the Replacements track but an original) is also well crafted. Everything Feels Fine leads with a synth riff that evokes 80s power ballads before more of those lovely harmony vocals take the track in a very different musical direction.

This is an accomplished debut album of radio friendly tracks that offers a summer sound in dark times. Even with its vintage feel of lush Beatles hooks and vibrant Beach Boys harmonies, the music still sounds fresh rather than derivative. Portable Radio have a distinctive and unusual sound that’s well worth a listen.