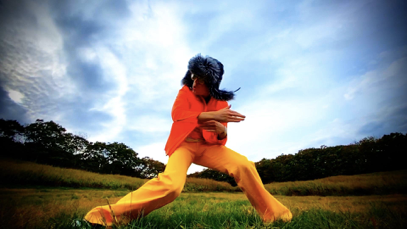 The single follows the enigmatic teaser track, “The City” released last month, but unlike its shadowy counterpart, opens-up a world quite the opposite…

Painted with a palette of technicolor sounds; from the jetstream sonics that usher the track into earshot, to the breezy calypso piano loop and acid-trippin’ guitar breaks that inflate its uncontainable sense of optimism, “Havin’ Fun With Pharaoh” drops like a pure holiday for the head.

While searching for lyrics to pair with an early instrumental of the track, Ade unearthed a series of old voice memos. Like a time capsule, the recordings unlocked memories of a life-affirming chapter in his life. Esoteric lines like “s**t – totally forgot what we had in the fridge and it was hilarious” to “like a dream of the first time hearing music” capture the ridiculousness and profoundness of time well-spent with friends in vivid, intimate detail; and illuminated by a psychedelic patchwork of drum breaks, synths, reversed guitar, and pedal steel. A dedication to an unforgettable era and the people who made it, “Havin’ Fun With Pharaoh” also offers wistful reflection on impermanence of youth and the inevitability of change as the real world beckons.

Opening up about the making of “Havin’ Fun With Pharaoh”, Ade says:
“Havin’ Fun with Pharaoh was an instrumental track that had been kicking around for a while. When it finally came time to figure out what I might want to say over it, I was going through my voice notes in search of some inspo (as one does) and ended up all the way back at the original recording of myself sitting at the piano and playing the main riff for the first time some years ago, featuring some of my friends’ voices in the background. One thing led to another and I found myself listening to a year of my and my friends’ voices, wrapped in this iQuilt patched with vibrant, goofy voice note memories. I found it only fitting to make the song a tribute to the time that that piano part was conceived, the voices in those little recordings, and the friends they belong to.”

Hopping through genres and ideas with a Beck-like boldness, “Havin’ Fun With Pharaoh” sets the scene for a debut album that dares to dream big and determined to shatter the mould: ‘Midnight Pizza‘ (released 23 April, via Trickwork).