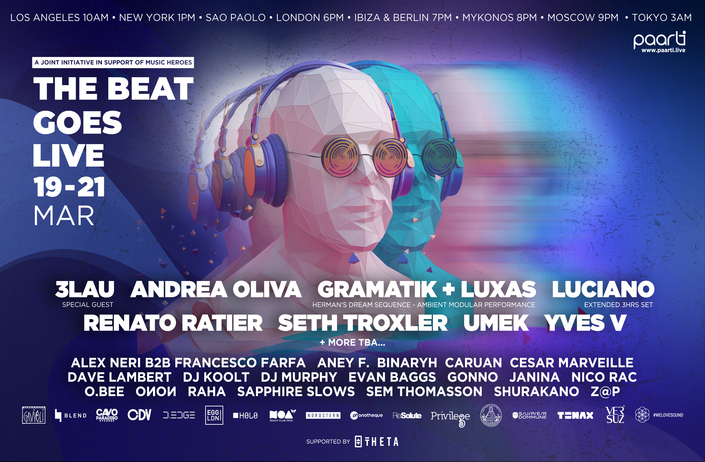 DJ, Producer, and crypto enthusiast 3LAU –– who recently broke international sales records with an $11.6M NFT album drop last week, and Gramatik —  who recently broke the record again for a solo musician NFT drop bringing in just under $1.5 million in sales in five minutes —  are taking to the crypto-digital airwaves once more, this time with revolutionary livestreaming music start-up Paarti to unite top electronic venues and musicians around the world for a weekend-long benefit in support of the international live music community.

The event’s final act from Gramatik and Luxas will be tokenized and split into an exclusive collection of six NFTs. Three of the NFTs will be awarded to the highest donors and one will be auctioned on OpenSea during the event. Having teamed up in the past synthesizing futuristic landscapes in Cyberpunk 2020 OST, Gramatik and Luxas join forces once again for an exclusive ambient modular show for THE BEAT GOES LIVE, inspired by the Slovenian rocket engineer and pioneer of astronautics, Herman Potočnik and featuring 3D visuals by Darkpxl.
Joining the event is Privilege Ibiza, “the world’s largest nightclub” per the Guinness Book of World Records, along with 13 top music venues and over 30 artists around the world, including industry mainstays Cavo Paradiso, Noa Beach Club, Nordstern, Versuz, Tenax, D-Edge, Club Der Visionare and more.

The event, titled THE BEAT GOES LIVE will stream 19-21 March 2021 exclusively on Paarti.live, a new kind of streaming and social platform launched this month promising fans, artists, and industry insiders new ways to connect, support, and engage with the live music events they love.

THE BEAT GOES LIVE, featuring electronic music artists across continents and genres is the first time so many international clubs have come together to support the music industry in a united front. It is also the first time many of these venues will be joining the exploding NFT community, with ticket sales and live donations available on both fiat and crypto, and Paarti awarding exclusive NFT’s to the event’s biggest donors as the virtual house lights come up.

Raluca Cherciu, CEO, Paarti says:
With the world’s most inclusive, engaged audience we are committed to give music lovers, artists, and industry players a more meaningful, more magical way to celebrate live music and the human connections it empowers. Because at Paarti, live isn’t just an in-the-moment experience — it’s the unforgettable connections that last long after the house lights come up.”

To learn more about Paarti, its next-generation livestreaming and social platform and its ongoing mission to connect people through the power and joy of music, visit Paarti.live.

For a full list of participating venues and featured artists for THE BEAT GOES LIVE, see the event flyer or watch Paarti’s event teaser here.