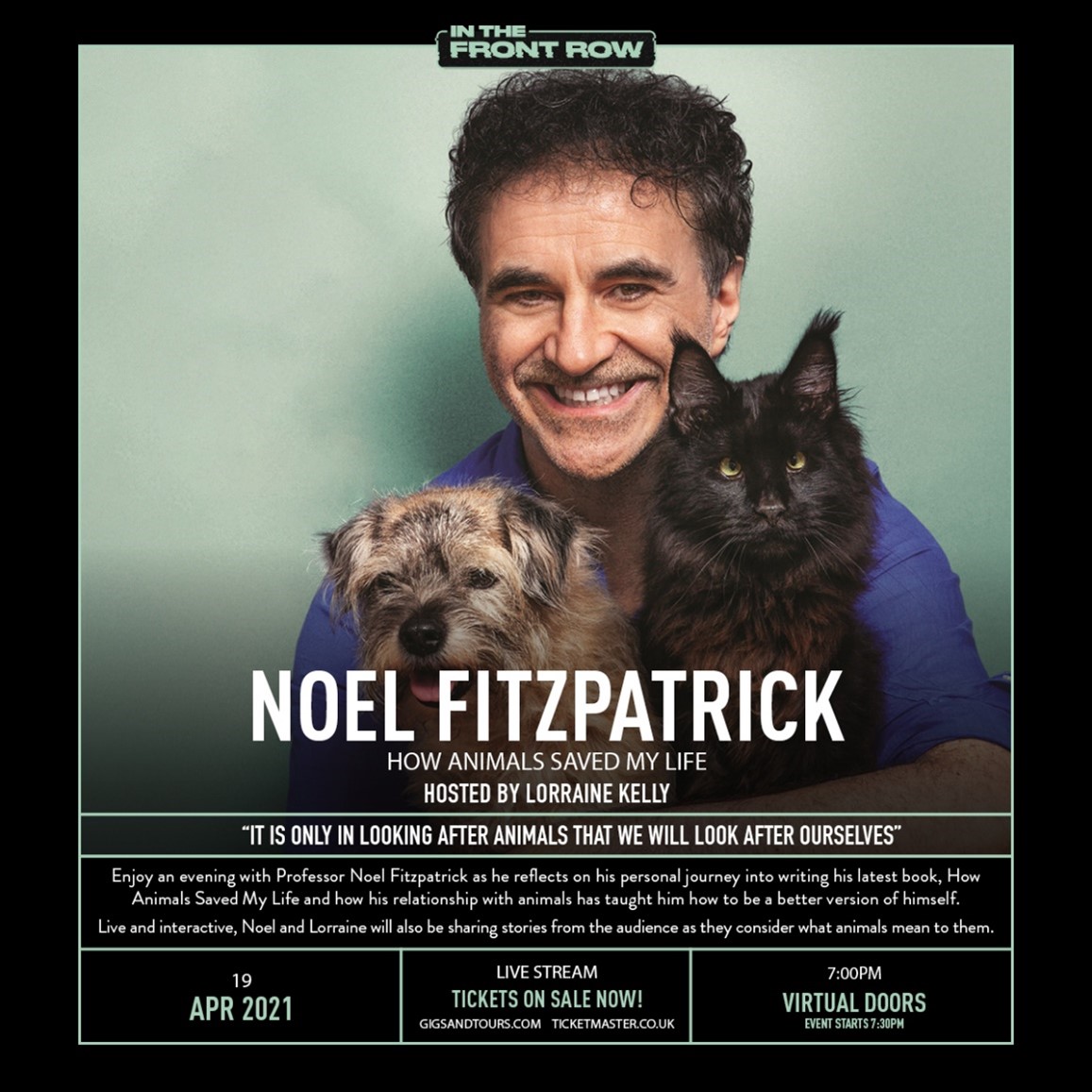 Professor Noel Fitzpatrick has today announced a live virtual evening for Monday 19th April where he will reflect on his personal journey into writing his latest book, ‘How Animals Saved My Life’ and how his relationship with animals has taught him how to be a better version of himself. In this exclusive and honest discussion, he will be joined by host and one of Britain’s most popular television presenters Lorraine Kelly.

Tickets are on sale now and available from www.gigsandtours.com / www.ticketmaster.co.uk

Professor Noel Fitzpatrick is a world-leading veterinary surgeon, TV personality and public speaker, widely known as the Supervet. Originally from Ireland, Noel is managing director of one of the largest veterinary referral centres in the UK, Fitzpatrick Referrals. Globally recognised for his innovative surgical solutions for animals, Noel has developed dozens of new techniques, including several world firsts, which have provided hope where none seemed possible to provide quality of life for his patients.

Noel has been the subject of a number of TV documentaries, currently on screen in Channel 4’s flagship factual show, THE SUPERVET’, which has one of the highest audience appreciation figures of any show on the channel. Noel has also been the focus of BIONIC VET (BBC), a guest on Channel 4’s coverage of CRUFTS, a presenter on ANIMAL RESCUE LIVE (Channel 4) and the host of his own podcast, ANIMAL PEOPLE.

In 2018, Noel embarked on a nationwide arena tour, the first veterinary surgeon to do so. NOEL FITZPATRICK, THE SUPERVET: WELCOME TO MY WORLD covered 22 dates across the UK, sharing insights into his personal journey. 2018 also saw the publication of Noel’s first memoir LISTENING TO THE ANIMALS, which quickly became a Sunday Times No.1 Best Seller.

In the public speaking world, Noel has delivered more than 700 academic lectures and talks around the globe for more than a decade, including being a keynote speaker at both human and veterinary congresses.  He founded a charity, called Humanimal Trust, which promotes the concept of One Medicine, a platform for the cross-pollination of expertise and ideas between veterinary and human medicine.

Speaking about the new virtual talk, Noel said: “Writing this book was an emotional roller coaster for me. In equal measure enlightening and deeply affecting – it was often challenging, but ultimately uplifting – much like my life as a surgeon every day. I’ve learnt lots of lessons along the way and I think many of us share similar fears, hopes, elations, frustrations, successes and failures in life no matter what path we’re on.  Animals constantly show us how to care with integrity in a world needing compassion and understanding – now more than ever. I am looking forward to sharing the journey of how all of this came to life with Lorraine and with each and every one of you”

Joining Noel will be Lorraine Kelly CBE. Lorraine is a Scottish television presenter, journalist and author, best known for her hugely successful ITV show, Lorraine. Lorraine has also hosted and appeared on many other TV programmes including The Last Leg, RuPaul’s Drag Race UK, The STV Children’s Appeal, Wedding Day Winners, Penguin A&E with Lorraine Kelly, Have I Got News For You and The Paul O’Grady Show. She has also appeared as a guest on shows as diverse as Question Time and Never Mind the Buzzcocks.  Lorraine recently returned to Dunblane for a special documentary for ITV, 25 years on from the tragic incident, which is available to watch on the ITV Hub.

In 2006 she won the RTS Award for best presenter and in 2008 was awarded a “people’s choice” Scottish BAFTA. In addition to her television work, Lorraine continues to write weekly columns for The Sun and Hello!. This year Lorraine celebrates her 35th year in television.

This brand new exclusive virtual show will be a unique opportunity to share your experiences and put your question to Noel on topics close to his heart and hear first-hand how animals saved him, literally.