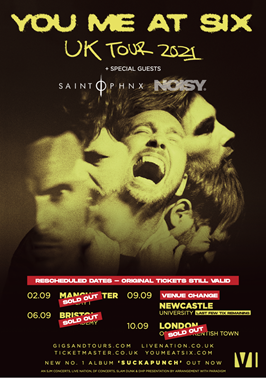 YOU ME AT SIX ANNOUNCE RESCHEDULED DATES

You Me At Six have rescheduled their headline UK tour dates to September 2021. The dates include intimate shows in Manchester, Bristol, Newcastle and London. Tickets are still valid with very few remaining available to purchase here.

Earlier this year You Me At Six released their UK Number 1 album SUCKAPUNCH, hailed by Kerrang as a “creative KO”. SUCKAPUNCH is You Me At Six’s second UK Number 1 album after 2014’s Cavalier Youth, and the sound of a band pushing themselves beyond expectation. Rock Sound describe SUCKAPUNCH as “bold, brash and brimming with attitude and innovation”, whilst the NME said “It’s rare for a rock record to feel this exciting”.CLASH praised “a hard hitting and forward thinking record”, DIY welcomed “a version of You Me At Six we’ve never seen before”, and The Sun confirmed “their most radical record to date” with the Sunday Times Culture adding, “some of their hardest rock is here, but the stand-out is the gorgeous Glasgow, a break-up ballad until it explodes”.
.

SUCKAPUNCH sees You Me At Six pushing the experimentation of their 2018 UK Top 6 album ‘VI’ even further, continuing their creative relationship with that album’s producer, Dan Austin (Biffy Clyro, Massive Attack, Pixies). Sonic influences dive boldly into electronic music, hip-hop and R&B, some of the songs tread entirely new territory, others twist rock into fresh forms. All of it springs surprises. ‘SUCKAPUNCH’ is the sound of a band embracing change, crafting their most experimental, personal and progressive record to date.

You Me At Six are one of the biggest and most prolific British rock bands of the 21st Century. Their 15 year career has seen four UK Gold Records and six Top Ten Albums in the UK, 17 consecutive A-List singles on BBC Radio One, multiple sold-out US headline tours, and a Number One rock song in the UK, Australia, and Top Five Rock Radio track in North America, in ‘Room To Breathe’.