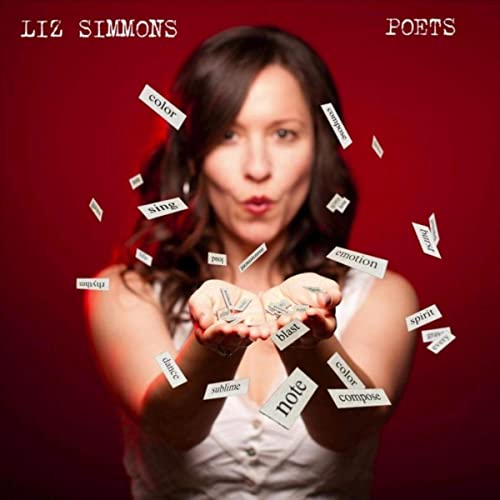 Poets is the gorgeous solo album from Liz Simmons, lead singer of US folk/ roots band Low Lily. The Vermont based trio (Simmons, her husband Flynn Cohen and Lissa Schneckenburger) play acoustic bluegrass music that draws on the traditional to create a modern Americana sound.

This self-produced solo album more of a folk-pop styling and a wide, expansive feel. It features a combination of quite beautiful vocal performances from Simmons and some fine musical backing with pedal steel and dobro prominent throughout. The albums five original songs are appropriately poetic, and sit well alongside a selection of four cover versions.

Opening track When The Waters Rise is a lovely folk ballad, specifically written abut climate change but with a wider sense of dealing with any major change in life. It sets the tone immediately, with its swelling music and passionate vocals. The title track and first single, Poets, deals with the sometimes thin line between fact and fiction. The piano melodies here accompany the vocals very nicely.

Adventurer is a grand and sweeping tale of an epic journey, which also tells of missing home, while Sailing To The Shore features perfect harmonies in a tender love song. Home From The Storm closes the album powerfully, a slow and reflective track that speaks to the fear and longing of waiting for a lover to return from the sea. The nautical themes come from Simmons’ time living on the Massachusetts coast.

The four covers appear carefully chosen, and Simmons makes her mark on each. A lovely version of Fairport Convention’s Who Knows Where The Time Goes brings a bigger sound to an often covered track, with Simmons’ vocal giving a wistful air. This Old Heart Of Mine, best known as a Diana Ross song although originally by the Isley Brothers, is given a sparkling bluegrass edge. It’s very different and quite lovely.

Night In The City, a homage to Joni Mitchell, is an upbeat and almost jaunty version of a classic, with Simmons’ high vocal perfectly pitched. My Love Lies In The Ground might just be the best track on the album. Written by traditional folk musician Dirk Powell, it has a more strident guitar sound, heading towards Southern Gothic territory. The impassioned vocals ae quite superb in a track with a dark and ghostly air.

Liz Simmons has produced an exquisite album of real quality with Poets, the solo format allowing her to show all of her talents. It has a modern folk feel, but there is a great deal of variety within its nine tracks. The large supporting cast she has assembled certainly shows its tremendous talents, but it is the quality of the vocals that make this album so special.