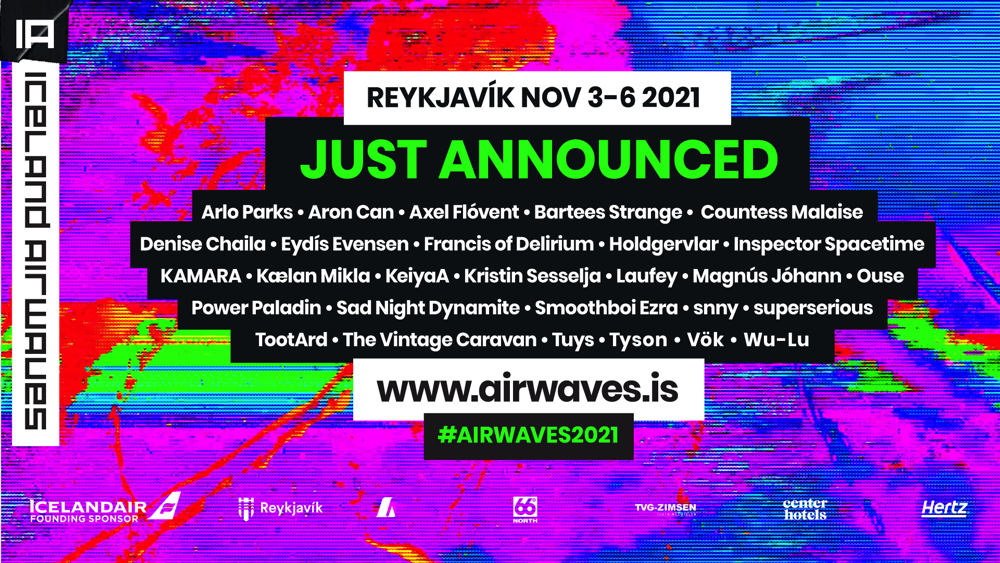 Iceland Airwaves, the world’s hottest new music showcase, returns this November 3-6, 2021. Today, nearly 30 new names are announced, adding to what’s already one of the strongest and most diverse bills in the festival’s 20 plus year history, making 90 acts from all around the world.

With Iceland’s natural wonders often claiming the title “the greatest show on Earth”, Iceland Airwaves is similar in its one-of-a-kind offering. The festival’s musical diversity is as spellbinding as its host city Reykjavík and the incredible nature surrounding it.

Driving today’s announcement comes the UK’s biggest breakthrough artist of the year, Arlo Parks. Having soothed millions with her captivating and poetic debut album ‘Collapsed In Sunbeams’, the 3 time Brit 2020 nominee is being justifiably described as the “voice of a generation”.

Fans of twisted indie trip-hop sounds will want to catch one of the UK’s hottest new acts, the FKA Twigs and Gorillaz-approved duo Sad Night Dynamite. Across the Atlantic, Chicago’s mutli-talent vocalist, songwriter and producer KeiyaA is on an undeniable rise with her woozy electro soul, whilst Bartees Strange‘s debut ‘Live Forever’ is an electrifying mix of opera, emo and hardcore.

With anticipation for this year’s event at an all time high – many buzz-worthy acts confirmed today will be performing live for the first time since 2019, including Luxembourg’s Francis of Delirium and Tuys, the heady clash of post punk and hip-hop of London’s Wu-Lu, Ireland’s pop prodigy Smoothboi Ezra, and rising rap star, and winner of the 2020 RTÉ Choice Music Prize for Album of The Year, Denise Chaila.

Prior to 2020’s successful live stream broadcast ‘Live From Reykjavík‘, Iceland Airwaves’ 2019 edition earned a nomination for Best Small Festival at the NME Awards, for its revitalised mission and flawless execution. With the festival’s forward thinking, collaborative approach and positive global influence, Iceland Airwaves’ reputation for hosting the ultimate annual music gathering stands stronger than ever in 2021.