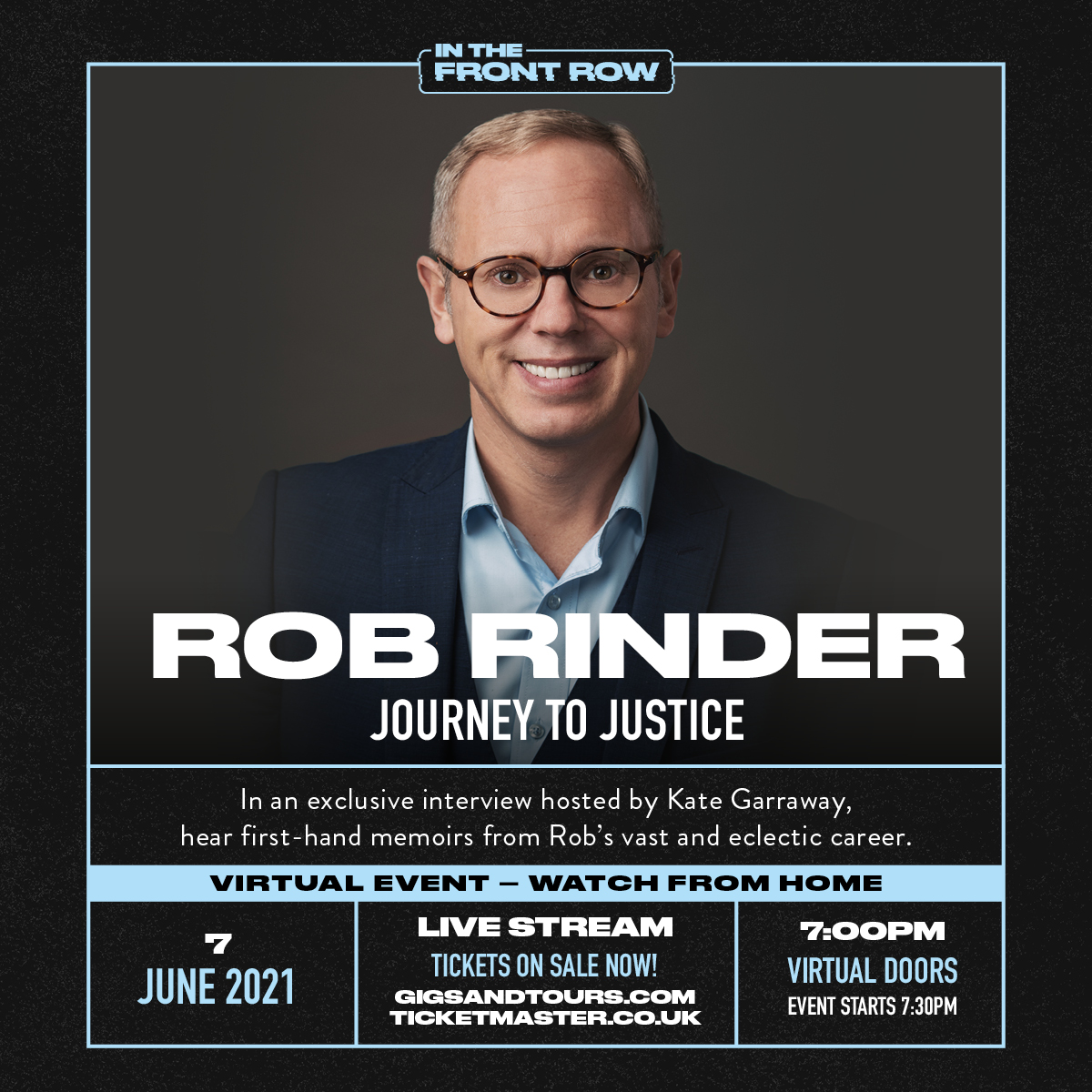 Leading British & International Criminal Barrister and Television Personality Rob Rinder has today announced a live virtual evening for Monday 7th June where he will be interviewed by broadcaster and journalist Kate Garraway. Tickets are on sale now and available from www.gigsandtours.com / www.ticketmaster.co.uk

In this exclusive live interview, fans will get the chance to discover the significant life events that influenced Rob Rinder and have the chance to shape the evening by asking questions, take part in criminal poll debates, go live with Rob himself, and hear first-hand memoirs from Rob’s vast and eclectic career.

Rob Rinder is a barrister turned writer and broadcaster.  In 2014, while still a practising Barrister, he began starring in his reality court show Judge Rinder, now in its 8th series; and uses his legal knowledge working in the media to make the law more accessible and understandable to the public regularly appearing on shows such as This Morning and Good Morning Britain.

Alongside Judge Rinder, Rob has also presented shows including Judge Rinder’s Crime Stories and The Rob Rinder Verdict as well as hosting his own BBC Radio 5Live series Raising the Bar aiming to demystify the legal system. His participation in series 15 of Who Do You Think You Are? retraced the story of his Holocaust survivor Grandfather and received critical acclaim. Following this Rob embarked on an emotional journey exploring further his own family’s Holocaust stories resulting in a 2-part documentary My Family, the Holocaust and Me.

Along with his screen work Rob has published Rinder’s Rules which provides a thorough guide to everyday legal issues including sections on jargon-busting, consumer rights and common mistakes. He is also a columnist for The Sun and the London Evening Standard newspapers.

Speaking about the show, Rob said:

“I am always asked such a variety of questions ranging from my life as a barrister to moving into the world of media, so I’m thrilled to have the chance to sit down and cover all these topics in one evening while being able to interact with the audience and answer ANY question.

Bring your ‘A game’ as I’ll be keeping you on your toes with our polls and debates and can’t wait for you to take these on!
Luckily, we’ll have my beautiful and brave friend, Kate Garraway, to keep us in line. See you on the 7th June!”

Joining Rob as guest host is British television and radio presenter and journalist Kate Garraway. She began working in television in 1994, when she joined the south edition of ITV News Central as a production journalist, reporter and news presenter.  Kate has worked on ITV News Meridian, the launch of the BBC 24-hour News Channel in 1997, Sunrise on Sky News, GMTV and Daybreak, which in 2014 was replaced by Good Morning Britain with Kate joining as one of the main hosts. The same year, Kate joined Smooth Radio as part of the relaunch of the station. She presents the weekday mid-morning programme, with 2.3 million listeners tuning in to her show each week. Kate appeared in the fifth series of Strictly Come Dancing with professional partner Anton du Beke. She came fourth in 2019’s I’m a Celebrity . . .Get Me Out of Here!

This insightful virtual evening will unveil stories from Rob’s early years to being called to The Bar, accounts from infamous and well documented court cases that he brought to resolution, memorable stories from the popular TV series Judge Rinder, and most recently his significant historical discoveries which gave Jewish families the opportunity to discover the full truth about what happened to their relatives during the Holocaust. This is Rob Rinder’s Journey to Justice.