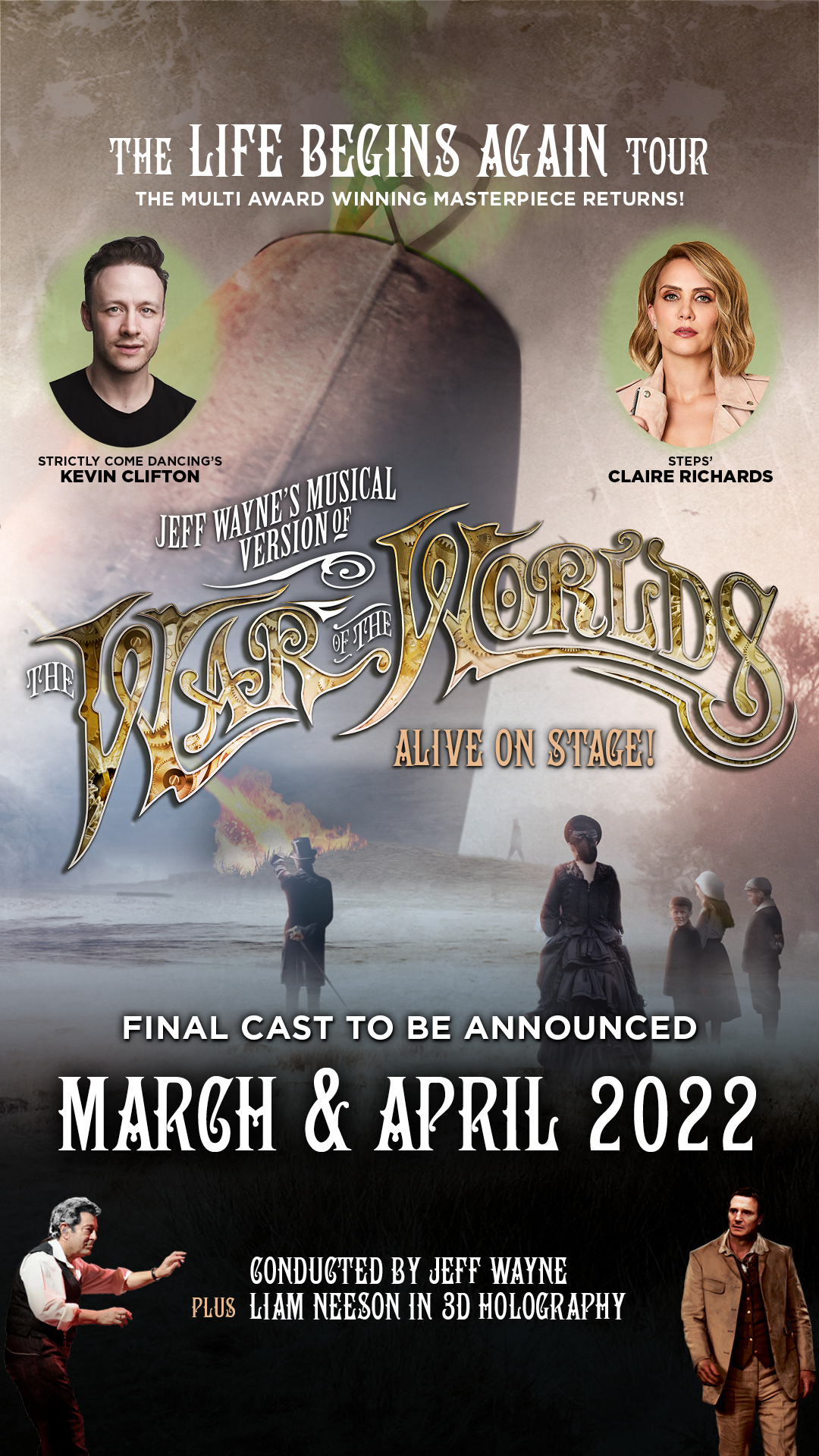 One of the most trailblazing arena tours of all time, Jeff Wayne’s Musical Version of ‘The War of The Worlds’ – Alive on Stage! returns to arenas throughout the UK in 2022.

Steps’ and stage star Claire Richards makes her debut as Beth, The Parson’s Wife. With Steps,Claire has amassed fourteen Top 5 singles (including three Number 1’s), and three multi Platinum albums, including 20 million in record sales and seven sold-out arena tours. Claire is often our TV screens, including The One Show, Loose Women, Celebrity Big Brother and Popstar to Operastar, and her 2019 solo album, My Wildest Dreams, hit the UK Top 10.

Claire said: “I am so thrilled to be joining the cast of Jeff Wayne’s The War of The Worlds for their 2022 Arena tour. To be a part of such an iconic production is so exciting, and I’m really looking forward to getting back out on the road next year.”

Strictly and West End star Star Kevin Clifton will debut as The Artilleryman. Kevin has thrilled audiences in the West End and across the UK, starring in ‘Rock of Ages’, ‘Dirty Dancing the Musical’ and ‘The Wedding Singer’.

Now, he’ll be returning to the stage in 2022 for this exciting role. Kevin is best known as a Pro Dancer on BBC One’s, ‘Strictly Come Dancing’ being the only pro dancer to ever dance in four consecutive finals.

Kevin said “I am unbelievably excited to be joining the cast of Jeff Wayne’s The War Of The Worlds. In 2022 this particular story could not be more relevant. After so long without live performance, what better experience could there be than this spectacular arena production complete with a full live onstage orchestra and special effects. ‘Life Begins Again!’ “

Based on HG Wells’ dark Victorian tale, it remains a firm favourite to millions around the world.

In 2006 TWOTW was considered a cutting edge production with six trucks filled to the brim. In 2022, marking a momentous 16 years of touring, the production will be up to 12, and with it, a host of ingredients and special effects that will challenge and excite the senses for audiences of all ages, all set to Jeff’s iconic score.

Jeff said: Why are we calling this The Life Begins Again Tour? It’s certainly a name appropriate for the times we have been living through since the first lockdown in 2020, caused by the pandemic.  But ironically, the title comes from a musical phrase in my original 1978 double-album just as Humanity learns that the Martians, with all their superior intelligence, incredible machines and weaponry, hadn’t foreseen one particular thing – the common cold, and the bacteria that caused it. And in a sneeze, they were gone! Now from all over Britain, mankind began returning to their homes. Life was beginning again. By 2014 I decided that original musical phrase should be expanded into a full song, performed by all the characters we have met along the way, and it has appeared in every tour and production since.

HG Wells conceived his story’s ending with Human bacteria defeating the invading alien force. But how could he have possibly known, that over 120 years later, a virus born on Earth, would appear and reap havoc on innocent people of all ages, colour and ethnicities, world-wide. Let us hope, that like HG’s Martians, this horrible disease is being truly defeated, as life will begin again.”

Jeff Wayne’s double album was originally released by CBS Records in 1978 featuring Richard Burton,the Moody Blues Justin Hayward, David Essex, Julie Covington, the It has enjoyed huge success and critical acclaim across the globe with over 16 million records sold and spending over 330 weeks in the UK Album Charts (to date) plus achieving two International hit singles – ‘Forever Autumn’ and ‘The Eve of The War’. It has been Top 10 in 22 countries and Number 1 in 11 of them. In 2012 the New Generation double album was released and featured an expanded story-line with a new cast including: Liam Neeson, Take That’s Gary Barlow, Joss Stone and Kaiser Chief’s  Ricky Wilson..

Jeff Wayne’s Musical Version of ‘The War of The Worlds’ has grown into a true classic, acquiring new generations of devoted followers since its original release. It has now been seen in London’s West End, a chart-topping 5-hour Audible Audiobook featuring Michael Sheen, Taron Edgeton and Theo James, and in  2019 opened at London’s Old Metal Exchange Jeff Wayne’s The War of The Worlds: The Immersive Experience and winning the THEA Award, the ‘Oscar’ of the interactive world. Now Covid compliant, it is re-opening again from May 22.

The 2006 DVD topped the UK Music DVD Charts for 7 consecutive weeks and was seen for a year on Sky Arts TV, and the 2012 DVD also enjoyed great success.