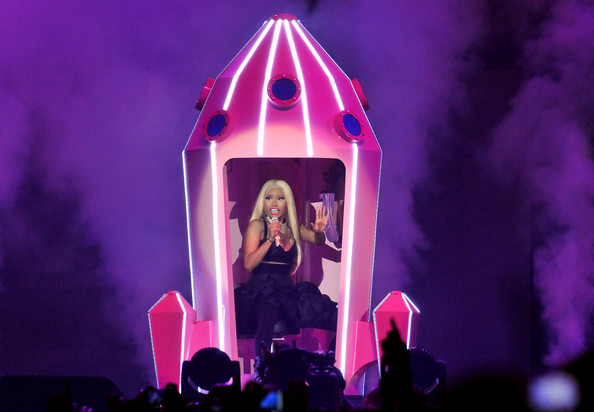 Nicki Minaj, the most successful female rapper of all time, unleashes her groundbreaking 2009 mixtape, Beam Me Up Scotty, on streaming platforms for the first time today. This year marks the 12-year anniversary of the iconic collection, and the first time she has blessed fans with its commercial release.

The seminal mixtape cemented Nicki as a future icon when it initially landed on April 18, 2009.

Recognized as an undisputed landmark release, Beam Me Up Scotty launched Nicki’s first hit “I Get Crazy” [feat. Lil Wayne]. At the time, the song vaulted into the top 20 of the Billboard Hot Rap Songs chart and top 40 of the Hot R&B/Hip-Hop Songs chart. Beyond reworking notable hits such as Soulja Boy Tell’em’s “Donk,” DJ Khaled & T-Pain’s “Go Hard,” and V.I.C.’s “Get Silly,” the 23-track opus heralded Nicki as an elite rapper with expansive vision and earth-shattering promise.  Her signature flow scorched originals such as “Kill Da DJ” and “Keys Under Palm Trees” and placed her in grasp of the throne as Queen…

Expanding the original tracklisting, she also locks and loads Beam Me Up Scotty with standalone anthems “Boss Ass Bitch (Remix)” and “Chi-Raq” (with G Herbo) as well as three brand new tracks including her newsong“Seeing Green” (with Drake & Lil Wayne), “Fractions,” and “Crocodile Teeth (Remix)” (with Skillibeng).” Check out the full tracklisting below.

Recently, Nicki’s hit “Anaconda” passed 1 billion views on YouTube. She’s the first female rapper to accomplish such a feat on a solo track and now has six music videos with over the billion-view mark.

This year, Nicki will also release a new docuseries coming to HBO Max. The series is directed by six-time Emmy® nominee Michael John Warren, who made his directorial debut with Jay-Z’s “Fade to Black.” Each of the six half-hour episodes of this untitled project will explore Nicki’s brilliantly creative mind and tell the story of her personal and professional journey. With complete honesty, Nicki will guide viewers through the most challenging and fulfilling times in her life, navigating highs, lows and misguided agendas in her stratospheric rise to fame and her journey to motherhood.

Until then, experience Beam Me Up Scotty again or for the first time now and stay tuned for more from Nicki Minaj.