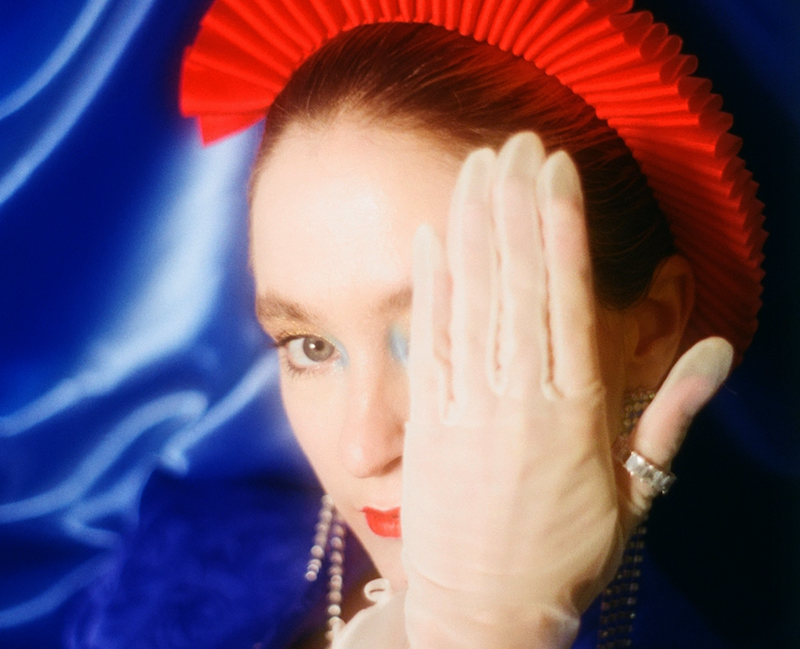 London-based artist Zoee is set to release her debut album ‘Flaw Flower’ on June 25th via Illegal Data. Today, Zoee is sharing her new single & video “Evening Primrose“, which is taken from the record.

Zoee offered an insight into the track, saying “This a nighttime song, with metaphors of flowers blooming in the dark and the healing power of the Evening Primrose flower. It’s also about throwing up in a Carhartt bag on a night train after being dumped and the mania that ensues.”

On the visuals, Zoee said “The video is directed by Daniele d’Ingeo who always brings my lyrics to life with such thoughtful and playful ideas. Dani had dressed up for a Zoom party during lockdown, which then inspired the cardboard cut-out concept for the video. We enlisted painter Coralie Burke to create these surreal nighttime scenes of London –  a rat in the headlights, a chorus of stoned, opera singing evening primrose flowers, some terrified moths. It feels so fulfilling to collaborate with other artists who tune-in to the concept but also add their own spin on the world you create in a song.”

Director Daniele d’Ingeo added “I find it very interesting to explore the relationship between digital art and the craft that inspires it. The video is influenced by both contemporary instagram filters and the cutouts used in traditional theatre sets – the original form.”

Having previously released singles through Ryan Hemworth’s ‘Secret Songs’ imprint and Vegyn’s label Plz Make It Ruins, as well as guesting as a vocalist on tracks with Hot Chip’s Joe Goddard and with hyper-pop collective PC Music, Zoee has taken the past two years to nurture her voice and her sound for her debut.

‘Flaw Flower‘ is an honest and vulnerable glimpse into Zoee’s interior world, a world she creates through marrying her real-life phone notes with imagery taken from modern works of literature such as “The Flowering Corpse” by Djuna Barnes, Sylvia Plath’s “A Winter Ship” and Maggie Nelson’s “Bluets“. Through these 11 new songs, Zoee delves deep into her own emotional life, combining aspects of the everyday with the surreal in order to uncover the beauty found in being flawed.

The record nods to the avant pop of the 80s, an era that Zoee has always been drawn to thanks to the expressive and trailblazing music of women including Anne Clarke, Joan Armatrading, Cyndi Lauper, Rose McDowall and Anna Domino.

The album is characterised by a mix of hi-fi and lo-fi instrumentation. ‘The Loft’ features a free jazz solo from acclaimed experimental saxophonist Ben Vince alongside stock GarageBand synths. ‘Host‘ combines home demo backing vocals with an elaborate baby grand piano solo. Zoee sources foley sounds from YouTube and pulls from her own domestic field recordings, such as a microwave buzzing in ‘Microwave‘ and a shower running in ‘Evening Primrose’, often using these sounds as the starting point for the songs. Maintaining intimate bedroom elements whilst developing a more expansive band sound, felt integral to the project, since that’s where Zoee’s writing process often starts, sat on her bed with her laptop and midi keyboard.

Writing for the album began in October 2018 when Zoee started working closely again with friend and long-term musical collaborator Rowan Martin. As the material for the record began to take shape the writing and recording process also evolved with the addition of bassist Kyrone Oak and keys player Laura Norman, as well as contributions from Ben Vince and London pop artist Saint Torrente.

‘Flaw Flower’ is set for release digitally and on cassette on June 25th via Illegal Data.