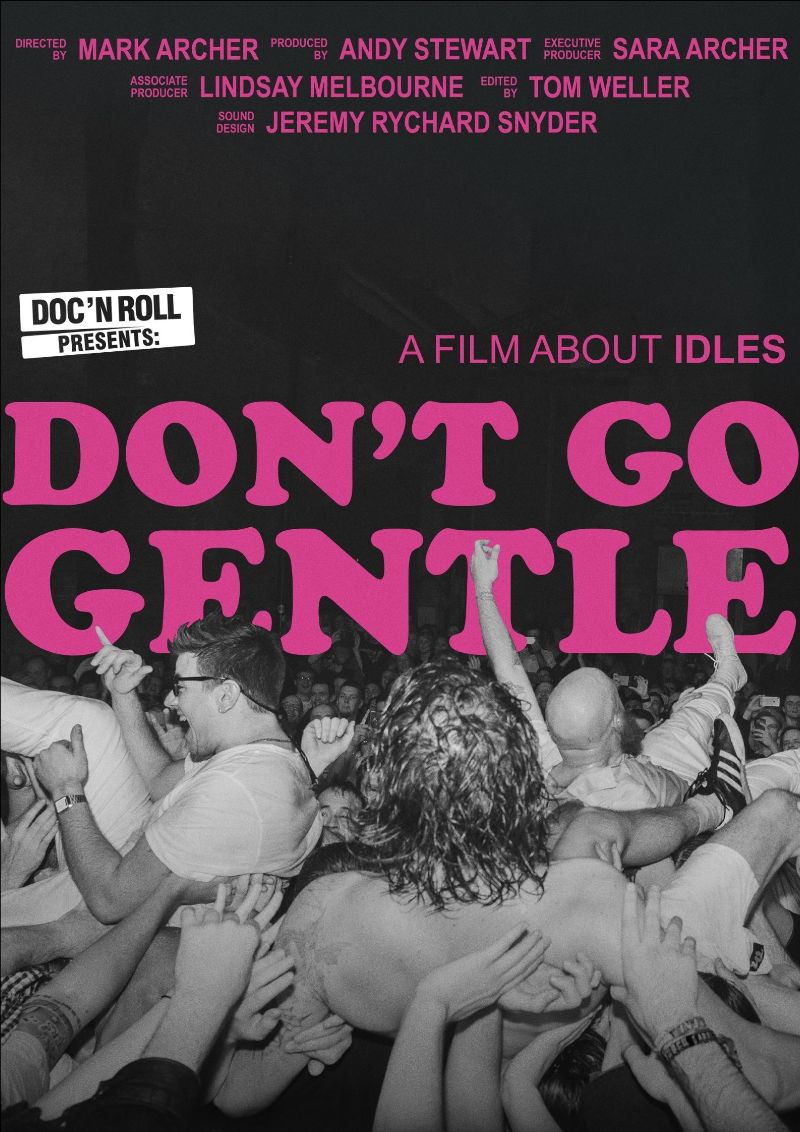 Don’t Go Gentle: A film about IDLES is a 75 minute feature film about finding strength in vulnerability. It journeys through the critically acclaimed Bristol band’s determination, friendship and adversity as they fight for a place in a divided socio-political environment, unexpectedly inspiring and unifying an international community along the way.

The film, which was directed by Mark Archer and received 4*s in NME, will be screened widley in cinemas across the UK and Ireland from 2nd July 2021, with previews and filmmaker Q&A’s running in selected cinemas and venues from 23 – 30 June. See full listings below. Tickets are on sale from Wednesday 2nd June via https://www.docnrollfestival.com/films/dont-go-gentle-a-film-about-idles (Check the site regularly as new screening dates and cities are still being added).

Don’t Go Gentle: A film about IDLES will also be released for VOD streaming for UK and EU customers on 6 August 2021. Pre-order it here.

Don’t Go Gentle captures the 10 year journey of IDLES’ struggle, grief and moving determination. Exploring their vulnerabilities through their experience, lyrics and sound, we learn the reasons why these five individuals have connected with legions of people across the world. We see just how that relationship unfolds in the most courageous and positive of human ways.

In a time when the ground is shifting beneath our feet, where open communication and truthful reflection are more vital than ever, we journey with lead singer Joe Talbot and the band as they tear across stages, knocking down stereotypes, empowering fans to talk about mental health and the realities we may not feel comfortable to speak about.

IDLES are a British rock band formed in Bristol in 2009.

The first five years saw the band release just two EP’s to an uninterested music industry, but after life changing events and a ‘never say die’ attitude, the band took things into their own hands by self- releasing their debut album Brutalism in 2017. The album was met with critical acclaim that exposed them to larger audiences that set in the ground work for the follow up album Joy as an Act of Resistance.

The band now enjoy a global following and with their lyrical content tackling such subjects as grief, immigration, depression, racism and class, IDLES have amassed plaudits celebrating them as one of the most important guitar bands of modern times.

The AF GANG is an online community of like minded souls, born from a thought of group founder Lindsay Melbourne in March 2017.

Meeting fellow fans at early IDLES gigs, conversation was had about creating a group that people could join and discuss their love of IDLES and talk about the gigs they had attended. Friendships were instantly formed as people quite naturally began to talk about more things than just this band they loved. The group quickly grew into something no-one saw coming and now boasts over 30,000 members worldwide.

It’s not wrong to say that this group has had and will continue to have the ability to change lives through the kindness and the love and support many of us need.

No one is alone.  All means everyone.  Community.

This feature documentary was originally born out of Mark’s interest in the journey behind IDLES’ music. In March 2017 he wrote to IDLES manager Mark Bent expressing his desire to make a short film highlighting their inspired 8 year journey culminating in the band’s biggest show to date – supporting The Maccabees at Alexander Palace. There was no idea at this stage the film would turn into what it became. In the same month, Sara Archer came on board to support the passion project by sourcing crew/equipment, budgeting, hosting interviews and beginning talks with potential distributors. Mark then met music photographer Lindsay Melbourne with an eye to include her photographs in the film, but Lindsay was to become much more involved, becoming one of the producers on the film and paved the path to an even bigger project.

During production IDLES found new success, breaking down walls with their first album Brutalism. Lindsay told Mark of the growing IDLES fan community ‘AF GANG’. As a result of Joe’s lyrics and his honesty on stage and in interviews, the AF GANG became a place where people would open up without judgement, quickly becoming an online support group to those that didn’t have one. It was a domino effect with IDLES leading the way publicly discussing mental health. The potential of IDLES’ growth, along with their community of fans excited the team and they committed to turning this short film into a feature with IDLES and now the AF GANG at the centre of the story.

Throughout the production the film took many forms with multiple re-edits necessary, being the team’s first feature no stone was left unturned. The film was completed during quarantine in May 2020 – a story in itself.