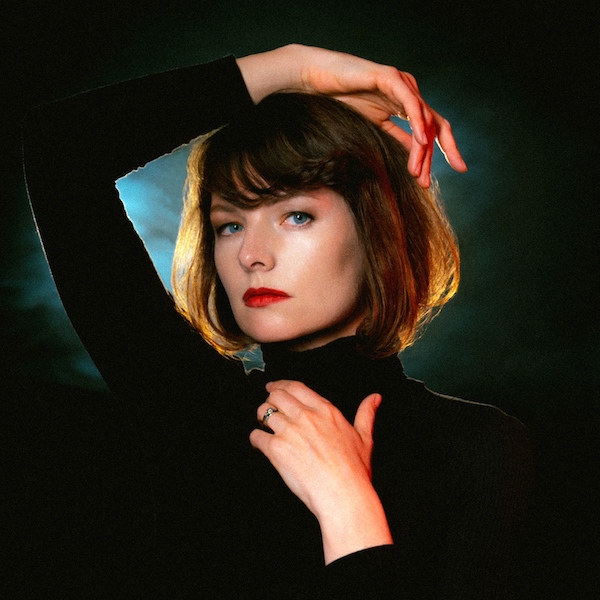 To celebrate the release of her new album ‘Midnight Train‘, which came out last week via Italians Do It Better, Margate-based, Australian multi-instrumentalist Jorja Chalmers is sharing her new single and video “I’ll Be Waiting“, which follows on from previous single “Bring Me Down“.

Jorja Chalmers enjoys a quiet life. The Australian born mother of two lives in Margate, the Kent coastal town that is turning into something of a cultural hub. Yet there’s another, shadow version of Jorja Chalmers, one that resides in a liminal realm; a saxophonist and composer, a brooding, vampiric, twilight soul who yearns for some sense of aesthetic transformation.

It’s not been a straight-forward path. Burned out following years of classical studies in her native Sydney, Jorja travelled half-way round the world looking for an escape. Settling for some ad hoc office jobs in London, she started kicking around in bands, playing saxophone for a friend’s new wave project. Someone from Bryan Ferry’s team spotted her at some flea-bit bar, and was infatuated – soon Jorja started touring the world with Roxy Music.

Jorja’s 2019 debut album ‘Human Again’ was sketched in hotel rooms across Europe and North America, ideas punched out on down-time between shows. Open ended and lucid, its formless, dreamy atmospherics touched freely on darker aspects of the psyche. This time round, however, things are a bit more defined. “A lot of those songs were one take jams, it was improvised. This is more refined,” Jorja insists. “It’s a natural progression, this second album. It feels more mature in that way.”

‘Midnight Train’ is a treasure trove of ideas. Indeed, it could well be the album Jorja had waited her entire life to make – aspects of minimalism sparked by a teenager who spent countless hours memorising Michael Nyman’s seminal film score for The Piano, set against cinematic electronics and swathes of huge, enveloping, classical dynamics.

“I want it to sound immersive, like it’s wrapping you in a blanket,” she says. Indeed, she cites Rachmaninoff’s epic work The Rock as a key touchstone on the new record. “It’s something that my parents used to blast out of their stereo when I was a kid. I heard it a million times. It’s strange to be hearing a song that is so dramatic when you’re that young. It’s a beautiful piece. It’s one of those things that leaves an imprint on you.”

With Johnny Jewel returning as Executive Producer and Dean Hurley – David Lynch’s music engineer – handling the final mix, ‘Midnight Train’ feels concise, and sharpened. Cannibalising her influences, Jorja Chalmers has been able to pursue her creative appetites to their most extreme. Yet even at its most challenging, her new album revels in the sheer joy of creation. “Making this album was really freeing,” she explains. “I loved writing this album. I always write in the same way, but I think that lockdown provided me with lesser distractions. Writing is such a personal thing for me – being in your little cave, and creating. That’s the beautiful moment for me.”