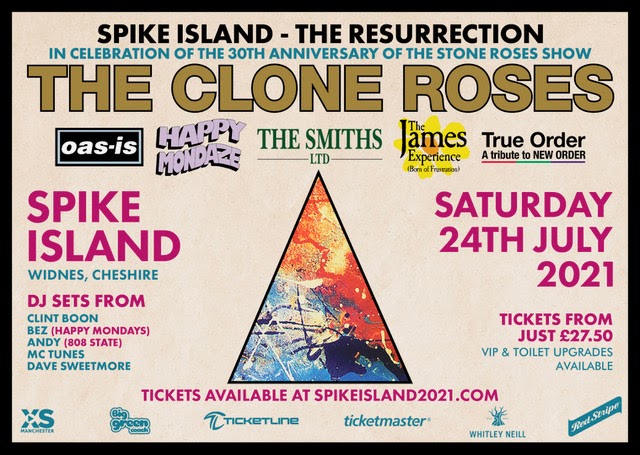 Announcing the return of live music in emphatic style – SPIKE ISLAND – THE RESURRECTION – will take place this Saturday (24th July).

One of the first major music events to take place in post-lockdown Britain, Spike Island: The Resurrection will host a day of celebrations in commemoration of the 30th Anniversary of the Stone Roses’ era-defining gig at Spike Island, Widnes.

As well as re-opening the original site to music fans for the very first time since that historic gig in 1990, the event is also on course to break records as the biggest tribute-themed festival the world has ever seen!

With a headline set by THE CLONE ROSES (the UK’s No.1 tribute to The Stone Roses), the celebratory music festival will aim to re-capture the sights, sounds and atmosphere of what is widely considered as one of the greatest shows ever. The event will also see performances from other top-tier tribute acts including: OAS-IS, THE SMITHS LTD, HAPPY MONDAZE, THE JAMES EXPERIENCE, and TRUE ORDER; plus a number of original faces from the iconic Madchester scene including BEZ (Happy Mondays), CLINT BOON (Inspiral Carpets), ANDY (808 STATE), and MC TUNES (Dust Junkys).

With just days to go, the festival is now pleased to reveal the full set times for the day as follows:

Alongside the music, the festival is also laying out a variety of beverages and tasty foodstuffs at stalls across the site, serving Burritos, Burgers, Indian, Greek, Spanish, Pizza, fish’n’chips, plus vegan and gluten free options to keep revellers topped up throughout the day. A number of vintage clothes stands will also be selling their wares and flares to help you recapture that true Madchester look.

To facilitate all purchases made on site, the festival recently announced it will be operating a 100% cashless system to help provide an easier, faster and safer service. As such, a cashless wristband with credit installed will be needed for purchasing any drinks, food or merchandise while on site. For further details on how to top up your wristband on site or before arriving, please head to: http://spikeisland2021.com/cashless

With over 5000 tickets snapped-up on its first day alone and 95% of all tickets now sold, the public reception to the festival has been nothing short of phenomenal. With the festival on-course for a roaring sell-out success, last and final tickets are on sale now. Don’t miss out, get yours here: www.spikeisland2021.com

On 24th July, SPIKE ISLAND: THE RESURRECTION invites music fans everywhere to come together at Spike Island, Widnes to rejoice in a day all about Roses and resurrections…