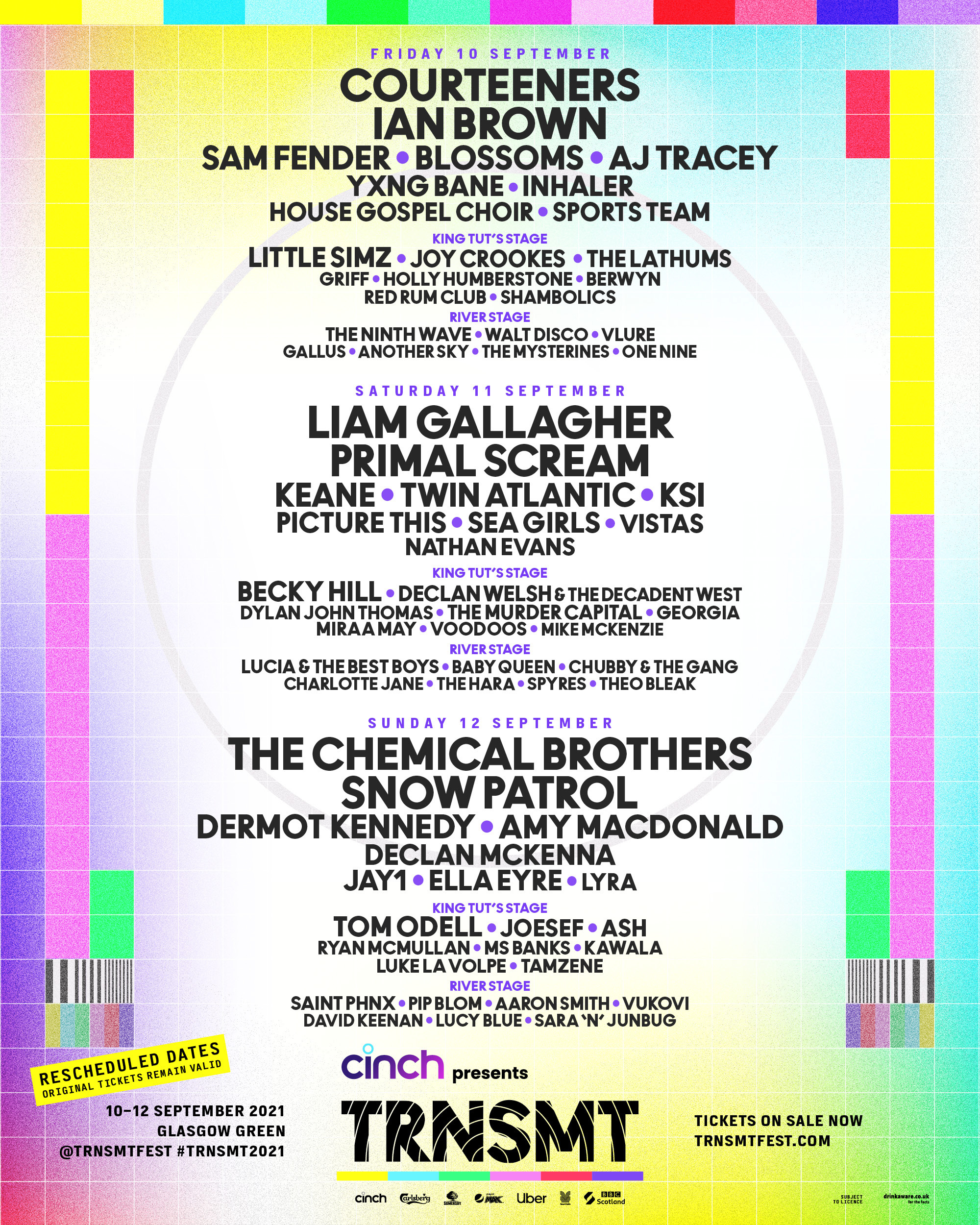 The hugely anticipated return of cinch presents TRNSMT Festival 2021 is nearly here. With just 50 DAYS to go, the countdown is officially on for Scotland’s biggest music festival as an outstanding array of acts prepare to descend on Glasgow Green over the 10th-12th September, much to the delight of music lovers across the country. This year’s event will prove particularly special after an incredibly challenging seventeen months for the music industry in Scotland, and further afield.

One of the most exciting events in the UK’s festival calendar, cinch presents TRNSMT will provide fans with the opportunity to see out Scotland’s summer in style, with a host of the biggest and best in the UK music industry set to perform including headliners Courteeners, Liam Gallagher and The Chemical Brothers. Taking place in Glasgow’s city centre, the festival will see fans discover their new favourite artists, with over 70 acts performing across the Main Stage, King Tut’s Stage and the River Stage.

Friday’s Main Stage line up sees Manchester favourites Courteeners return to the festival for the first time since their epic set in 2018’s sunshine, joined by some of the biggest rising stars in the music scene including Sam Fender, Blossoms, AJ Tracey, Inhaler and more.

Saturday 11th September will see a homecoming of sorts for the one and only Liam Gallagher, as the frontman headlines the Main Stage and returns to cinch presents TRNSMT following a memorable set in 2018, joined by Scotland’s own Primal Scream and Twin Atlantic and many more.

Closing the festival in style, The Chemical Brothers will make their festival debut at cinch presents TRNSMT for what is sure to be a very special set. Sunday 12th September will also see Snow Patrol, Dermot Kennedy, Amy Macdonald and more play Glasgow Green’s iconic stage.

Fans can also expect to see the rising stars of the future at cinch presents TRNSMT as some of the UK’s hottest acts make their festival debut including Little Simz, Declan Welsh & the Decadent West, Joesef, Griff, Georgia, Berwyn, Spyres and more.

Boasting world class acts, mouth-watering street food, delicious drinks and all-round good times in one of the most vibrant cities in the country, the festival will be an unforgettable weekend to round off summer 2021.

Event organisers are committed to following government and local council guidance which may be in place at the time of the event to ensure the safety of all festival goers, artists and staff. cinch presents TRNSMT have hygiene measures in place as standard and these will be increased to the appropriate requirements in response to conditions in September.

Don’t miss out on the return of Scotland’s most exciting music festival; cinch presents TRNSMT 2021 tickets are on sale NOW and available from WWW.TRNSMTFEST.COM