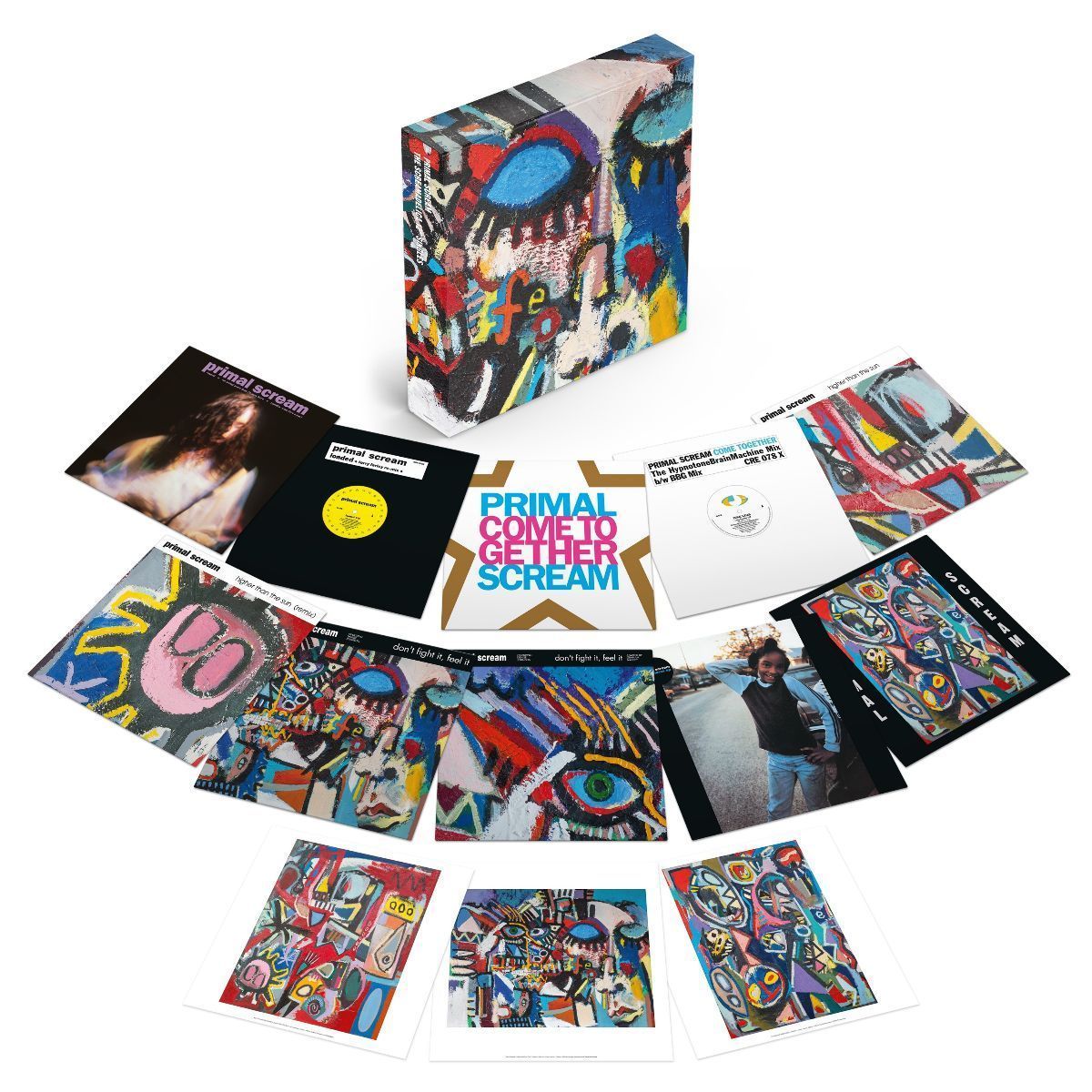 Originally released in 1991, Primal Scream’s ‘Screamadelica’ is one of those rare records that’s indisputably an era-defining, all-time classic. Its hedonistic collision course of club culture and rock roots made Primal Scream one of the most critically adored bands of recent decades, and took them into the Top 10 for the first time, later becoming the first ever album to win the Mercury Prize. Its singles, including ‘Movin’ On Up’, ‘Loaded’ and ‘Come Together’ remain dancefloor and radio favourites to this day.

The ‘Screamadelica’ 12″ Singles Box (out September 17th) features nine replicas of the singles from the original campaign, all pressed on 180-gram heavyweight vinyl. It’s completed by a tenth disc, which consists of a previously unheard remix (and accompanying instrumental) of ‘Shine Like Stars’ by the album’s late and beloved producer Andrew Weatherall. The box also features three art prints by the album’s cover artist Paul Cannell and a download code.

The previously unreleased ‘Demodelica’ collection (out 15th October) provides a new insight into the album’s creation, with a variety of early demos and work-in-progress mixes. It will be released on digital, double-vinyl, CD and C90 cassette formats. The package will be completed with new liner notes by Jon Savage. The author and journalist is renowned for documenting British music culture with books such as ‘England’s Dreaming: Sex Pistols and Punk Rock’ and ‘The Hacienda Must Be Built’.

All three releases are now available to pre-order here.

Bobby Gillespie reflected on ‘Screamadelica’ during an interview with VICE. He commented:

“It feels amazing to have made an album that when you walk into a record store then you see it up on the wall along with albums like Ziggy Stardust, Transformer, and Never Mind the Bollocks. As well as seeing Astral Weeks by Van Morrison, you see the first Velvets album and you see Screamadelica. And you’d probably see Led Zeppelin IV. You know what? That’s beyond my wildest dreams when we started as a band.

It’s a pure record. It’s very from the heart and sincere and we are very proud we made it. It is also a great document of the times—that is exactly what it was like. We were out there in the clubs, taking ecstasy, and living the rock and roll life.”

Primal Scream will return to the festival circuit this summer. They’re set to play TRNSMT (September 11th) and headlining the Big Top stage at the Isle of Wight Festival (September 16th – 19th). Plans are also taking shape for 2022, with the Bingley Weekender, the Low Festival, and two nights at Glasgow’s Kelvingrove Bandstand and Amphitheatre already confirmed.

Bobby Gillespie recently teamed up with Jehnny Beth of Savages to release the critically acclaimed duets album ‘Utopian Ashes’. He will also release his memoir ‘Tenement Kid’ in October. A book filled with the joy and wonder of a rock ‘n’ roll apostle who would radically reshape the future sounds of fin de siècle British pop, Bobby Gillespie’s memoir cuts a righteous path through a decade lost to Thatcherism and saved by acid house.