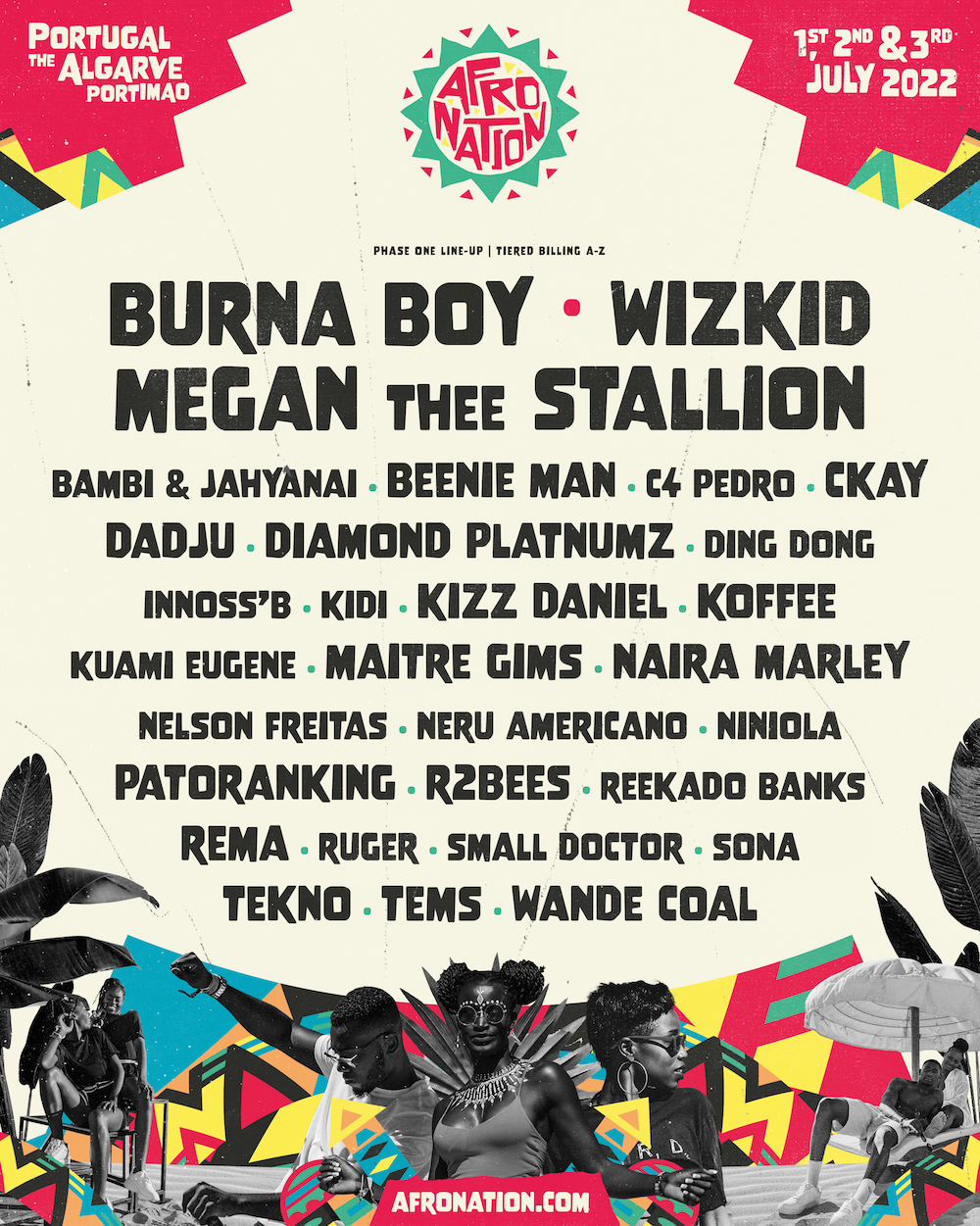 After huge anticipation and nearly two years away, Afro Nation has announced the first details of its grand return in summer 2022 – boasting the biggest lineup of the summer that unites the sound of global culture all in one stunning location on Praia Da Rocha Beach in Portimao, Portugal.

Following its 2019 debut, Afro Nation revolutionised the global festival calendar with an event praised across the board as a landmark moment for Black culture – uniting the diaspora for one unforgettable celebration in one of the most picturesque locations on the planet. Making summer memories and marking itself as a must-visit destination in the diary, nobody could have predicted that the wait would be two years until we could unite once again in the glow of Afro Nation…

Returning in style, Afro Nation Portugal 2022 promises to be a summer escape worth waiting two years for. Leading the charge for the festival’s giant 2022 lineup are global superstars who have redefined the cultural landscape over and over. After a momentous 18 months, Burna Boy stands on a whole other level as an artist blazing a trail for the culture around the globe. Fiercely prolific, his passionate love and drive to unite the planet in one collective celebration has seen him become a go-to figure not just in music but far beyond that too. Boasting a rapturous live presence that has seen him transform festival fields and arenas alive, and with the Grammy Award winning sounds of recent album ‘Twice As Tall’ ready to receive a heroes welcome – there’s no name better to headline Afro Nation Portugal’s anticipated return than Burna Boy.

There’s only one Star Boy. An international superstar that has led a true revolution in modern music throughout his career – Wizkid makes his long-awaited return to Afro Nation following the mammoth success of latest album ‘Made In Lagos’. Selling out arenas on every continent, he sits at the very top of the Afrobeats world – influencing modern culture and the world around him in the process. Itching to get back on stage, Afro Nation Portugal is set to be a true homecoming for a pioneer in the game and one headline set that’s sure to be talked about for years to come.

THE most talked about phenomenon not just in music, but across pop culture over the past 18 months – Megan Thee Stallion touches down at Afro Nation Portugal for what’s sure to be an incendiary performance on Praia Da Rocha Beach. Scooping awards and record-breaking moments at every turn, Megan has become one of the biggest names on the planet with a string of ready-made party bangers – the likes of ‘W.A.P.’, ‘Thot Shit’, ‘Body’ and ‘Savage’ already set as timeless smashes that have soundtracked the world over the past few years. With magazine front covers, game-changing award show performances, giant brand collaborations and much more already achieved, Megan Thee Stallion heads to Afro Nation Portugal for a landmark set unlike anything else.

Burna Boy, Wizkid and Megan Thee Stallion are just three of the names set to come together at Afro Nation Portugal 2022. The legend himself Beenie Man will touch down on Praia De Rocha Beach with the sort of party-ready set that’ll be sure to scoop the crowd into a thrilling festival memory. Jamaica’s own Naira Marley will bring the energy with a boundless set full of tracks and moments that have come to define Naira as one of this generation’s very best, while Koffee heads to Afro Nation Portugal 2022 – fresh from an unforgettable summer of jaw-dropping festival performances that confirms her place as one of the most essential new voices in modern reggae. With the likes of Diamond Platinumz, Rema, Tems, Patoranking, Wande Coal, Kizz Daniel, Tekno, Dadju, Maitre Gims, R2Bees, CKay, Ruger and more also confirmed as a part of the first wave of names heading to Afro Nation Portugal 2022 – it immediately sets out the fact that Afro Nation are not playing about, coming to seize its crown as an absolute movie simply waiting to be made once again.

With these initial names just a small slice of the latest and greatest ready to book their trips to Praia De Rocha Beach next July, Afro Nation Portugal 2022 is set to be the grand return of an event that means more than simply the music. Under sunny skies, together again with like-minded people and vibing to the biggest artists on the planet – it’s an essential date in the diary that can’t be beaten. By the culture, for the culture.

With demand expected to be high for Afro Nation’s incredible return in 2022, fans are encouraged to sign-up now for priority access to pre-sale tickets. You can sign up now at https://afronation.com/ for the first chance to get tickets before anyone else, with Pre-Sale tickets going on-sale from 9am on Friday 5th November before General Release tickets go on-sale from 12pm on the same day.