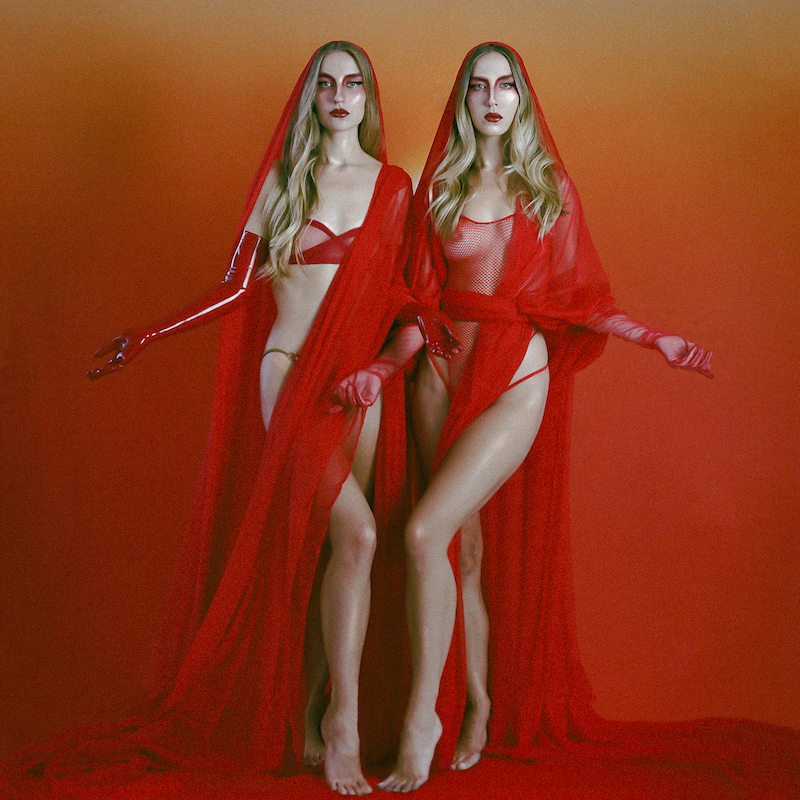 Made up of twin sisters, Larena and Elyse, MOTHERMARY have announced their debut album ‘I Am Your God‘ is due Jan 28th via Italians Do It Better. The first single from the record “Coming For You” is streaming online now.

Leaving behind the Mormon religion both sisters grew up in to move to New York is how MOTHERMARY came into existence. Inspired by the modular synth and drum machine sounds of the 1980s, the band makes art pop and synth wave that’s utterly singular — a sort of musical retrofuturism, a dazzling hybrid of the old and the new.

When Larena picked up and moved to New York several years ago to join with her twin sister Elyse, she was in a dark place, paralysed by despair and uncertainty.

Like Elyse sometime earlier, Larena had just done the seemingly impossible. She’d left the religion she’d belonged to her entire life — the religion she’d grown up with, that had been everything to her for twenty years. She was liberated. But she was also unmoored. “If you were able to fall for something for so long, admitting to yourself that it’s all bullshit is the most humbling and horrifying thing in the world,” she explains. “You question everything. You question the nature of reality.” It was her sister who saved her, her sister who had gone through all this before. At the time Elyse was channeling the pain into music — a kind of dark-wave electro pop that she was writing and producing herself. She invited Larena to join the band.

“It makes sense,” Elyse told her. “You’re my twin. We went through this experience together. We tell it together.” she said.

Larena and Elyse grew up in Missoula, in northwestern Montana, the youngest of nearly a dozen children. A family of Mormons. It’s not a casual religion, Mormonism. The sisters read scripture every morning, prayed every day. They attended service several times a week, and on Sundays, attended four-hour meetings at the church. It was more than a belief system. “It was our world. It was our paradigm,” Larena says about those days. “We were brainwashed.”

At the same time, they had doubts. They were wary of the cultish dimension of the community; they disliked instinctively the racism and homophobia, the sexism that made them ashamed to be women. “We were made to feel that we were second-class to men in our church and our family,” Larena says. “We had to be pretty, but not too pretty. We had to be pretty enough to attract a mate, but not too pretty to be sexualized.” The intense pressure, the impossible standards — it was too much. They both knew they were bigger than the box they were stuck in. “Women can be mothers and nurturing and caring and smart, and we also get to have fucking sex drives,” Elyse says. “We get to enjoy our bodies. We get to enjoy pleasure. We get to orgasm if we want to.”

Elyse was the first to get out. She hitched a ride to Salt Lake City, the next city over, and started working bars, began experimenting with music. She had no idea who she was or what she believed in. “I had to start from the ground up. Did I believe in right and wrong? Did I believe in God?” She made her way to New York and got serious about songwriting, translating her experiences into art. The problem was that every producer she worked with seemed to have very different ideas about how exactly Elyse ought to sound. In the process, they destroyed the music.

So Elyse decided to do it herself, “I wanted to have control over the sound. TOTAL control,” Elyse says. She taught herself how to produce music out of her bedroom in Bushwick. There was no other way. “I’ve always been hyper-specific about how that should sound and what that should look like. No one got the sound I was going for.”

The sound Elyse and Larena have created is indeed extremely specific. Inspired by the modular synth and drum machine sounds of the 1980s, MOTHERMARY makes art pop and synth wave that’s utterly singular — a sort of musical retrofuturism, a dazzling hybrid of the old and the new. The contrast of light and dark — of exquisite, ethereal vocals and dark, even gritty instrumentation — is elusive and engrossing, a unique juxtaposition that’s entirely in keeping with the sensibility of sisters who have always refused to be pinned down or defined.

The name MOTHERMARY says a lot. Mary, the mother of Christ. The ultimate holy woman. Also the ultimate symbol, for the sisters, of religion hypocrisy — of the insane expectations placed on women, both in their religion and in society at large. “She’s a virgin who gives birth to a literal god,” Elyse says. “It’s the perfect example of the contradicting performances we expect of women. These two extremes. Have children, procreate, but don’t be sexual beings.” For Larena and Elyse, making music as MOTHERMARY is about reclaiming the narrative, telling the more honest account. “We want to rewrite the story of Mother Mary,” Larena says. “She’s holy, powerful, and yes, sexual. All women are. We embrace every facet of womanhood. Our creative power and our diversity. We’re tired of being put in a box.”