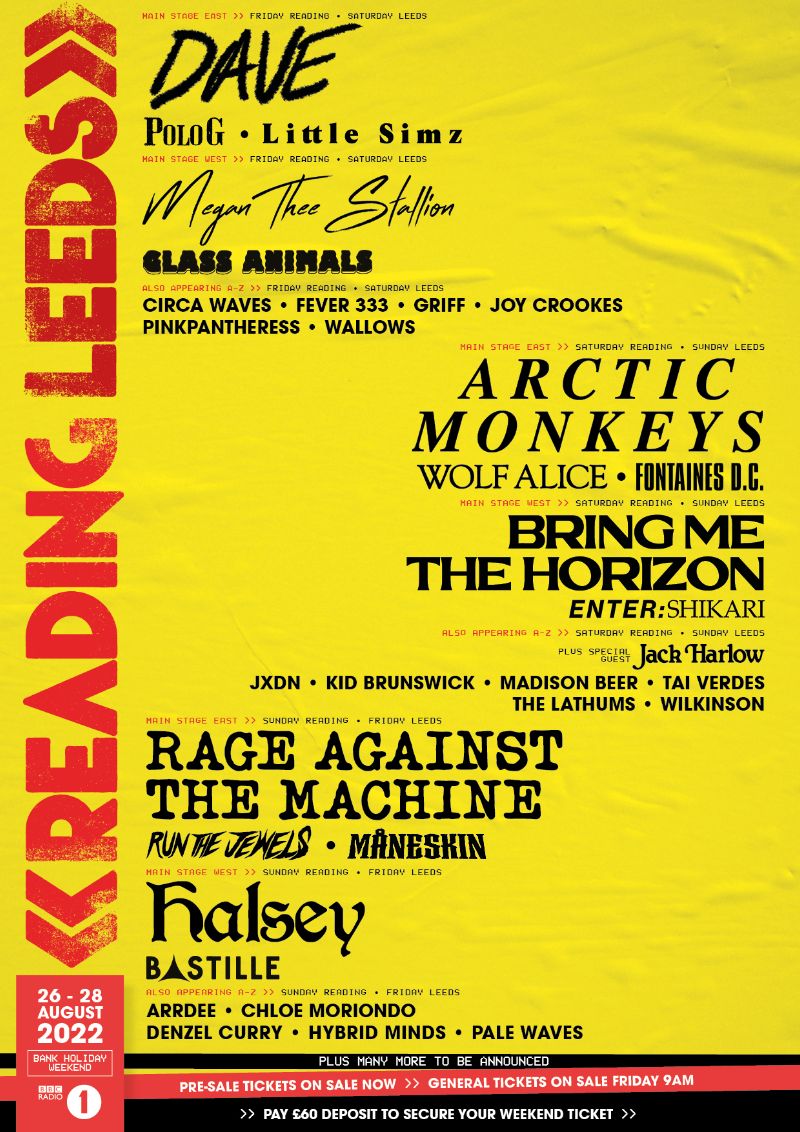 Reading and Leeds Festivals announce today six huge headliners for 2022 as the dual main stage layout returns meaning more massive names and no clashes. Arctic Monkeys, Dave, Rage Against The Machine, Halsey, Megan Thee Stallion and Bring Me The Horizon will be joined by the most exciting talent in rock, indie, alternative, hip-hop and dance including Wolf Alice,Glass Animals, Enter Shikari, Joy Crookes, Little Simz, Run The Jewels, Fever 333, Pale Waves with even more yet to be announced. The three-day festival takes place on 26-28 August 2022, returning to Reading’s famous Richfield Avenue and Leeds’ legendary Bramham Park. General sale tickets and instalment plans available from 9am on Friday 10th December from www.readingfestival.com/tickets and www.leedsfestival.com/tickets

Since first telling the world “don’t believe the hype”, Arctic Monkeys captured the musical zeitgeist and changed the course of guitar music forever. From a self-released EP to becoming one of the biggest bands of the new millennium, no one captures the adrenaline-fuelled ups and downs of nights out, heartbreak, and lust like the Sheffield quartet. Ironic and iconic in equal measure, Arctic Monkeys’ meteoric albums and performances only get sharper and smarter. Playing in the UK for the first time since 2018’s ‘Tranquility Base Hotel & Casino’ tour, they are set for a hero’s welcome as they make their triumphant return to headline the main stage in 2022.

Dave has cemented himself as a bona-fide generational talent at the top of rap’s apex. At only 23 years old and having won nearly every major UK musical accolade possible, he can now count being the youngest ever solo artist to headline Reading and Leeds as another triumph. Dave’s gift is making the inner-city struggles of young people and immigrants universal, through personal storytelling and incredible wordplay. With a trick bag of fan favourites like Location, Funky Friday, Thiago Silva and fresh off the release of new album ‘We’re All Alone In This Together’, Dave is ready to step fully into his star moment.

Rage Against The Machine formed in 1991, rising to acclaim with their fiercely anti-establishment sound merging hip hop, punk and thrash. To date, the band have sold over 16 million records, and are one of the loudest voices in modern music. In times of political hardship, Rage Against The Machine have never been afraid to speak their minds or point a finger at injustice, their previous Reading and Leeds performances have gone down in history – and next year’s headline slot will be no different. With timeless singles such as Killing In the Name and Guerilla Radio in their repertoire that still resonate with the masses in 2022, the Los Angeles legends are set for an unmissable performance.

Innovator and visionary Halsey needs little introduction. Their trailblazing streak has long made the US star stand apart from the crowd since their breakthrough 2015 album ‘Badlands’. Uncompromising and disruptive, Halsey has pushed boundaries and raised bars with her ambitious, creative music on their own terms. Through constant reinvention, whether building dystopian worlds, crafting their own mythology and alter-ego or exploring the “joys and horror” of motherhood on latest album ‘If I Can’t Have Love I Want Power’ – Halsey’s rise reflects an artist who made the music world evolve with them and is destined to headline the biggest stage of all.

Three-time, Grammy-winning recording artist Megan Thee Stallion is set for a monumental debut main stage west headline set. Before becoming one of the biggest musicians on the planet, Megan rose to prominence with her viral freestyles and captivating cyphers. Several smash songs and projects later, the Houston Hottie has since proven herself as the vital voice the music industry needed. Megan Thee Stallion, with her laser accurate flow and subversive anthems like Body, Savage and WAP, can now add headlining Europe’s most exciting festival to her résumé.

Sheffield alt-metallers Bring Me The Horizon have become the biggest band of their generation. Their nearly 20-year strong career has seen them develop from rough-and-ready deathcore upstarts to a slick, pop-metal hit factory with two Grammy nods and consecutive No 1 albums. The five-piece led by frontman Oli Sykes have relentlessly carved their own path from sweaty rock club basements with their futurist approach to the genre. Now with the world at their feet, Bring Me The Horizon will take their rightful place headlining the prestigious main stage at Reading and Leeds Festival.

Bring Me The Horizon said: “To be headlining Reading & Leeds was never even a dream of mine as it’s something I could never imagine happening..  I just never saw our band as a festival headline act. But now it’s happening I promise you we are going to put on the best show of our lives for you lot.”

London rapper Little Simz joins the bill following her lauded fourth album ‘Sometimes I Might Be Introvert’ and fresh off her MOBOs Best Female Act win. Run The Jewels who remain at the top of the US hip-hop pile with the free-spirited stylings of Killer Mike and EL-P, Chicago rapper Polo G has been unstoppable as one of music’s top rising talents as well as Kentucky rap sensation and 2021 breakout star Jack Harlow.

Drum and bass legend Wilkinson is set for an epic appearance headlining the Dance Stage and will be in good company with the liquid duo Hybrid Minds confirmed. As well as trend-generating songwriter Tai Verdes, Bath-born PinkPantheress whose impeccable debut mixtape capped off a huge breakthrough year, Wigan’s finest indie upstarts The Lathums and LA feel-good indie trio Wallows complete the first wave.

Melvin Benn, Managing Director of Festival Republic said: “With so many amazing acts set to play, Reading and Leeds is set to return as the ultimate festival weekend of the summer: defining the sounds of modern ground breaking music. I cannot wait!”

Fans can be the first to hear further line-up announcements, artist news and much more by signing up to the newsletters at www.readingfestival.com and www.leedsfestival.com.