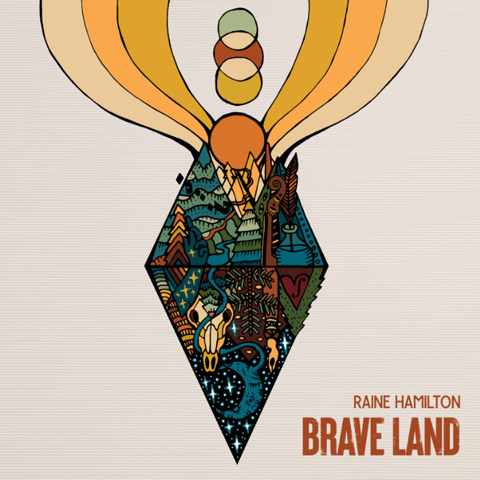 Canadian songwriter Raine Hamilton’s third album is a bright and uplifting work. Described as chamber folk, it fuses acoustic folk with classical music, as guitar, violin, double bass and cello are combined with a series of quite beautiful vocal performances. The songwriting is perceptive and the musicianship is of a high quality throughout.

Hailing from Winnipeg, Raine was raised in a musical family. A classically trained violinist, they were writing songs from an early age and boast a Canadian Folk Music Award for Emerging Artist of the Year, among other accolades.

Brave Land is a concept album, using mountains as a metaphor for courage and wisdom. The music evokes strong feelings of open space and solidity, and examines our connections to the natural environment. It is easy to understand that Hamilton wrote several of these songs in the Rocky Mountains. There are many highlights among the eleven tracks, which were released on a monthly basis online throughput 2021.

Mountain Henge has a simple melody and a wide sonic scope. Hamilton’s vocal range is displayed to the full here with great effect in a track that builds and swells. The gospel tinged opener Love Has Come For Me has a celebratory feel, telling of learning to love yourself. Over The Mountain has a slow pace, with vocals over guitar opening the song as the high notes are effortless reached.

It Matters, a more strident folk song in the protest tradition, has real power. Responding to racist abuse by a police officer experienced by Indigenous elder Gramma Shingoose, Hamilton uses words forcefully to highlight this appalling case. A Lover’s Word in total contrast is close to a traditional folk song, its starker musical arrangement expressing vulnerability as the strings back warm vocals.

Raine Hamilton wasn’t a name I knew before hearing this album, but I will be listening to their first two albums very soon. The musical style is unusual, but the songs created are both thought provoking and affirming. Brave Land gives an excellent introduction to a talented musician with much to say and the skills to deliver her message with grace.