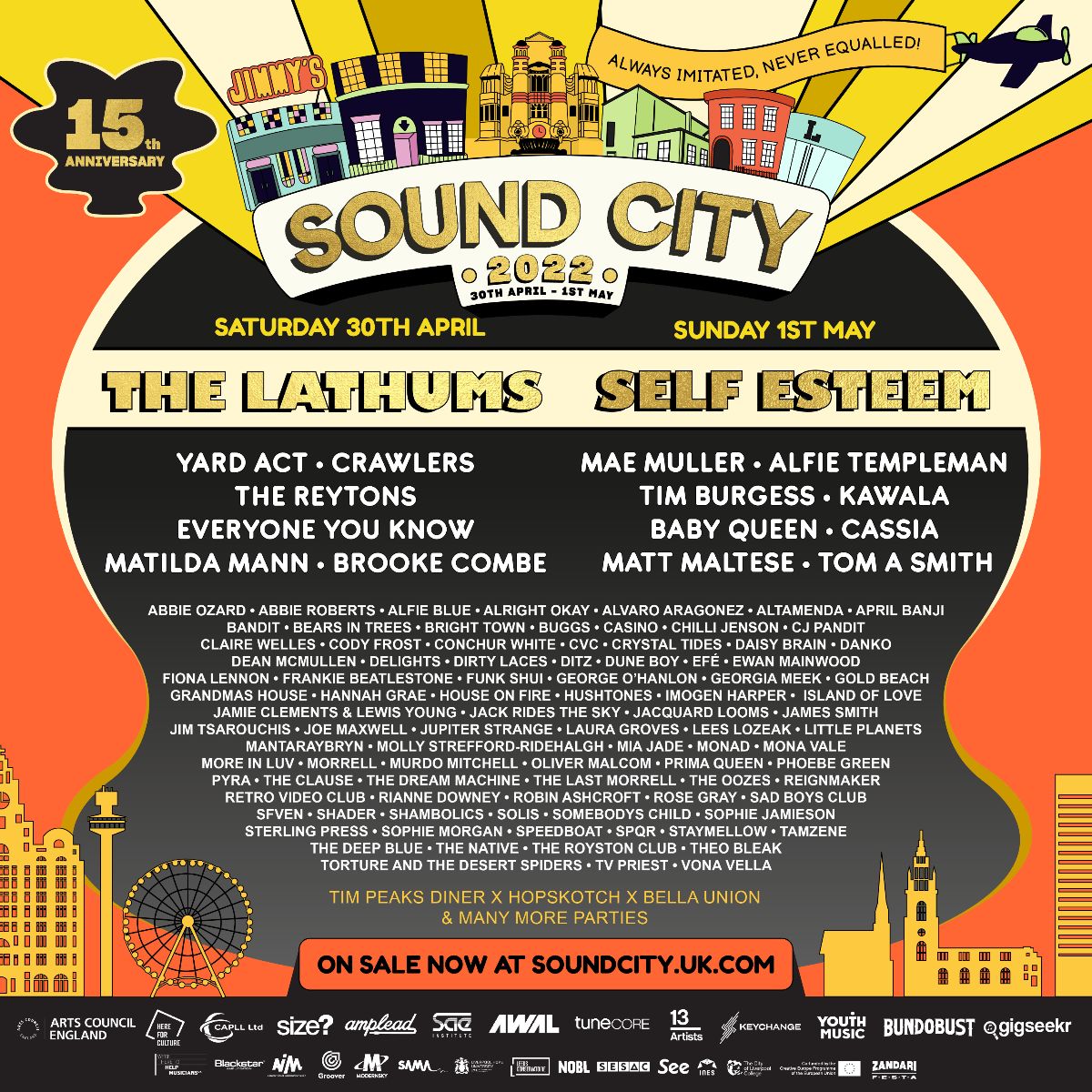 Continuing to innovate, grow and provide the perfect platform for the best in essential new music, Sound City has today announced a host of new names and stage takeovers for their 2022 edition, building further anticipation for what promises to be a huge 15th birthday for the acclaimed city festival.

Emerging across the streets of Liverpool back in 2008 as a heralded celebration of new and exciting music, Sound City has become an essential date in the diary for music fans far and wide to come together and discover the sounds of the future. Nestled in a European capital of music culture, its storied alumni who have made those first steps at Sound City reads as a who’s who of the biggest and brightest names in modern music (from the likes of Ed Sheeran, Stormzy, The xx, Alt-J and Courtney Barnett to The Wombats, Royal Blood, Catfish & The Bottlemen and many more).

Joining an incredible range of names already announced for 2022 – including headliners The Lathums and Self Esteem alongside recent chart-smashers Yard Act, Alfie Templeman, The Reytons, Mae Muller, Baby Queen and more – Sound City continues to show its sterling reputation as the home of new music discovery. Today sees a host of new names join the festival bill alongside some incredible stage takeovers and exclusives.

Leading the charge, Indie icon Tim Burgess will be headlining a truly special showcase in honour of 25 years of Bella Union Records. Founded by Cocteau Twins in 1997, the award-winning independent label has been home to some of the most genre-defining releases the indie world has ever seen, from Father John Misty to Beach House via Spiritualized, and of course Tim Burgess himself. The Charlatans’ frontman looks set to bring a remarkable show to Liverpool that will no doubt define the weekend for many.

Other stage takeovers across the weekend include BBC Radio 1’s Jack Saunders, who will be bringing his raucous ‘Hopskotch’ showcase to the festival. Home to the biggest emerging indie names, his nights have become the stuff of legend in the capital over the last few years. Indie champions Modern Sky will also be hosting a stage across the weekend, showcasing some of the best new alternative talent in the country, while Run On Records bring an incredible new showcase hot off the heels from releasing The Coral’s acclaimed new album Coral Island.

On the artist front, a multitude of exciting new names have also joined the lineup today. Dubbed “one of the most exciting bands to come out of Manchester in years” Cassia’s fresh take on alternative indie pop makes them a fantastic edition which will be sure to draw a huge crowd. Modern punks DITZ are also joining the party in 2022, with a live show that has been compared to Fugazi, the Brightonians have seen acclaim from the likes of NME, Loud And Quiet, DIY and more. Signed to Nice Swan Records (Sports Team, The Rills), Prima Queen have also been announced today. Sitting on what feels like a constant upward trajectory, the band looks set to have a huge summer this year. Elsewhere, new Third Man Records signing Island of Love will be travelling up to Liverpool for what promises to be a raucous performance, while double NME award winner PYRA will bring her hugely exciting brand of hyper-pop to the festival direct from Thailand.

In hugely exciting news, Bandzai winners Monad will be joining the lineup after winning the global battle of the bands competition organised by the festival. Beating hundreds of entries from across the globe, their brand of dream-pop wooed the judges and are the perfect fit for the festival.

Continuing their long-standing relationship, Sound City is once again the UK’s lead festival partner for Keychange, a global movement focused on the restructuring of the music industry to achieve gender equality. Sound City are committed to championing gender equality across all of their global musical projects from Sound City Korea, Ipswich and their pioneering streaming platform Guesthouse. Leading a vast array of festivals and events across the UK and beyond, the focus remains on achieving a gender balance across all Sound City events and initiatives. Sound City is the UK’s lead festival for Keychange, a global movement to ensure that women and diverse genders are represented in music.