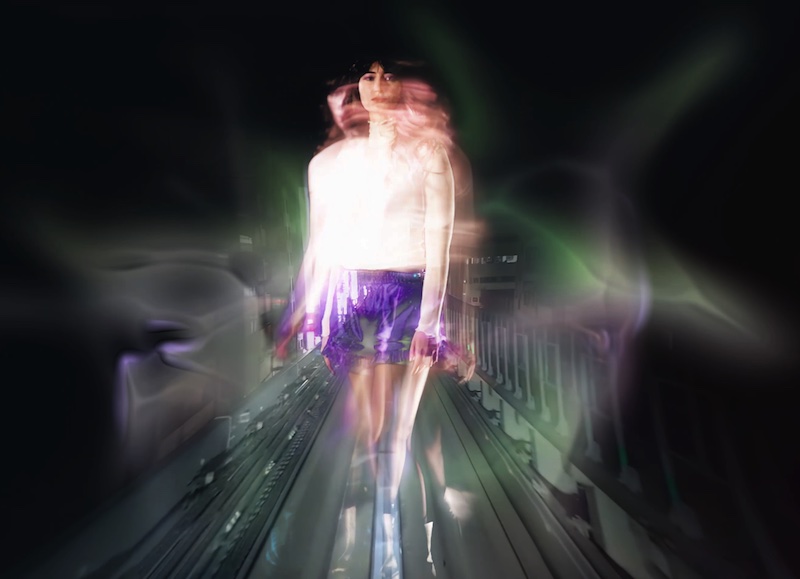 Ahead of their album release ‘New Meaning‘ on April 1st via DAIS, New York City duo Tempers have revealed their new single “Sightseeing” along with its striking video created by Clayton McCracken (Charli XCX, Erick The Architect).

The LA-based video synthesist crafted a sensational audio-visual composition for “Sightseeing” by using a mixed bag of touchdesigner programming, vintage video technology, 3D animation, and live improvisation. His work predominantly deals with the role of natural forces in virtual environments, utilizing lights, liquids, and vapors to explore themes of entropy and technological impermanence which thematically fit hand in hand with “Sightseeing“. Tempers’ Jasmine Golestaneh explains, “‘Sightseeing’ looks at the thrill and struggle of urban life. It’s a song about finding meaning by constantly dissolving, renewing, and redefining oneself, amidst the machinery of the city. The video explores how psychic traces left by memory can transform architecture, and animate parallel worlds. It’s also a continuation of an ongoing theme in our work, investigating the relationship between public and private space.”

Tempers’ forthcoming album New Meaning is distinctly nocturnal music, elegantly introspective and quietly intense. Jasmine Golestaneh’s voice is both ethereal and towering as Eddie Cooper breathes life into the precision of electronics, and of melodic intervals.

Tempers present an album about navigating the unknown, coping mechanisms and exploring the nature of choice. Its ten songs reflect on the creation of meaning as an access to liberation in times of transition and loss, speculating on the transformative potential that exists alongside the grief of living in a world that is in an ongoing state of crisis.

New Meaning is a document of forking paths and fleeting transcendence, the celebration of instability and impermanence, of embracing “a constant state of becoming.” Ten anthems for a derailed age, fugitive and sympathetic, nightwalking through an “anguished city” towards a nameless future, poised for rebirth.

The album comes with a companion book of original artwork and lyrics. Golestaneh created a hand-made collage for each song, translating its sonic landscapes and lyrical themes into concrete images. The book is published by Old Habits Press.