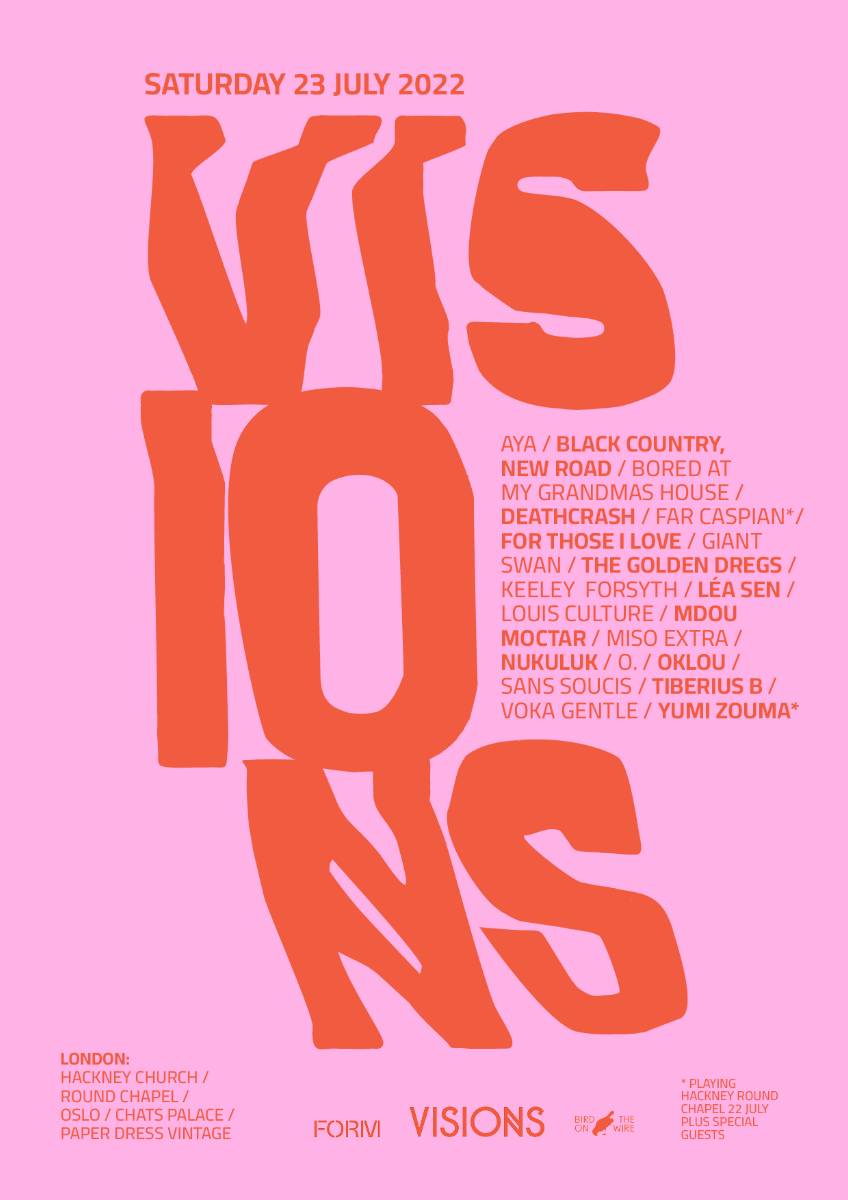 Today VISIONS festival is delighted to announce its return for 2022, and its first wave of exciting acts. The East London multi-venue festival is back with a bang, following last year’s memorable sellout event with the likes of Yard Act, Porridge Radio, Billy Nomates, Flohio, Grove and more, just moments after restrictions were lifted for a celebratory edition. 2022 sees the festival return in fully fledged format, with a hugely exciting line-up of acts of the moment, a new summer date and an exciting set of spaces for the event spread across Hackney.

As VISIONS returns once again, the Hackney one-dayer has become a key alternative moment in the festival calendar, and this year is set to take place on Saturday 23rd July. VISIONS has grown each year, adding new venues and outdoor spots, whilst maintaining a carefully curated approach, and has been regularly critically revered for its cutting edge line-up, offering something different to a lot of the other summer events.

VISIONS is excited to announce Black Country, New Road will be topping the bill – the British rock band released their second album Ants from Up There last month which landed them their second Top 5 album. This special performance will also showcase their new live line-up and be the first London appearance since the album release.

The rest of the line-up is as ever focused on musical variety and diversity. The festival is thrilled to welcome the likes of Niger’s breakout rock success Mdou Moctar, critically-lauded electronica from Dublin’s For Those I Love, actor-musician Keeley Forsyth, Bristol punk-rave duo Giant Swan, French electro-pop from Oklou, hugely hyped rising start Miso Extra, artful UK electronica producer aya, London post-rock band deathcrash, rapper Louis Culture and indie-folk from The Golden Dregs. Exciting newcomers Léa Sen. Tiberius B, Nukuluk, Sans Soucis, O., Bored at My Grandma’s House and Voka Gentle complete the initial announcements for the Saturday, with even more to be shared soon.

Visions is also delighted to announce a special Friday event (Friday July 22nd) for 2022 at Hackney Round Chapel featuring a co-headline between two exciting dream-pop breakthrough acts – Yumi Zouma and Far Caspian. Limited tickets are available for this event, with Friday/Saturday tickets also available. Further special guests will be announced across both dates in the coming weeks..

This year will see the festival move into newly selected spaces for their takeover, including the newly renovated Hackney Church, Hackney Round Chapel, Oslo, Paper Dress Vintage, Chats Palace and some outdoor courtyard spaces with craft drinks and other specialist offerings, as usual.

Focusing on accessibility and highly alternative entertainment, VISIONS first tier tickets are priced at an affordable £25.00 and are likely to sell quickly as usual. Tickets for the Friday event are priced at £16.50, and bundles for both are available for £37.50. Tickets go on sale this Friday 25th March HERE.