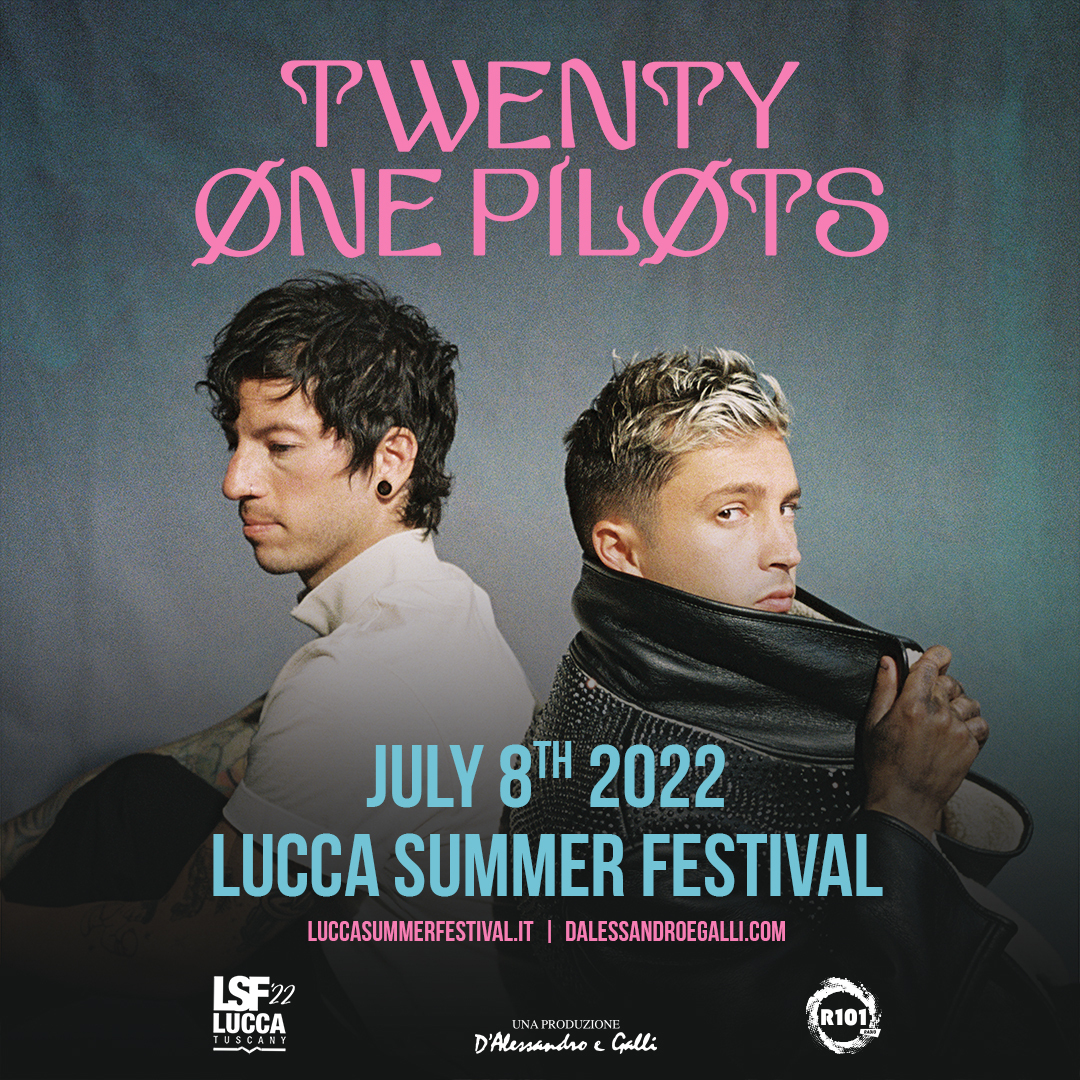 Lucca Summer Festival is thrilled to announce the completion of 2022’s sensational line-up with the addition of global superstars, Twenty One Pilots with a show in Lucca’s historic square, Piazza Napoleone on Friday 8 July.

GRAMMY® Award-winning Twenty One Pilots quietly emerged as one of the most successful bands of the 21st century and redefined the sound of a generation. After billions of streams and dozens of multi-Platinum certifications around the world, the history-making Columbus, OH duo—Tyler Joseph and Josh Dun—ascended to a creative and critical high watermark on their new full-length album, Scaled And Icy. The album debuted at No. 1 on Billboard’s Top “Rock Albums” and “Alternative Albums” charts, while landing at No. 3 on the “Billboard 200,” marking the biggest opening week for a rock album in 2021. Among a collection of anthems, Scaled And Icy spawned “Shy Away,” which spent eight consecutive weeks at #1 at Alternative Radio, as well as “Saturday” and “The Outside,” both of which also climbed to #1 at Alternative Radio. Scaled And Icy follows Twenty One Pilots’ 2018 Platinum certified album TRENCH, which features the platinum singles: “Chlorine,” “My Blood,” and the GRAMMY® Award-nominated “Jumpsuit.”  The album graced spots on “Best of” year-end lists by Billboard, KERRANG!, Alternative Press, and Rock Sound—who placed it at #1.

Formed in 2009, the guys grinded towards this moment following the mainstream breakout of 2015’s BLURRYFACE. Certified quadruple-platinum in the U.S., it was declared the first album ever to have every one of its songs certified Gold or Platinum by the RIAA, and garnered a GRAMMY® Award for the Diamond certified “Stressed Out.”  In 2019 Twenty One Pilots announced that their 2013 LP Vessel achieved the same Gold & Platinum milestone with every individual track from the album receiving Gold, Platinum or Multi-Platinum certification from the RIAA, making the duo the first artist / group with two albums to reach this landmark achievement.

The month-long Lucca Summer Festival is one of the most anticipated musical events in the Italian summer with legendary artists performing across the city in historical venues. The 2022 line-up already features Justin Bieber,Nick Mason’s Saucerful of Secrets, Liam Gallagher + Kasabian, Robert Plant + Alison Krauss and John Legend with Celine Dion confirmed for 2023.

The Rolling Stones took to the Lucca stage in 2017 to a sell-out crowd of 55,000 marking their emphatic return to Italy during their No Filter tour. The prestige of the festival continues with icons such as David Bowie (2002), Elton John (2019) and Bob Dylan (2015) previously gracing the Tuscan city, giving this festival a wealth of history and importance in the Italian concert calendar. Tickets for Twenty One Pilots at Lucca Summer Festival are available now on www.luccasummerfestival.it
FULL LINE-UP