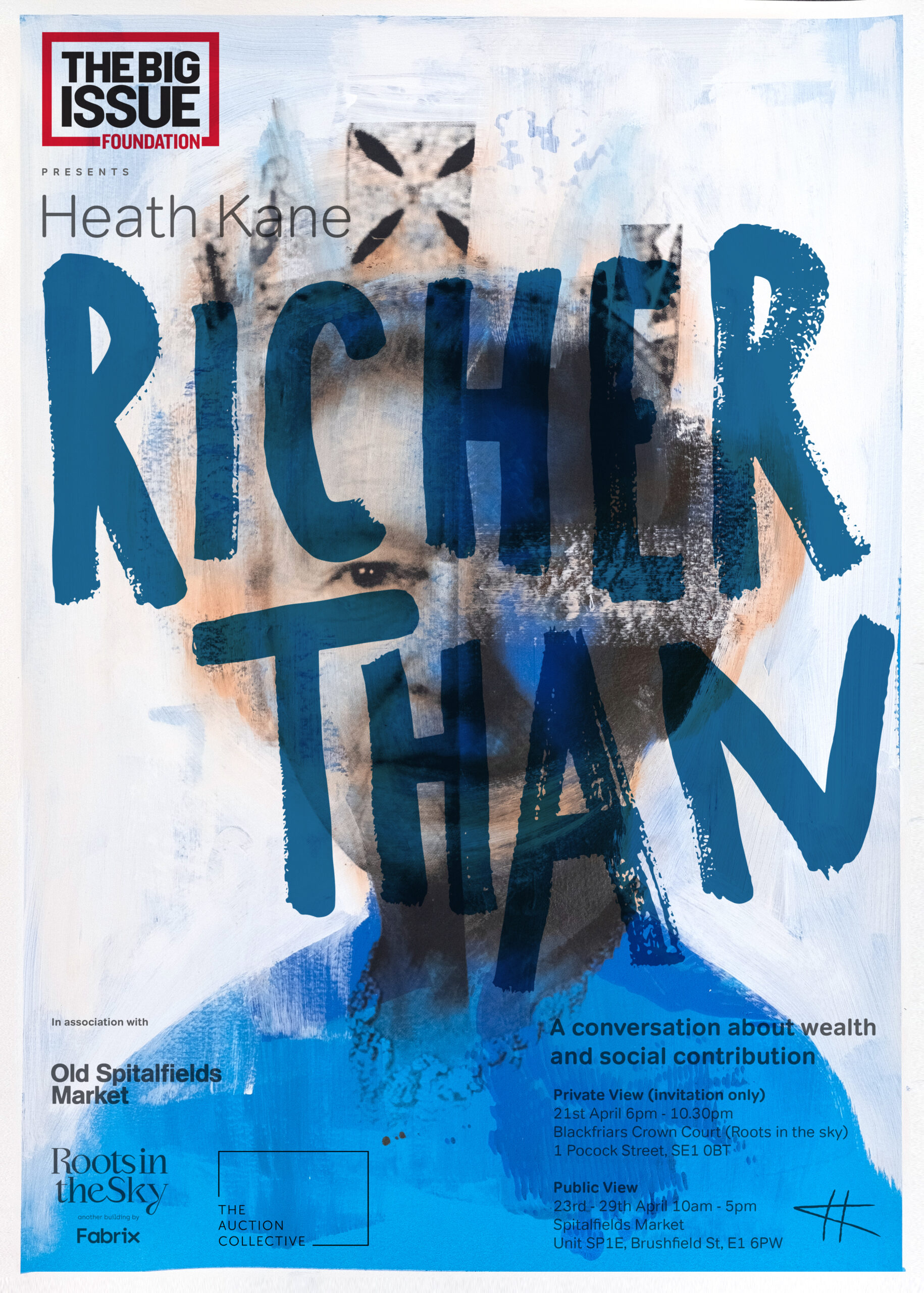 The Big Issue Foundation and UK-based contemporary artist Heath Kane announce the launch of ‘Richer Than’, an exhibition and timed auction fundraising event, held with the building owner and London investor Fabrix.

The Richer Than exhibition and auction is a visual conversation in response to the rising rates of homelessness and poverty in the UK, following the pandemic. With food, bills and energy costs soaring and many living without appropriate support, there will be a tidal wave of homelessness hitting the UK this year. The chasm between rich and poor is growing ever wider and we’re having to fight for the basic human rights of those living in poverty. Heath Kane wants to bring attention to this ‘war at home’.

Heath Kane says: “With everything that is happening in the world right now it’s easy to lose sight of the ever increasing problems on our doorstep . We are so connected as a society online, and so concerned for our virtual presence that we end up disconnected to real anguish when it’s right in front of us. Since the pandemic, the likelihood of households with two full-time workers being pulled into poverty has more than doubled. I hope the Richer Than exhibition raises questions about the current wealth divide. I want to encourage conversations about wealth and social contribution through the idea that with enough money anyone can be a superhero.”

Richer Than will raise funds for The Big Issue Foundation through the timed auction of 50 exclusive pieces of art by Heath Kane. Each piece incorporates a quotation and perspective on wealth, contributed by a cross-section of society. Well known contributors include: Fearne Cotton (podcaster/author/tv presenter), Leigh Francis (tv presenter), Mike Soutar (The Apprentice), Kojey Radical (musician), Dave Buonaguidi (artist), Katie Woods (influencer) and there are also contributions from members of the general public.

Tracy Griffin, CEO of The Big Issue Foundation says: “We are excited to be partnering with Heath Kane for this exhibition. Despite the fact we all use it, we often find it challenging to talk about our relationship with money and wealth – wealth and poverty being polar opposites on a spectrum of good and evil. We need to recognise that wealth isn’t inherently evil. It’s what you do with it that matters. This exhibition gives people an opportunity to engage with these ideas in a relaxed and inspiring way. As well as raising funds to support Big issue vendors working their way out of poverty by providing well-being, financial & digital inclusion support, we believe Heath’s work will enable people to think about wealth and poverty in a different way.”

Richer Than is an extension of Heath Kane’s Rich Enough to be Batman collection. Bold and subversive, the collection provokes questions about wealth and social contribution. The Queen is used throughout the collection as a symbol of wealth and is juxtaposed with the cowl of Batman. The cowl represents Batman’s aim to ‘do good’: he wasn’t superhuman, but instead his superpower was to use his wealth to give back to society.

The private view takes place at Roots in the Sky (formerly Blackfriars Crown Court) on Thursday 21st April with DJ sets from Femi Fem and Karistocat and drinks will be provided on the night. The exhibition then moves over the river to Spitalfields in East London from Saturday 23rd April until Friday the 29th April, where it can be viewed by the general public.

Auction platform The Auction Collective are managing the timed auction of the exhibited artworks. Guests and art buyers worldwide will be able to bid online or in person via a simple QR code system for their favourite piece[s]. The timed auction will begin on Wednesday 20th April and run through until Friday 29th April 2022, inc.