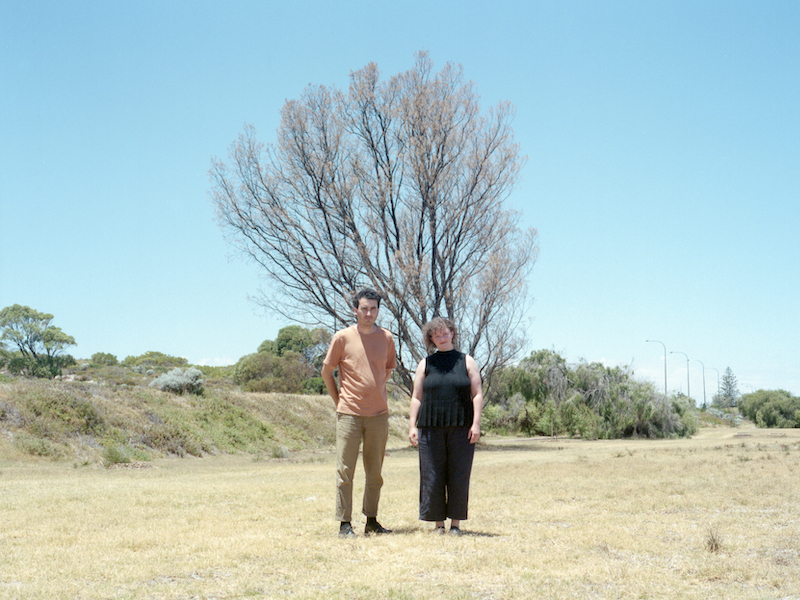 Erasers, the Perth, Australia, duo of Rebecca Orchard and Rupert Thomas have been creating wholly immersive desert–dungeon-synth since they formed in 2009. The duo announced their new record, Constant Connection, which is out April 22nd on Night School Records (UK/EU) & Fire Talk Records (US/ROW), with the eponymous first single, “Constant Connection“, following it up with “A Breeze“. Today they’re sharing the final single, “Easy To See“, alongside a video directed by Lyndon Blue with abstract landscape textures and inverted colors juxtaposed with a swaying spiderweb.

“Easy To See” is a brooding, meditative track, sprawling out while taking stock of their landscape. Tinged with sorrow, the track examines the perceivable effects of humanity’s impact on our environments.

On the track, the band said “This was the last song written for the record and really felt like the missing piece of the puzzle. Starting with sounds of nature and a wonky synth loop, we kept things as minimal as possible, giving the words and voice as much room as they needed. The words feel like a fitting match for the mood of the instrumentation in this song, speaking to how as time goes on, we see clearly the impact we have had on our environment. A moody finale to a moody record.”

Erasers create hypnotic compositions of synth, guitar, and voice, evoking the vast expanse of their native landscape and the shrouded emotions beneath the senses. Forming as a home recording project on Whadjuk Noongar boodja (Perth, Western Australia) in 2009, they documented their early sound in a steady flow of CD-Rs, tapes and 7″ releases before signing to U.S. label Fire Talk for their debut album Stem Together in 2015. In 2017 the duo followed up with a tape release ‘Fault Lines’ a soundtrack commissioned by FBi radio’s Ears have Ears and in 2019 released two significant releases, ‘Forecast’ a 5 track EP and their second full length ‘Pulse Points’, with the latter making Bandcamp’s ‘Acid Test’ column’s best albums list for 2019.

On their third album Constant Connection, Erasers have gone further than before in aurally mapping their arid surroundings. Based in Perth, regarded one of the most isolated cities in the world, Orchard and Thomas’s music has brewed in the city’s vibrant DIY/Outsider community and evolved into a meditation on landscape, power, the shadow-world of human emotions and stream of consciousness. Constant Connection, with its waves of sound and chant-like vocals evokes a trance that suggests an infinity just beyond the senses.

Shades of John Cale’s 70s work with Nico, early 70s German synthesists Kluster and even fellow Australians Fabulous Diamonds can be seen as stylistic touchstones for Constant Connection. Where Nico hinted at the macabre and gothic, Rebecca Orchard’s similarly gliding vocal is more zoned in to a kind of oceanic openness, with words becoming chants and spells that suggested themselves to the singer during recording sessions. It’s this hidden hand of improvisatory, automatic writing that lends a sense of expanse to the music. On opener I Understand, while the lyrics might hint at discontent the emotional spectrum it opens up is far more rich and complex, as layered as the waves of droning chords that are the bedrock of each Erasers track. The title track talks of flow, continuum and balance, the protagonist in the song seemingly weightless, gently pulled through a walking reality that borders on dream. In Erasers’ world, it seems, the borders between reality and dream, consciousness and sub-consciousness are blurred and eroded.

On Constant Connection, Erasers’ music might be deeply evocative of landscape but it’s never clear which one. The vast, open terrain that surrounds Perth is dusty, burned by the sun into desert and Constant Connection feels like the product of the heat and relative isolation, the altered states these elements can create. But it’s these altered states of mind that appear to be the real landscape described by Erasers. It’s a landscape that’s hazy, in-and-out of focus, with emotional undertows pushing and pulling you into a weightlessness. On album closer Easy To See the band dispense with percussion all together, field recordings of the water at the edge of their native city ushering in two duetting synths. Orchard’s vocal undulates with the flow, viewing both the geographical and psychological landscape from the perspective of a consciousness not bound by bodies and from a timescale measured in millennia. The album ends as it begins, with field recordings of the real world that the music seeps out from, temporarily, before regressing back into the other realm it feels like it belongs to.

Between these two recorded hints of reality, Erasers manifest a deeply sensual dreamscape that constantly feels like it’s dissolving at its seams. A desert psychedelia emanating from a real world that might not be that real in the first place.

Live, Erasers have shared the stage with fellow travellers The Soft Moon, Grouper, Acid Mothers Temple and Prince Rama and are solid stalwarts of the Australian scene. After multiple tours in Australia and New Zealand, in 2019 they completed their first European tour. Erasers have sculpted their live show into a trance masterclass weaving organ drones and snaking guitar-and- synth interplay with Rebecca Orchard’s towering cantations. Gliding down the line between psychedelic minimalism and defined pop-structures.