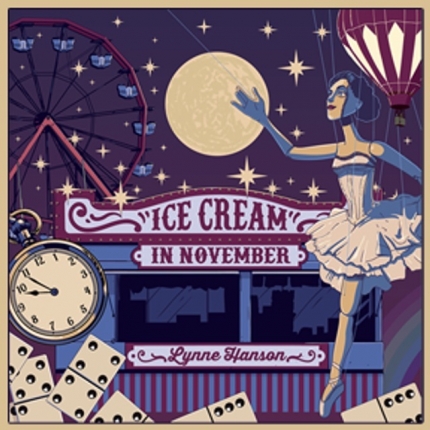 Ottowa’s Lynne Hanson is known as “Canada’s Queen of Americana”, a name she has earned over a fine career that has so far featured eight solo albums and a multitude of awards. Her ninth release, Ice Cream In November, features both a memorable title and some very good tracks across a wide musical landscape.

Lynne Hanson typically serves up cleverly constructed songs, delivered in her fine bluesy voice. Understandably keen not to be pigeonholed, her last album Just Words featured a good variety of music and that more eclectic approach is used again here. The album was recorded by Hanson and multi-instrumentalist Blair Michael Hogan in their home studios over two months in late summer 2021.

The opening track and single Shadowland has a surf guitar riff and an old school country feel. Another single, Hip Like Cohen, is a more upbeat pop orientated track, while In On A Wing is a positive love song with characteristically clever lyrics. One Of These Days matches an optimistic sound with world weary lyrics and works well.

The slower songs on the album really stand out. The title track exudes loneliness and sorrow in a lovely song that has a vast range of sonic effects bubbling under the exquisite vocals. Orion’s Belt is quite beautiful with clever lyrics and another fine vocal performance, again looking back to a past relationship. Puzzle Pieces expresses the search for answers in life very nicely, the vocal harmonies on the chorus especially beautiful.

Hundred Mile Wind is a more typical sounding Lynne Hanson track, a wistful tale of lost love featuring some fine guitar work. Birds Without A Feather has a similar feel but with a rhythmic pulse running through it, while Dominoes has an almost Latin guitar sound.

Ice Cream In November is a good album with several standout tracks. Lynne Hanson’s many fans will appreciate her typically Americana tracks, but the diversity of the musical approaches used here also adds to its appeal. The strong emotions displayed in the slower tracks make them memorable, delivered as always with real style in that great voice.