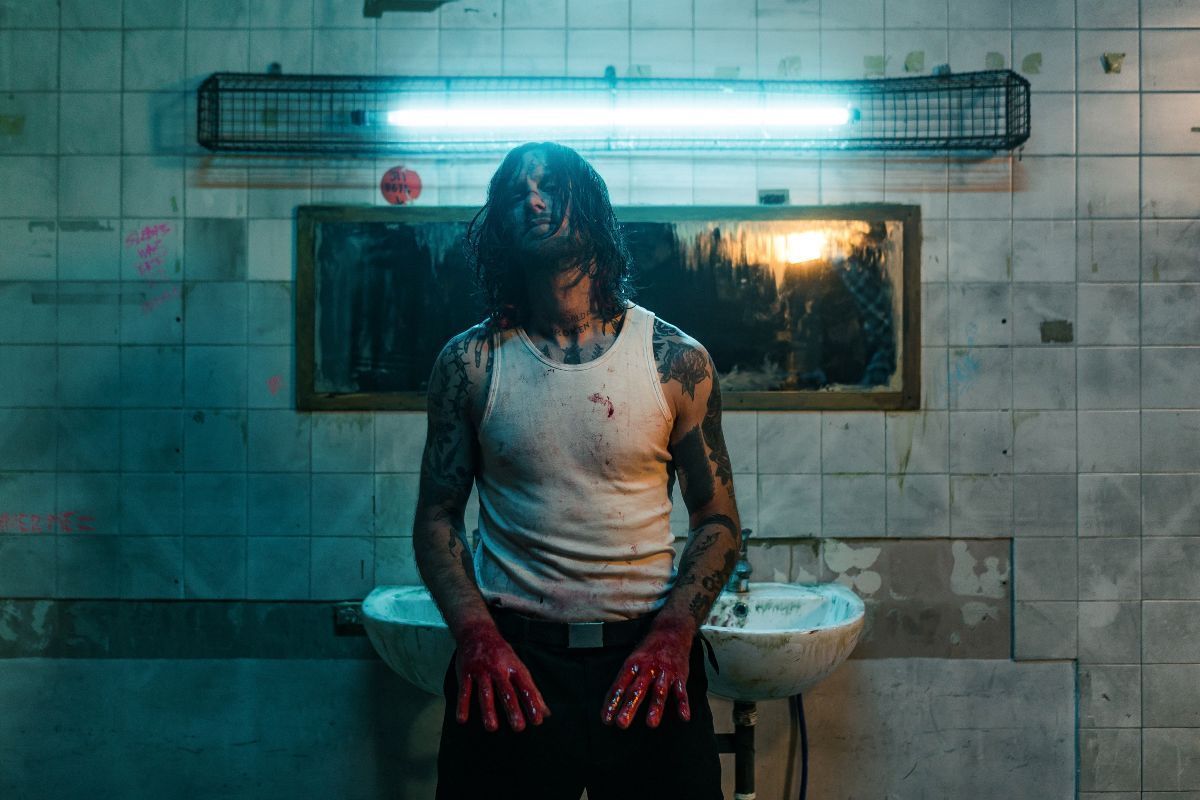 WHILE SHE SLEEPS have released their new single ‘EYE TO EYE’ with a cinematic epic of a music video, clocking in at over seven and a half minutes, directed by the band themselves and featuring a star turn from vocalist Lawrence Taylor who plays two versions of himself in the bloody fervor.

“With this song and video, we wanted to push our DIY attitude to the limits, especially with the visuals,” says guitarist Mat Welsh when speaking on ‘EYE TO EYE’. “The entire video was directed and filmed by the band. We came up with the concept, built the sets, designed the choreography, wrote the score, directed the acting, and cut the edit. It’s our biggest visual project to date.

The song is born from an idea we’ve had for the past few years. We knew it would grow into a great Sleeps song but have never had the time within an album to focus on it and develop the idea into what it is today. It’s definitely an amalgamation of the last 10 years of the band. We wanted something that felt thrashy and something you can really blow off some steam to when you’re playing it live. We know from filming the video that it feels incredible in a room full of people. The song also contains gang vocals from Sleeps Society members – we recorded them at the warehouse (the band’s creative space in Sheffield) with 100+ people and also had members send in their vocals so we could get them on the song.

We wanted the video to visually present what one can feel in the midst of a mind attack of any kind. Wherever the negativity is coming from, we always seem to split ourselves into two. The one who’s in pain, the one running away internally, and the one causing the pain. It’s always a battle with ourselves and we get lost in between these storms.

The reason we wanted this to feel so disturbing is to illustrate the sheer torment the mind can generate within us all, which to anyone on the outside is completely invisible. This should serve as a wake-up call for us all to remember that each and every one of us can put on a brave face, and we often do, but no one really knows the extent of our internal universe. So it’s a way to remind us to stay compassionate to others as we walk through life.”

‘EYE TO EYE’ will feature on a new expanded Special Edition of While She Sleeps’ fifth album ‘SLEEPS SOCIETY’, which will be out 03 June via Search & Destroy / Spinefarm and adds five new and re-imagined tracks to the original, including a version of ‘SYSTEMATIC’ with Enter Shikari’s Rou Reynolds on vocals. The original version of the album was released in April 2021, to critical and fan acclaim. The band chose a non-chart-eligible retailer local to them to push the album, which racked up first week numbers that would have landed them in the Official Charts Top Ten.

Co-produced by While She Sleeps guitarist Sean Long and longtime collaborator Carl Bown, ‘SLEEPS SOCIETY’ is up for Best Production at this year’s Heavy Music Awards with the band also nominated in Best Live Artist and Best UK Artist categories. The album’s single ‘NERVOUS’, which features Simon Neil of Biffy Clyro on guest vocals, reached the BBC Radio 1 Playlist, provoking discussion around mental health struggles and coping strategies, drawing upon Sean Long’s own experiences with anxiety.

‘SLEEPS SOCIETY’ (and its expanded edition) is a true manifestation of While She Sleeps’ extremely close relationship with their fans. Members of the band’s Sleeps Society subscription service (powered by Patreon and launched alongside the album’s initial launch) have been gaining access to exclusive perks and receiving insight, and even input, into the working of the band and production of their material and tours. While She Sleeps recently put on and played the first members-only Sleeps Society gig at Rebellion in Manchester.

2022 will see While She Sleeps flex their profound live prowess worldwide, appearing at a plethora of European festivals including Hellfest, Graspop and Hurricane & Southside. They’ll also be heading out to North America to support Wage War and will be headlining in Australia. In addition, Sleeps are main support to Parkway Drive on their UK and European arena shows later in the year.

‘SLEEPS SOCIETY’ SPECIAL EDITION TRACK LISTING:
01 ENLIGHTENMENT(?)
02 YOU ARE ALL YOU NEED
03 SYSTEMATIC FEAT. Rou Reynolds
04 EYE TO EYE
05 NERVOUS FEAT. Simon Neil
06 PYAI
07 KNOW YOUR WORTH (SOMEBODY)
08 NO DEFEAT FOR THE BRAVE FEAT. Deryck Whibley
09 THE ENEMY IS THE INNER ME
10 DIVISION STREET
11 SLEEPS SOCIETY
12 FAKERS PLAGUE
13 THE LONG WAY HOME
14 YOU ARE ALL YOU NEED (Acoustic)
15 CALL OF THE VOID
16 DN3 3HT